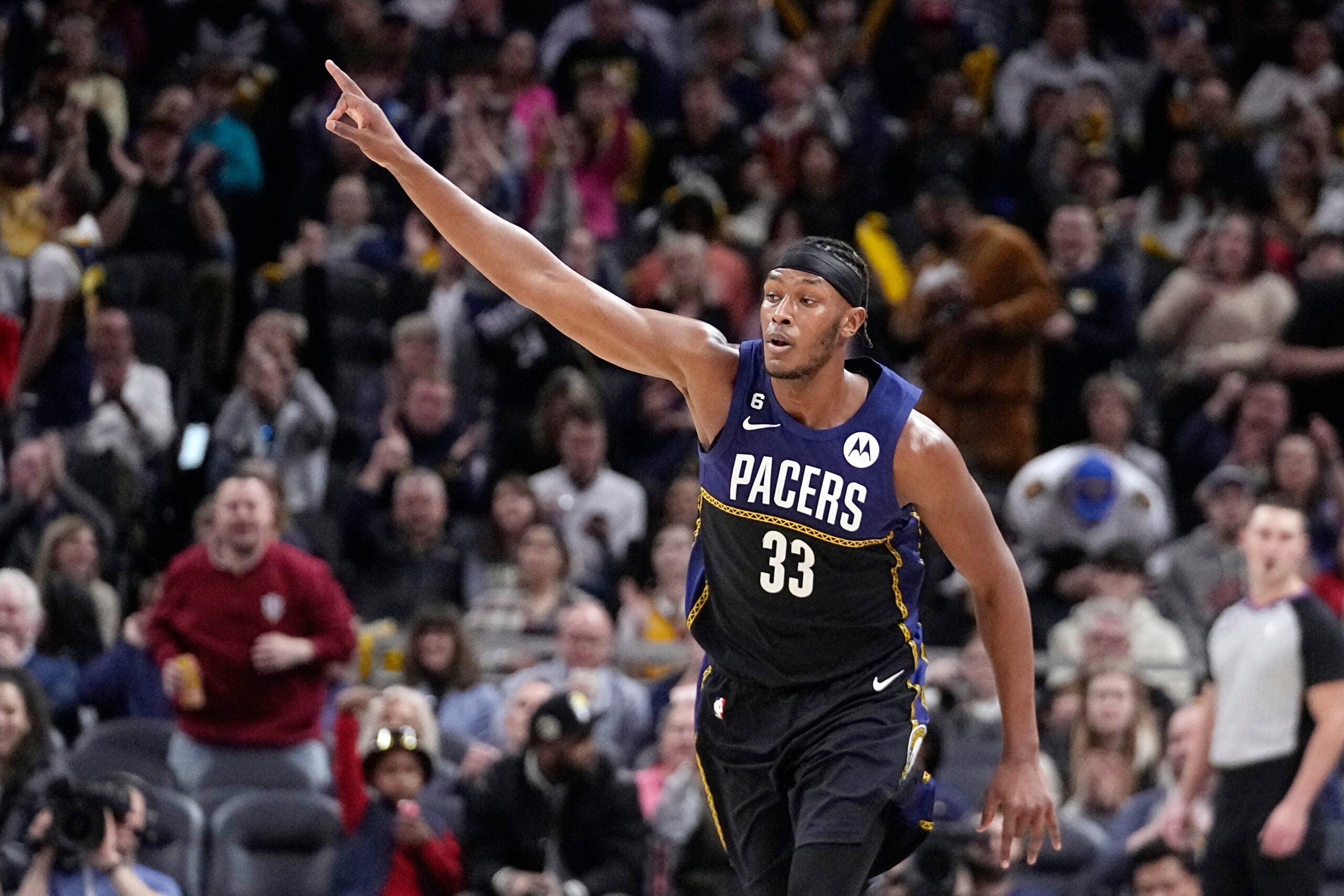 This week it was reported that the Celtics are interested in acquiring Spurs center Jakob Poeltl in a trade.

Boston is not the only team in on Poeltl, however, as Toronto is expected to try and reunite with him before this year’s trade deadline. Depending on the desperation of the Raptors, who currently sit a half game out of the Eastern Conference play-in, the price for Poeltl may get too high for the Celtics.

If Boston decides to bow out of the Poeltl race, there are other centers that could be available if the Celtics come calling.

In the final year of his contract, Myles Turner has heard his name all throughout trade rumors. Most of the attention came this summer when it was expected that the Pacers would continue to rebuild their roster for the future, focusing on young talent like Tyrese Haliburton and Bennedict Mathurin while cashing in on veterans like Turner and Buddy Hield.

Indiana chose to let the season play out for a couple of months however to see if head coach Rick Carlisle could make something work with the players they had.

So far the Pacers have exceeded expectations, but last week’s injury to Haliburton has seriously darkened their outlook on the rest of the year. Prior to his injury on Jan. 11, the team was 23-18; they have since lost four straight and are eighth in the East.

With no set timetable for Halliburton’s return, now is the time for Indiana to go full sell mode and try and grab the best draft spot possible from this season. The first two names that have to go are Turner and Hield.

If the Celtics are the team that moves on Turner, they would be getting a mobile rim protector playing the best basketball of his career. Turner is shooting 39 percent from three this season on four attempts per game, scoring 17.4 points per game and blocking 2.3 shots per game. Turner is also shooting 65 percent on two’s this season.

In terms of how he’ll fit into Boston’s team, imagine him as a combination of Rob Williams and Al Horford, bringing the athleticism and rim protection of Williams while spacing the floor like Horford.

He should be able to play alongside either of the Celtics’ two top big men as well. He can play Williams’s roamer spot on defense with Horford playing the traditional five while both space the floor on offens. When paired with Williams, he can take Horford’s on-ball defensive duties and let Williams do his damage as a lurker.

If Boston is seriously interested in getting the deal done, the financials shouldn’t be too complicated. Turner is on an expiring $18 million contract that the Celtics can match using a combination of their trade exceptions and current salaries.

Their highest exception is $6.9 million, and they also have the contracts of Payton Pritchard, Justin Jackson, and even Danilo Gallinari that they could use to help match.

Gallinari could be a useful trade chip just for his salary contributions as he is owed $6.5 million each of the next two years but is 34 and out for the year with an injury.

A package of Pritchard, Gallinari, and a package of future picks should be enough to wrestle Turner away from Indiana.

While Turner is a potential target for his production this season, Mo Bamba may be one for the opposite reason.

After playing 26 minutes per game last season, Bamba is down to just 18 this year for the Magic and has multiple DNP’s this year based on the coach’s choice. His playing time has been greatly reduced mostly to the emergence of Bol Bol and the continued growth of Wendell Carter Jr. With Jonathan Isaac’s return on the horizon his playing time won’t get any more robust.

With the reduced minutes in the rotation and Orlando’s continued rebuild, the 24-year-old Bamba should be up for grabs.

While his numbers don’t fly off the page, Bamba has incredible athleticism, a high IQ, and a solid stroke from beyond the arc.

His best season came last year when he started in 69 of 71 games and scored 10.6 points per game while shooting 38 percent from three on four attempts per game.

Bamba could play a similar role to Turner for Boston, spreading the floor on offense and blocking shots on defense while allowing Williams and Horford to get some rest on the bench.

Bamba is not the player that Turner is but he is three years younger, is signed to a two-year contract at $10 million a year, and could be had for a lower price.

Holmes is a closer player to Poeltl in terms of style than Turner and Bamba. Over his past four years with Sacramento he’s played as a more traditional center rather than a floor spacer.

During his time with the Kings, Holmes has started in 136 of 177 games, averaging 11 points and seven rebounds a game, but he has seen his playing time flattened this year. The continued dominance of Domantas Sabonis and the production from rookie Keegan Murray has kept Holmes out of the starting front court, and for the season he’s averaging just 8.8 minutes per game.

Without a set spot on a Kings team that could be looking to upgrade their backup point guard spot, Holmes could be involved in a win-now trade for both Boston and Sacramento.

The current backup point guard for the Kings is Davion Mitchell, and while he’s a defensive weapon, his offensive output just isn’t up to the standard that the team needs.

The Celtics on the other hand have a loaded backcourt rotation that has forced Pritchard to the outside.

In Pritchard, Sacramento can get a proven playoff contributor who can bomb the ball from deep and command a second unit’s offense. In Holmes, Boston can get a dependable backup center who can help ease the burden placed on guys like Luke Kornet and Blake Griffin.

The contracts also match up pretty well for both teams. Holmes has another year left on his contract at $12 million, plus a player option for the 2024-25 season. A combination of Pritchard, Jackson, and Gallinari would allow the Celtics to match it without using a trade exception.

Get breaking news and analysis delivered to your inbox during basketball season.