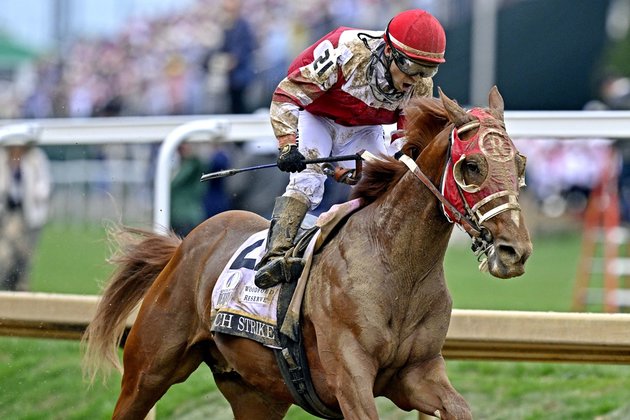 Rich Strike came off a blistering pace at odds of more than 80-1 to beat 19 blue-blooded opponents and produce one of the biggest upsets in history while capturing the 148th running of the Kentucky Derby on Saturday afternoon at Churchill Downs in Louisville, Kentucky.

Rich Strike, who was only entered into the field on Friday when Ethereal Road was scratched, is trained by Eric Reed, and owned by RED TR-Racing. Sonny Leon, a journeyman jockey based in Ohio, rode Rich Strike and won his first Kentucky Derby in his first ever attempt.

Rich Strike, a son of Keen Ice, was claimed by Reed for $30,000 after winning a maiden race at Churchill going a mile in September by 17 1/4 lengths.

Race-favorite Epicenter was second by a length, with Zandon third by another half-length

Rich Strike had raced just seven times before the Derby, winning once and finishing third three times. He finished third in the Jeff Ruby Steaks (G3) on the synthetic track at Turfway Park on April 2. Rich Strike and has been training forwardly at Churchill.

The winner found his way through the field after starting in the 21st and far outside post position and under the fastest opening quarter mile in race history.

Rich Strike was still far back under a very fast pace as the horses turned for home down the long Churchill Downs stretch but went to the rail to save ground. Leon moved out to get past a fading Messier and then returned to the rail to run down Epicenter and Zandon, who were eye to eye with the finish line in sight but could not hold off the winner.

The winner is the second longest shot to win the Derby after Donerail took the post at 91-1 odds to win the Run for the Roses in 1913.

Southern dodges downpour to get in Tuesday’s practice as season opener nears | Baton...