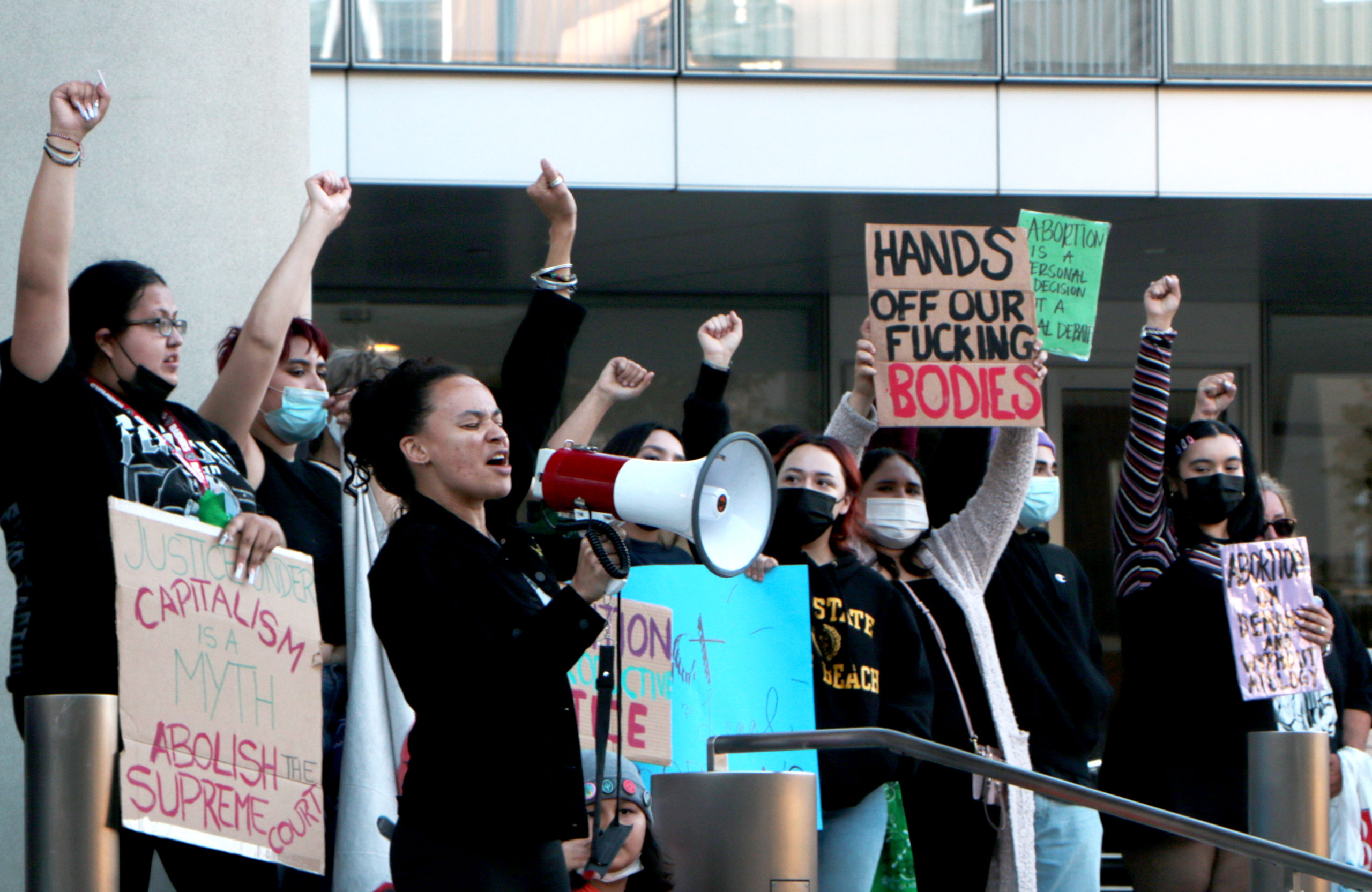 The draft of the decision was leaked on Monday to the media outlet Politico. If the Supreme Court votes to overturn Roe V. Wade, abortion laws would be controlled by the states, which would ultimately result in many states restricting or banning abortions completely.

Bates explained how Black women and other women of color would suffer the most from abortion bans.

“Reproductive justice is about full bodily autonomy and healthcare, and we have to be honest about the fact that black and brown people and black and brown women have never had full access to their bodies,” Bates said.

The rally began with several speakers who shared their thoughts regarding the leak. They also led chants that the crowd engaged in, such as “Right-to-life your name’s a lie, you don’t care if women die.”

The crowd then marched the streets, where they marched along Broadway, starting from Magnolia Ave to Pine Ave, then continued up to 3rd St and back up to Magnolia Ave, making a full circle.

About halfway through the march, a police car approached the crowd from behind and told everyone to move to the sidewalk, but they refused and continued to walk on the street for the entirety of the march.

Among the crowd of the rally was Katie Stanton.

“I’m here today because I’m furious with such a deliberate abandonment of women, honestly,” Stanton said. “It literally means the difference between life and death for some women.”

By having a history of working in reproductive health, Stanton knows first-hand what an abortion can mean for some women.

“I’ve worked in a reproductive health clinic and I’ve helped women on one of the worst days of their lives. It’s never an easy decision, but it’s their decision and it’s their right,” Stanton said.

Stanton also discussed her concern on how abortion rights are not the only thing that’s at stake right now.

“There’s so many things that this affects, and the fear of taking away my right to possibly marry my fiance who’s a woman,” Stanton said.

“When I was a young girl, there was no abortion,” Sergy said. “I’ve been coming to these (rallies) for a long time. I’m very concerned about not just the end of abortion, but how this is the beginning of such a negative, dark thing, trying to take away access to birth control and gay rights.”

Sergy urges people to wake up and take action.

“Wake up, folks. This is going to be our world here in the United States. I find that unacceptable,” Sergy said.

This was one of several rallies that took place in Long Beach throughout the week, and it is foreseen that many more will come in the near future.