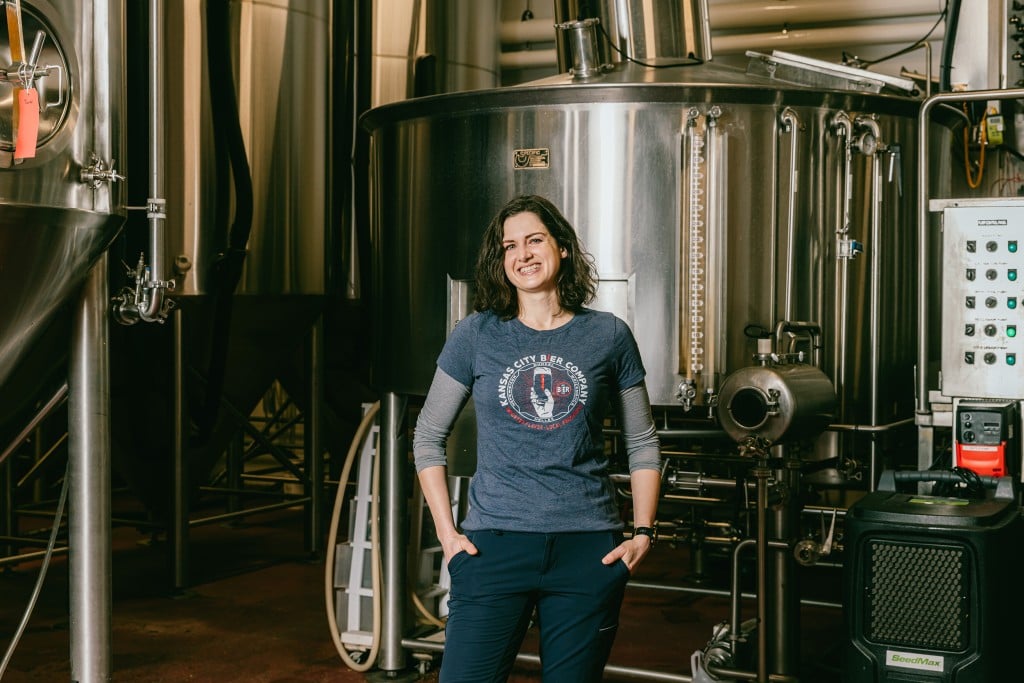 Elizabeth Belden stands amid the gleaming cylindro-conical fermentation tanks at Kansas City Bier Company. The last date they were chemically cleaned is written in blue ink on a whiteboard. Nearby, an industrial centrifuge whirs out the last bits of sediment from an IPL, KC Bier Co.’s German take on an IPA.

Belden traces the path of a pipe from one tank to another, then up the wall and across the ceiling to show me how everything in the brewhouse is connected. Over the mid-range thrum of machines she yells, “Everything’s really manual here. If something’s not flowing the way you think it should, just follow the hose.”

A sweet-sour earthy smell permeates the space at KC Bier Co. When Belden hands me a glass of fresh, not-yet-filtered IPL, I can smell the same notes in the beer.

Belden didn’t plan to be here when she sat in her University of Missouri—Kansas City dorm room, staring at the newly-opened Stowers Institute for Medical Research. She wasn’t happy with the medical program, nor the six-year study path ahead. Her classes didn’t capture her like she thought they should. So she just started spamming the emails of anyone she could find on the Stowers Institute website. Didn’t matter what kind of lab, she just wanted to know more about their research.

“I cold-called Stowers and ended up being an intern there. I was way more interested in that, so I switched to biology. Then there was someone in my last class who was about to give her notice as a part-time employee in the microbiology lab at Boulevard Brewing Company, and I thought, ‘I don’t know a lot about beer, but it’s a lab, so I can probably do that,’” she says with an air of nonchalance.

“I can probably do that” turned into more than a decade of experience in the quality assurance lab, and a level of fame within the Kansas City brewery scene for her exceptional work behind the curtain. KC Bier Co. sought Belden to set up their lab six years ago.

What was supposed to be a temporary gig evolved into the platform for our city’s secret weapon in the booze scene. 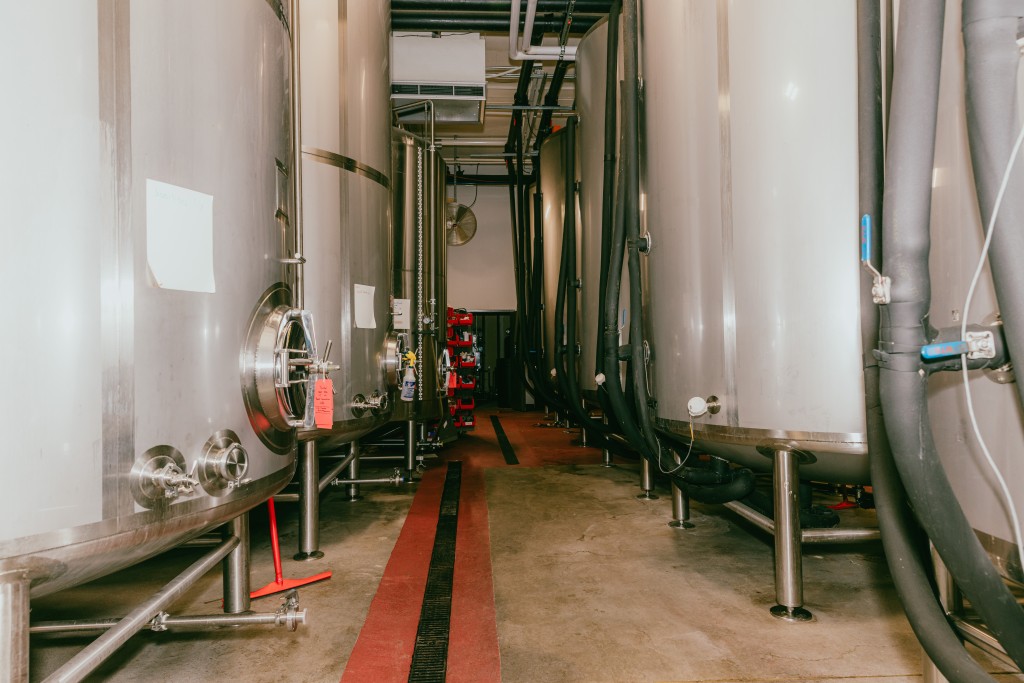 When we get to the lab, I realize I’d imagined it as a commercial kitchen-sized room of metal tables with ongoing experiments, test tubes, blue-flamed Bunsen burners, and beeping machines—but Belden opens the door to a room the size of a nice closet. With the two of us inside it’s cramped.

Belden says this is a lot more than most small breweries have. She shows me the sterilizer, the test strips, and a few bottles, then dives into her computer with the nervous energy of someone who needs a task. In the well-organized room, it’s easy to envision Belden alone, running analytics and using the PCR tests we’ve all gotten to know well.

But instead of COVID, she checks for microbial DNA that produces “off” flavors. Belden explains that kegs are simple. The hermetically sealed environment typically prevents any unwanted bacteria from flourishing. So, even if something is present, it won’t alter the taste. Bottling is where the problems arise. Bottles contain trace amounts of oxygen, get exposed to light, and encounter temperature changes. These variables provide a hospitable home for contaminants.

“In a bottle, some of the bacteria will metabolize and eat the sugars and create lactic acid, for example, so it ends up tasting like a sour beer,” Belden says.

Ensuring the beer tastes how it should is the bottom line of what Belden does. After all the explanation of tests, data, and research I nod through without totally understanding, I see that at the bottom line Belden is the conservator of taste at KC Bier.

“We do a sensory panel every Wednesday, and a lot of the time, it’s just to take a look at how things are aging,” she says.

The sensory panel compares new bottles with those three to six months old—in essence thinking about that bottle you forgot in the back of the fridge. Due to Belden’s efforts in the lab, and the rigorous schedule of cleaning and rotating cleaning agents, that little bottle left behind should taste the way you want it to.

“The time shows less than I would think, which is a testament to our packaging people,” she says, sidestepping the spotlight. Instead of touting her own talent in this process, she brings up one of the many small details she retains from her early lab work in school.

“If a fruit fly lands close enough, I can tell if it’s male or female. They like beer so I see a lot of them.” 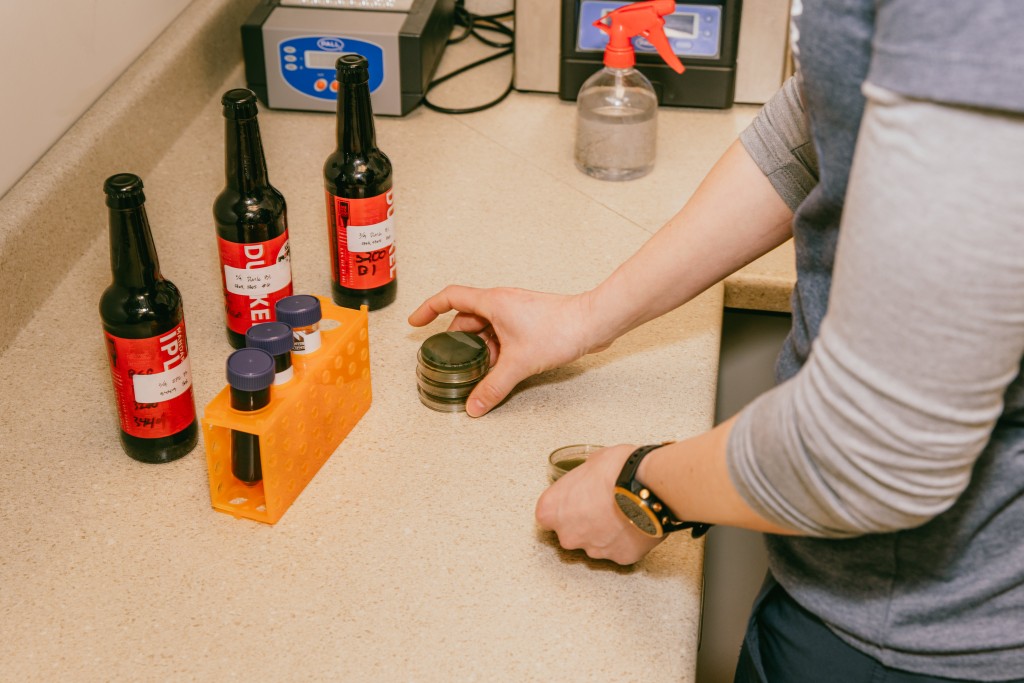 Belden is thriving at KC Bier. She judges international beer competitions. She’s an officer for our regional chapter of the Master Brewers Association of the Americas. She’s even cultivated a professional relationship with her former employer because she believes that a community of brewers make better beer. But, as we talk, the conversation often veers to Boulevard.

Boulevard Brewing Co. was where Belden spent her time from age 23-33. Her time there turned sour when the company was purchased by Belgian company Duvel Moortgat in 2013. What had been a dream job, which Belden had made into the cornerstone of her identity, suddenly began to unravel as communication, priorities, and production choices strayed further from what the company once stood for.

“Little memories keep coming back and I’m like, fuck, I’m mad about a thing that happened 10 years ago,” Belden says.

The sudden shift in work environment took enormous effort and time to process. That often meant reliving wounds—and coming face-to-face with people who minimized the experience.

“You try to talk to friends not in the industry and they’re like, ‘What could be so bad? You work in alcohol. It sounds so fun.’ But you’re being gaslit, and it’s not fun,” says Belden. “Yeah, it’s beer, but it’s also my fucking livelihood, and I don’t want to hate it.”

“There were instances when I would not ask my supervisors a question because the odds of getting a good response were so low. I’d either get made fun of or get dismissed. I just stopped asking questions, so I stopped learning,” she says.

Belden says it took being at KC Bier Co. for a while to understand she was good at her job. It took time to rebuild her career and professional self-worth after years of being put down and brushed aside.

“When you hear only negative feedback for long enough, it’s the kind of thing that starts to get in your head,” she explains. 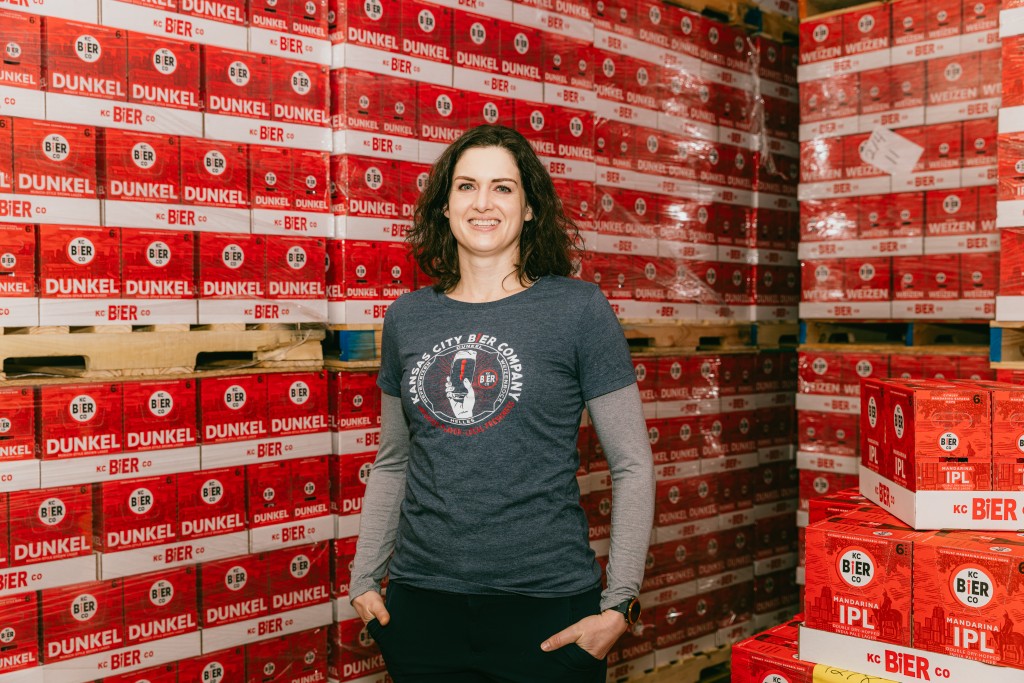 Elizabeth Belden stands by her product. // Photo by Chase Castor

The rebuild is going well. Now that Belden is out of the Boulevard bubble, she’s found her peers through judging competitions and organizing Master Brewers meetings. In this expanded community, there are other women who share her experience.

“It’s nice to talk to them about how people are suddenly interested in what we’ve been dealing with for the past 15 years. You could have asked us a while ago if we like being talked down to. We don’t,” Belden says.

But those speedbumps have only served to inspire Belden to push harder—for herself and for the community.

“My hope for KC is that we can be a unified beer community, instead of thinking each thing we release is digging in to make something just for ourselves,” she says. “You can start something from scratch, and I try to be there when anyone is struggling. I know it’s a dumb cliché, but ‘no man is an island,’ and I like when the world sees KC’s island becoming exponentially bigger and better. I’m not the smartest person in beer, but I know where to send people. There’s nothing we can’t accomplish.”

Belden isn’t sure what’s next. When I ask, she shrugs and says she’s really happy where she is. Then she grins and rushes into the nuances of the beer she’s making for KC Bier Co.’s anniversary celebration.

Watching her excitement, I almost feel guilty for asking about the future. Sometimes it’s enough to enjoy where you are.

‘One of a kind’: Lafayette residents with ties to England pay tribute to Queen...