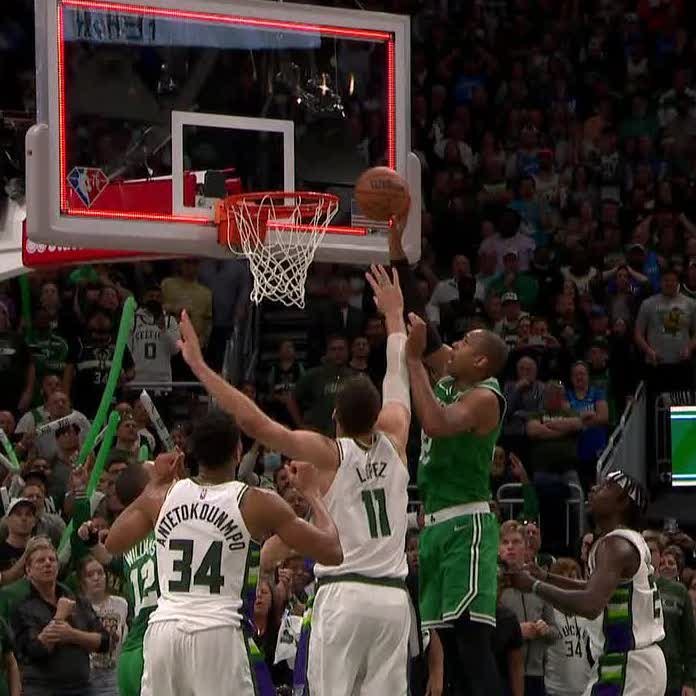 Baseball great Yogi Berra once quipped that “it ain’t over until it’s over.” For the Milwaukee Bucks, game three of the Eastern Conference semifinals ended just in the nick of time on Saturday afternoon.

What was once a 14-point lead for Milwaukee had evaporated to a two-point game in the closing 4.6 seconds, with the Bucks just needing a defensive stop to take a 2-1 lead in the series. Boston’s Marcus Smart was fouled behind the three point line, but the foul was ruled to be committed on the floor rather than in the act of shooting, giving him two free throws instead of three. Smart then had to intentionally miss in order to get the ball to a Celtics player and try to send the game to overtime. What ensued was a scramble under the net with Boston getting four chances to tap in what would be the tying bucket. Al Horford’s effort for Boston would eventually go in, but replay confirmed that the ball was still on his hand as the final buzzer went off, meaning no basket, and Milwaukee wins, 103-101. It was the kind of sequence that would have even the most casual of basketball fans out of their seat.

Prior to that, there was certainly plenty of great basketball on display in a matinee between two very evenly matched teams. Neither team could manage to pull away in the first half, with the Bucks’ defense holding strong against Boston’s big three. Jason Tatum, who has been an offensive force all season, was held to just 10 points overall, and went just 4-16 from the field, missing six three-pointers in the process. A short run would put the Bucks up six at one point, but Boston would retake the lead and extend it to four by halftime.

The real battle for the Bucks, however, was with the officiating. Brook Lopez, Grayson Allen, and Giannis Antetokounmpo all had three fouls by halftime, which restricted their defensive efforts to some extent going toward the break. The fouls on Giannis were offensive charging calls, and it made for several close moments that could have went either Milwaukee or Boston’s way in the second half, whenever he would drive to the lane as he’s done all season. Lopez picked up a fourth foul just seconds into the second half, and it was a bit of a wonder as to who might be able to remain on the floor down the stretch for Milwaukee.

The third quarter made it seem like the Bucks were going to comfortably coast into game four on Monday night, as they had their highest scoring quarter of the postseason with 34 points, while Boston had their worst with just 17. A late run for the Celtics in the fourth quarter was partially driven by Milwaukee’s foul trouble situation, as well as some big shots from Al Horford. Fortunately for the Bucks, time simply ran out on the Boston Celtics on Saturday, and Milwaukee will get the opportunity to extend their series lead on Monday night before heading back to Boston.

Outside of Fiserv Forum, the weather and weekend scheduling made perfect conditions for the Deer District watch party to feel like Milwaukee’s 2021 championship run all over again. Thousands of fans packed into the entertainment district, and will be encouraged to do so once again Monday night.

Game four of the Eastern Conference semifinals will tip off at 6:30 p.m. on Monday night from Fiserv Forum, with a watch party beginning two hours prior at Deer District.

Allen Halas is a life-long Milwaukeean, and has been in and around local music for over 15 years. He is an avid Milwaukee Bucks follower, and general supporter of all that the city has to offer. Find him on social media: @AllenHalas.

Finding the story behind what may be Minnesota’s oldest rifle