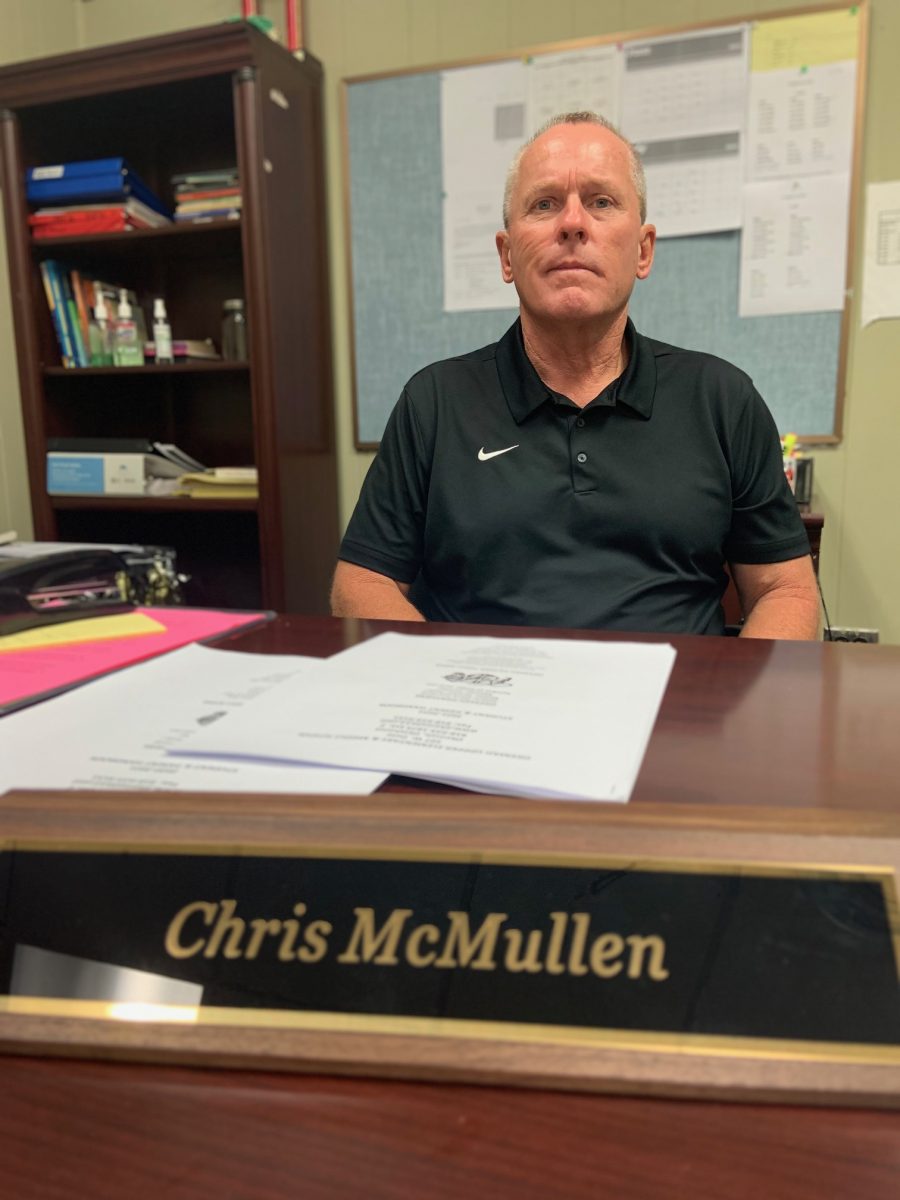 Your heart is your home, and all roads lead to home. For Chris McMullen, Okemah’s new Middle School Principal, his heart is home. Forty-six years after he walked the stage with his high school diploma, McMullen is back where it started for him in Okemah Public Schools.

On August 12, McMullen will be the new face at the door greeting the next generation of Okemah students. McMullen replaces Sandra Lambert who retired in May after 20 years of service to the district.
“I’m excited to be back where it started for me,” said McMullen.

McMullen graduated from Okemah high school in 1975. He was a student in the district from first through 12th grades. McMullen played football, baseball, and ran track for the Panthers. After graduation, he played football at East Central University (ECU) on a scholarship. McMullen earned both his bachelor’s and master’s degrees from ECU.

Before returning to Okemah in 2019, McMullen served as a teacher, coach and/or administrator in districts around the state including: Okmulgee, McAlester, Putnam City West, Tecumseh, Bristow, Warner, and Keyes.

In 2019, he moved back to Okemah, he said, with the intentions of retiring, but after a few weeks into the summer he found himself heading back to the gridiron to help coach an eight-man start-up football program at Grove Elementary in Shawnee. He has been there for the last two years until the opportunity opened up in Okemah. He said he has always wanted to work in Okemah and the opportunity to return is a nice way to start the final chapter of his career in education.

“I still feel good, I’ve got a lot of energy. The Lord has blessed me with good health. I still feel like I have a lot to offer the kids, staff, and community. I’ve always bled black and gold,” McMullen said. “I’ve always kept up with the Panthers. I’ve still got family here, friends here. I think it’s really cool that I started on this campus, and I’ll finish up my career in education on this campus.”

In 2015, McMullen was inducted into the Oklahoma Coaches Association Hall of Fame. He was selected in 1994 to be an All-State coach and in 1998 he was selected to be an Oil Bowl coach. The Bowl featured All-Star players from Oklahoma and Texas in a cross-state rivalry. In 1988, McAlester won a state championship where he was the defensive coordinator.

McMullen’s family from Okemah include: his father Stanley McMullen, who is a retired highway patrolman, his mother was Judy Morris Klutts, his grandparents were Harry and Pauline McMullen and Johnny and Bonnie Morris. His stepfather is Walter Klutts, who still lives in Okemah. He has a brother and three sisters. His sister Tonya Klutts is an Okemah graduate.

McMullen is the father of two children: Zac and Bailey. Zac is his heavenly child, and Bailey is his earthly child, he said. Zac lived life with special needs and passed away a few years ago in his early 20s, McMullen said. Bailey is 24 and is preparing to start her second year of medical school.

McMullen said it is his roots in Okemah that nourished his career as an educator. He said it was his junior high football coach, Mac Smith, who inspired him to be a coach. In addition to Smith, he said his typing teacher Mildred Kakony, history teacher Don Farmer, American history teacher Keith Robertson, and English teacher Connie Reilly also played pivotal roles in his life.

“My favorite all time teacher is Connie Reilly,” said McMullen. “She came my freshman year. She was my English teacher. She not only taught English well she took an interest in all student’s activities. She’d find out what sport or activity you were in and say she’d come watch you play (or perform). My junior year she put on this all-school play, Li’l Abner. She got the football players to try out for it. She was an amazing teacher. I’m still friends with her to this day.”

McMullen said one of his most vivid memories of his time as a student in Okemah came on November 22, 1963 — the day President John F. Kennedy was shot and killed while traveling in a motorcade in a Dallas. McMullen was a first grader on the same property in which he is now an administrator.

“It was an unseasonably warm, late November day. We were all outside playing over here, where none of these buildings were here now. It was probably 12:30 p.m. close to 1 o’clock. We were on lunch recess. The teachers came out and started blowing their whistles and calling everyone in and getting us in our classrooms. I remember Mrs. Parsons was my first-grade teacher,” said McMullen. “They began explaining to us that the President had been shot. They didn’t yet know he had passed away. They started calling parents and parents were checking us out. I remember cars were lined up on 3rd Street. I remember my mom picked me up and we were crying. Everyone was in shock. We were in a cold war with the Soviet Union. There was so much uncertainty. I was six years old. I didn’t actually know much other than something was bad. I will never forget that day.”

With a lot of memories from his own time as a student, McMullen said he looks forward to being a positive figure in the lives of the next generation of Okemah students.

“I’ve got a simple philosophy. Be where you’re supposed to be. Be on time. When you get there do what you’re supposed to do. That’s how I was raised. Not only at home but also here at school.”
When asked what makes Okemah special, one word came first for McMullen.

“The values you were taught growing up,” he said. “The work ethic. The teachers. I got a quality education here. I was prepared for college. My elementary teachers did an outstanding job of teaching the basics. They taught you respect, accountability, if you do something take ownership. Good or bad. My junior high and high school teachers also prepared me well. Not only academics, but also strong values. That’s what makes Okemah special to me.”

Police searching for 3 suspects in connection with mass shooting near West Philly rec...