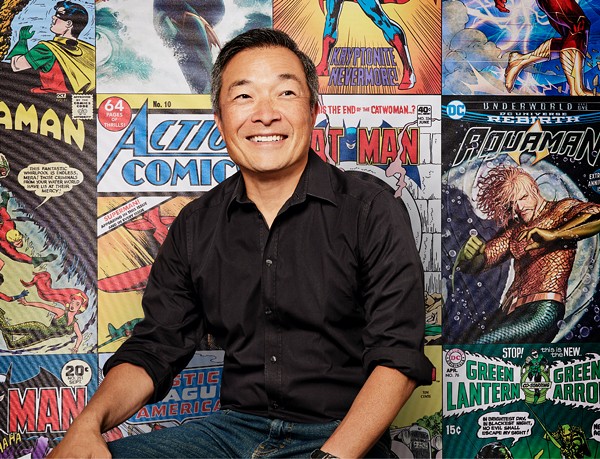 The year 1986 was an annus mirabilis for American comic books. It’s the year the public realized that comics were not just disposable entertainment for kids. This was largely due to the release of three important comics: Frank Miller’s Batman: The Dark Knight Returns and Alan Moore’s Watchmen, both of which deconstruct the myth of the American superhero, as well as Art Spiegelman’s Maus, whose graphic retelling of the Holocaust was the first comic book to ever win the Pulitzer Prize.

What’s often overlooked in discussions about this pivotal year is the new crop of comic creators whose careers began in 1986. They would go on to completely reshape the industry. One such creator is St. Louis native Jim Lee, who remains one of the industry’s biggest talents.

Lee is the world’s best-selling comic-book artist, a record he established when he relaunched Marvel’s X-Men franchise with a new No. 1 issue in September 1991. The book sold an estimated 8 million copies, a world record. Championing creator rights, he later co-founded Image Comics, which is now considered the “third pillar” of the mainstream comics industry (alongside DC and Marvel), before becoming the publisher of DC Comics, and the steward of some of the most recognizable superheroes in the world, including Superman, Batman and Wonder Woman.

Yet, aside from the kids who religiously read Wizard magazine in the ’90s looking for bios of their favorite creators, few St. Louisans realize Lee hails from the Gateway City. Even Sean Howe’s meticulously researched book Marvel Comics: The Untold Story, introduces Lee as “an excessively polite South Korean Ivy Leaguer,” never once mentioning his Midwest roots. Though he was born in South Korea, Lee’s life as a comic-reader-turned-artist and the foundation of his professional career all began here in St. Louis.

Jim Lee was born in Seoul, South Korea, on August 11, 1964. When he was five years old, his family moved to the United States due to increasing conflict between North and South Korea and relocated briefly to Ohio before permanently resettling in the St. Louis suburb of Chesterfield when Lee was nine.

After relocating to America, the whole family experienced a degree of culture shock. Lee had to learn English, which he did at first by watching Sesame Street and later reading comic books.

But it wasn’t easy for Lee to get his hands on his first comic books.

“Comics were hard to find,” Lee told St. Louis Magazine in 2010. “There was one place downtown that sold adult magazines, with a small area for comics. My parents took me there, and it was super embarrassing. All along the rows were images of naked girls. My parents were mortified, but we all just looked straight ahead,” he recalled with a laugh.

Lee was enrolled in River Bend Elementary School in Chesterfield when he began constantly doodling his favorite fictional characters. By the time he enrolled in St. Louis Country Day School (now MICDS) in 1974, Lee identified as a comic-book lover and outsider.

“It was in St. Louis where my fandom and love for comic books and all things nerdy really took shape, which is to say that it all happened more or less in secret,” he remembers. “I had a small group of like-minded friends, and we would spend our weekends playing [Dungeons and Dragons] or poker or just hanging out at the arcade at the mall.”

As a relatively shy immigrant who was surrounded by what Lee describes as the “preppy, upper-class” atmosphere of Country Day, Lee invested more and more of his time in reading and drawing comics. “I remember spending inordinate amounts of time in my bedroom just drawing and creating my own characters,” he says. “So my years in St. Louis were super formative in every way, especially as a time of both incubation and creative growth. All of which is funny to me now because everyone, especially my parents, saw my love of comics as a waste of time.”

By fifth grade, Lee had become friends with fellow student and South Korean immigrant Brandon Choi. Through grade school, the two collaborated on comics that would play a significant role down the road. Even as a kid, Lee started to recognize his skill as an illustrator. “I submitted my first artwork to Marvel Comics back when I was like 12 years old, thinking I was actually going to get hired.” Local legend has it that Lee was awarded the senior superlative “most likely to found a comic-book company.” Though mostly accurate, Lee clarifies his classmates’ prediction. “Well, all the ‘most likely’ predictions were meant in jest in some way, so I think the actual quote was that I was ‘most likely’ to start the next Zap Comix which was more subversive as a prediction.” Though Lee didn’t go the route of Robert Crumb’s iconic ’60s underground comic Zap, his classmates had no idea how correct their prediction would eventually become.

Lee did not immediately go into comics and opted instead to follow in his father’s footsteps and study medicine. He enrolled at Princeton University where he would earn a bachelor’s degree in psychology. An elective art class during his senior year reignited his passion for illustration. This was in 1986, just before Lee happened across the groundbreaking Dark Knight Returns and Watchmen, rekindling his desire to become a professional illustrator.

After graduating, Lee returned to St. Louis and made a deal with his reluctant parents: He would take a gap year before medical school and try to break into the comic industry. He put in at least eight hours a day drawing.

During the late ’80s, St. Louis had a much smaller comic community. “At the time, I think there were only two dedicated comic-book shops in St. Louis,” Lee says. Still, determined to make his dream a reality, Lee soon met a few local, professional comic artists. “I remember discovering in the Yellow Pages one day that there was finally a comic-book shop in Kirkwood, which was the first dedicated comic store that I remembered opening up in St. Louis. I would drive there as much as I could from west county, where we lived. It was at this tiny hole-in-the-wall store [that] I met artists like Rick Burchett, Don Secrease and Paul Daly — all of whom were working professionals already in the comics industry.”

These initial contacts were crucial for Lee. “They ended up being super helpful and influential in every way possible, because I really knew nothing about the industry, and there was no way to learn it unless you knew someone who was already working in the business,” he explains. “In fact, my very first professional, paying gig was doing finished inks/art over the pencil breakdowns of Don Secrease.”

Veteran artist Secrease helped Lee publish his first book, Samurai Santa. Lee was diffident as he introduced himself: His bio self-portrait only illustrates the top of his head. Yet, both Burchett and Secrease saw potential in the young artist and encouraged Lee to begin showing his portfolio to editors. Burchett elaborates, “[Lee’s] work was very accomplished. His drawing skills were assured, and it was easy to see they would continue to grow. The main thing, though, was his visual storytelling, a skill he hadn’t been taught that he picked up on his own. It’s the hardest and most crucial element in comic art. I suggested, rather strongly, that he attend a large con and show [his work] to as many editors as possible.”

Lee gathered his nerve and headed to New York.