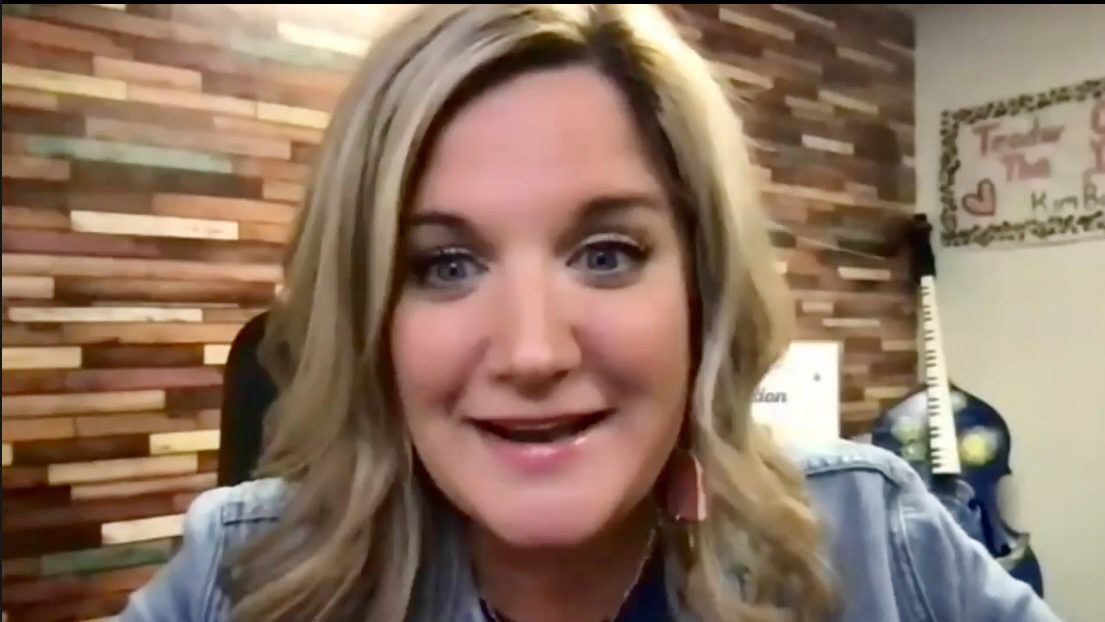 The Thursday program and announcement were virtual again this year, presented as a Facebook Live event, with each of the nine semi-finalists at locations of their choice surrounded by their supporters as the announcement was made.

Banz’s co-workers and administrators could be heard cheering and applauding in the background in her office at school as she looked shocked by the news (feature photo screenshot) and slowly spoke on a Zoom call, seeming to still try to realize the announcement that had been made.

“I feel very honored right now. I’m completely overwhelmed,” said Banz as co-workers patted her on the back. “Thank you to my parents who bought my first viola. Thank you to my administrators who support every idea I throw out there. To the other finalists, you all are outstanding. This is an incredible honor. Thank you to all my students throughout my teaching career. I would not be the teacher I am today without you.”

Banz was one of nine finalists who were chosen by a committee from among all the site teachers of the year from across the district.

Earlier in the afternoon all nine finalists were honored and cheered by district administrators, staff, and co-workers by a drive-through celebration in the parking lot of the Clara Luper Center for Educational Services at 600 N. Classen Boulevard.

The nine finalists were:

“Our district is full of amazing teachers, and we are proud to celebrate the dedication of all OKCPS teachers now and throughout the year,” said Mary Mélon, President and CEO of The Oklahoma City Public Schools Foundation. “Our Stars of Education program allows us to shine an extra light on our nine Teacher of the Year finalists and our Oklahoma City Public Schools Teacher of the Year. These individuals represent the best of the best this year and we are so proud to recognize them and tell their stories.”

Two runners-up for Teacher of the Year were named in the same ceremony from among the finalists. They are:

“What a gift it is to hold up the mind and heart of a child as they learn to love themselves and the journey of learning. OKCPS is overflowing with positively radiant students who are championed by thousands of educators, support staff, and administrators,” Akagha, the band and orchestra teacher wrote for her biography.

“I truly believe that teaching is an act of love. Our students reflect that belief every day as they grow socially, emotionally, and academically inside our school building, participate in extracurricular activities, athletics, and enter our community with confidence,” special education teacher Farrell wrote in her biography.

Principals of the Year

About a week earlier, the recipients of the Sam and Charolet Shirley Outstanding Principals Award for the 2021-22 school year had been named by OKCPS and were honored Thursday night. They are:

“Leadership is critical for creating a culture of excellence,” Mélon said. “Richelle and Deserae lead by example fostering trust and building strong relationships with their students, staffs, families and the community. Both are shining stars in our school district and truly make a difference for our students.”

Japan cannot survive without Russian oil, warns the head of a trading house

Wife recalls trying to save officer killed in mass shooting

The Biden administration will end the monkeypox public health emergency