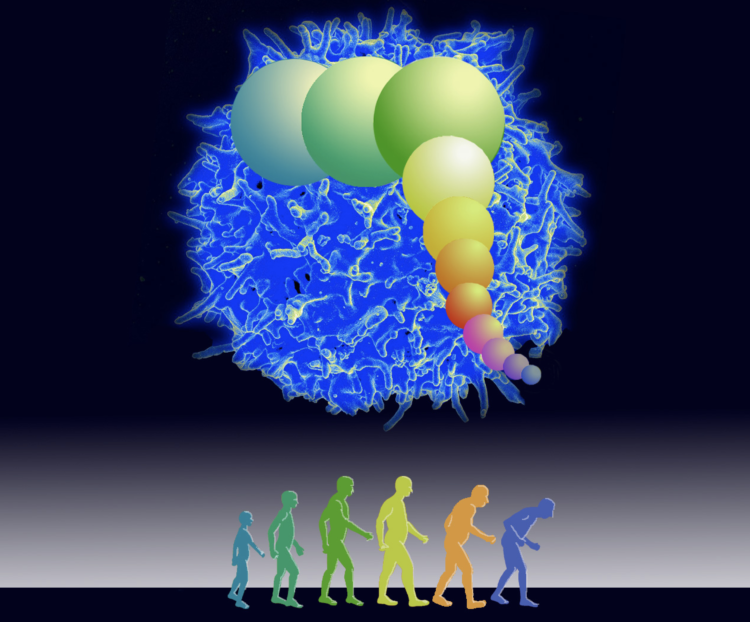 This illustration represents the core theory in a new modeling study led by the University of Washington: The circles represent the immune system’s aging, in which its ability to make new immunity cells remains constant until a person (represented by the human figures) reaches middle-age or older and then falls off significantly. The central blue figure represents an immune system T cell that attacks the virus.Michele Kellett and James Anderson/University of Washington

Your immune system’s ability to combat COVID-19, like any infection, largely depends on its ability to replicate the immune cells effective at destroying the SARS-CoV-2 virus that causes the disease. These cloned immune cells cannot be infinitely created, and a key hypothesis of a new University of Washington study is that the body’s ability to create these cloned cells falls off significantly in old age.

According to a model created by UW research professor James Anderson, this genetically predetermined limit on your immune system may be the key to why COVID-19 has such a devastating effect on the elderly. Anderson is the lead author of a paper published March 31 in The Lancet eBioMedicine detailing this modeled link between aging, COVID-19 and mortality.

“When DNA split in cell division, the end cap — called a telomere — gets a little shorter with each division,” explains Anderson, who is a modeler of biological systems in the School of Aquatic and Fishery Sciences. “After a series of replications of a cell, it gets too short and stops further division. Not all cells or all animals have this limit, but immune cells in humans have this cell life.”

The average person’s immune system coasts along pretty good despite this limit until about 50 years old. That’s when enough core immune cells, called T cells, have shortened telomeres and cannot quickly clone themselves through cellular division in big enough numbers to attack and clear the COVID-19 virus, which has the trait of sharply reducing immune cell numbers, Anderson said. Importantly, he added, telomere lengths are inherited from your parents. Consequently, there are some differences in these lengths between people at every age as well as how old a person becomes before these lengths are mostly used up.

Anderson said the key difference between this understanding of aging, which has a threshold for when your immune system has run out of collective telomere length, and the idea that we all age consistently over time is the “most exciting” discovery of his research.

“Depending on your parents and very little on how you live, your longevity or, as our paper claims, your response to COVID-19 is a function of who you were when you were born,” he said, “which is kind of a big deal.”

To build this model the researchers used publicly available data on COVID-19 mortality from the Center for Disease Control and US Census Bureau and studies on telomeres, many of which were published by the co-authors over the past two decades.

Assembling telomere length information about a person or specific demographic, he said, could help doctors know who was less susceptible. And then they could allocate resources, such as booster shots, according to which populations and individuals may be more susceptible to COVID-19.

“I’m a modeler and see things through mathematical equations that I am interpreting by working with biologists, but the biologists need to look at the information through the model to guide their research questions,” Anderson said, admitting that “the dream of a modeler is to be able to actually influence the great biologists into thinking like modelers. That’s more difficult.”

One caution Anderson has about this model is that it might explain too much.

“There’s a lot of data supporting every parameter of the model and there is a nice logical train of thought for how you get from the data to the model,” he said of the model’s power. “But it is so simple and so intuitively appealing that we should be suspicious of it too. As a scientist, my hope is that we begin to understand further the immune system and population responses as a part of natural selection.”

World markets are falling on Thursday; U.S. futures show below

Wall Street is looking to recover

Improve CDC’s quarantine stations to prevent the next pandemic