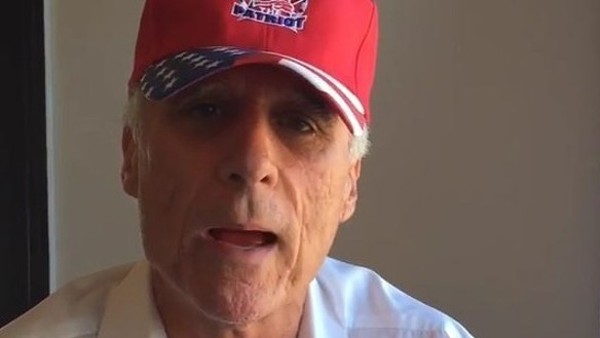 He liked to call himself the “Grim Reaper of Radio” but now the Grim Reaper has come for him.

Local radio host Bob Romanik died on Saturday at his home in Belleville, Illinois. (Is that why the sun was shining and the birds were singing all weekend?)

Romanik had jobs as a strip club owner and a metro-east police chief during his life, but he gained the most notoriety as a formulaic conservative “shock jock” who used the n-word frequently and provided a brand of programming he called W.A.R. or “White Awareness Radio.”

His predictable shtick was appreciated by listeners who were too busy burning crosses to make it to their local Klan meeting that week.

Romanik was finally taken off the air at the beginning of 2020, but not because of his raging against “greasy black n——s” and praising of “proud whites” like himself, but because he wore out a Federal Communications Commission judge’s patience.

The FCC found that Romanik was the secret owner behind a company called Entertainment Media Trust, which ran the radio station KQQZ (which hosted Romanik’s show) and three other stations.  Entertainment Media Trust was used as a shell company for Romanik, because he was a twice convicted felon and it would’ve been nearly impossible for him to get a FCC license in his name.

From a report by Riverfront Times’ Danny Wicentowski in April 2020:

“’Entertainment Media Trust’ — came under increasing scrutiny by federal regulators last summer. In June, the FCC announced that it had found ‘substantial and material questions of fact’ as to whether Romanik, a twice convicted felon, was hiding his de facto ownership of the stations.

Romanik has never hidden the fact that he has a criminal record. In 1997 he pleaded guilty to federal charges for obstruction of justice. At the time, he functioned as a corrupt police chief in Washington Park, Illinois, while operating as what federal prosecutors described as muscle for an illegal gambling operation. (He admitted gleefully to an RFT reporter in 2012 that ‘I probably lied 600 times‘ to the federal grand jury.) Two years later, Romanik again pleaded guilty to federal charges, this time for bank fraud, and served 16 months in a federal prison.”

When Romanik didn’t show up for hearings in Washington, D.C., the stations’ license renewals were denied by the FCC. Like some nightmare white pride version of Pump Up the Volume, Romanik still returned to the air for a bit after the decision, screaming his same old garbage.

Free speech being what it is, Romanik got away with saying whatever he wanted to for years. In that same spirit, we get to say whatever we want to about him. We won’t waste another minute on him, though.

Romanik was reportedly in hospice care before he croaked, which is sad news. But the good news here is that his suffering has now ended… and so has ours.

Bye bye, Bob. Say “hi” to Phyllis Schlafly and Rush Limbaugh for us.

We are Trinidad: Trinidad Fire Department