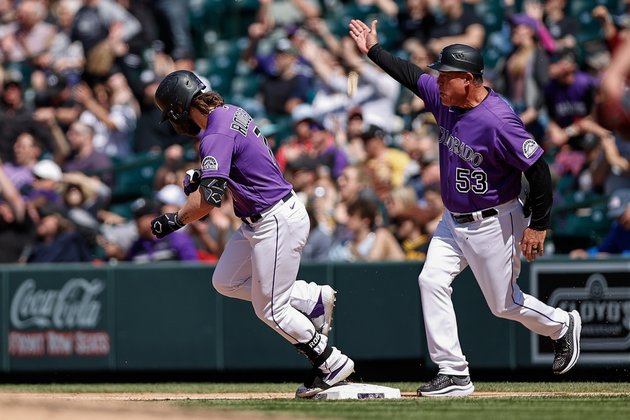 Garrett Hampson and Brendan Rodgers each blasted three-run home runs on Thursday afternoon and Randal Grichuk added a solo shot to power the host Colorado Rockies to a 9-7 win over the Washington Nationals.

Behind the three long balls, the Rockies took two of three games in the series.

The ball was carrying to all fields at Coors Field, with the teams combining for five home runs and 25 hits. The difference was that two of Colorado’s homers came with runners on base, compared to a couple of solo shots for Washington. Juan Soto, who went 2-for-3 with two walks, and Keibert Ruiz had home runs to right field.

Grichuk’s opposite-field home run in the seventh inning gave the Rockies some insurance.

Senzatela entered the game with just six strikeouts 19 2/3 innings. Sanchez came into the game having fanned five in 9 1/3 innings.

Jhoulys Chacin (3-1) picked up the win in relief and Daniel Bard collected his eight save.

Soto’s sixth solo shot of the season came in a two-run first. A throwing error at third by Ryan McMahon on Maikel Franco’s ground ball enabled a second run to score.

In a four-run second inning, Rodgers had an RBI double and Hampson crushed his three-run shot.

The Nationals closed the gap to 4-3 in the fifth inning on Josh Bell’s RBI double. But Soto, representing the tying run at third, was later picked off by catcher Dom Nunez.

After falling behind by five runs, the Nationals chipped back. Ruiz homered in the sixth, and in the seventh, Franco and Ruiz added RBI doubles.

Cesar Hernandez, who extended his hit streak to 11 games, had an RBI groundout in the eighth.