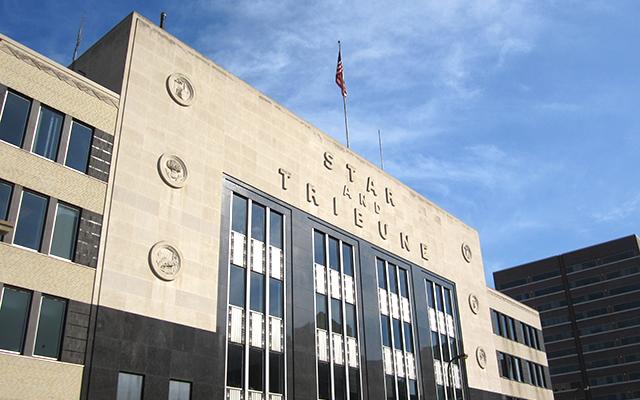 The Minnesota Department of Revenue projects the ad tax would raise $310 million of a $2.1 billion sales tax increase in 2014-15. The Strib currently charges no sales tax on ads Minnesotans buy, but would remit the proposed 5.5 percent state rate, plus 1.15 percent in local-option add-ons.

Klingensmith considers the ad tax a “revenue” tax, not a conventional sales tax on expenses. He uses this illustration of how such a single-digit tax threatens an enterprise: A business grosses $1 million and nets $100,000; the new 6.65 percent sales tax on the gross would cost $66,500, becoming a 66.5 percent earnings tax. The normally even-tempered publisher calls that “devastating.”

The Strib is no stranger to cost-cutting. The 2009 bankruptcy cost dozens of jobs and surviving newsroom workers absorbed pay cuts of up to 14 percent. Those haircuts and Klingensmith’s management stabilized newsroom staffing, and the union looked forward to its first pay raise in five-plus years.

Klingensmith says Dayton’s plan creates a climate in which it “certainly doesn’t look good to give salary increases. We spend our money on newsroom people, and ink on newsprint. We don’t have a lot of discretionary expenses” to cut.

Newspaper Guild co-chair David Chanen says the union agreed to the suspension after Klingensmith presented his case to members. The expired contract’s terms remain in force for now.

What about price hikes? Anyone who’s paid a few extra pennies for a drink knows consumers often eat a sales tax hike. Would the loyal single-copy buyer revolt at paying $1.07 instead of $1? Would the die-hard full-price subscriber cancel at $23.10 a month instead of $21.66?

Klingensmith calls such consumer-facing sales taxes “the least of our concerns, though it is a concern.” He reserves his ire for the ad tax.

Ads make up a declining slice of the Strib revenue pie, but still the biggest share. In a hyper-competitive, digital-era climate, Klingensmith believes the Strib will have to swallow the tax. “We have no pricing power. We’re pricing to marginal efficiency.”

University of Minnesota journalism professor Dan Sullivan, the Strib’s director of strategic development for 14 years, say that’s exactly what he’d say if he kept his old job. “I would be trying to build the case that we are unable to shift this tax,” he says.

But in his current role, Sullivan says: “The ability to shift depends on the availability of substitutes” and many  — TV, radio, community papers, even online-only sites like the one you’re reading — would be subject to the same new levy.

No one is suggesting the Strib — or indeed, the state’s ad industry — won’t be hit. Advertisers could, as Klingensmith predicts, keep spending flat and reduce media profitability. They could skip ad buying entirely with more in-house social networking (though they’d encounter payroll expenses if they staff up). They could buy ads from non-Minnesota media, though those sellers would have to pay sales tax if they have offices, facilities or employees here. (If not, the ad buyer must pay a “use tax,” which you’re supposed to pay on Internet purchases but don’t.)

Pressed, Klingensmith allows that the strongest local media might be able to pass on a couple of points of the sales-tax increase. Still, he notes, if that $1 million business has to eat half the sales tax, its net still goes down by a third.

One revenue source would remain untaxed: ads bought by non-Minnesota firms. Klingensmith says “that’s not a material change for us, since we only have about 8 percent national ads.”

The Strib might not lose as much as Klingensmith fears, but the state might not gain as much, either. Revenue Commissioner Myron Frans acknowledges the $310 million estimate “does not make adjustments for what negatively affects industries. … We don’t do dynamic scoring.”

Could the state phase in new sales taxes to ease transition shock? Frans says no:  Minnesota is part of a 30-state compact that requires the base rate to be applied equally to all taxable products. Localities must follow the same principle.

Of course, we might never find out what the tax will bring in. “No state in the United States of America taxes advertising,” notes Klingensmith, who says the Strib will fight the tax as part of a publisher-broadcaster-advertiser coalition.

In 1958, Maryland repealed its ad tax 14 month after adoption. Iowa repeated the dance in 1967. Arizona bailed in 1986. Florida’s ad tax collapsed in 1987, withering under a barrage of — wait for it — critical ads (plus canceled national conventions).

Of course, a year ago at this time, same-sex marriage proponents had never won at the ballot box — until four did last fall. This year, Dayton is not alone in proposing an ad tax.

In Ohio, Republican Gov. John Kasich has proposed an ad tax, also as a rate reducer but not a revenue raiser. James Davidson, executive director of the D.C.-based Advertising Coalition, said he’s heard “rumblings” from a former repeal state, Arizona.

Despite his skeptical eye, Sullivan agrees with Klingensmith and MinnPost economist Louis Johnston that a sales tax on a business input (like a Target ad to sell a product), on top of the product’s end-user sales tax, represents inefficient tax policy. He says such cascading or pyramiding taxation is unfair, opaque and more complicated to collect than a simple end-user sales tax. For his part, Johnston has played with scenarios eliminating some services from the tax and paying for it with a smaller rate cut.

Frans says his department decided to “start big” in defining taxable services because excluding whole segments “carte blanche … would take a lot of revenue off the table.” It wouldn’t be the first time a politician asked for something big in hopes of getting something at all, and even if Capitol swells predict the business-to-business tax will be the first to go, some aspects — say, a previously unheard-of tax on newspaper purchases — may survive.

For now, Frans says that the department is listening to feedback about which business-to-business aspects merit exclusion: “Some [industries] have a more compelling argument than others.”

Fewer than half of Minnesota students are proficient in math