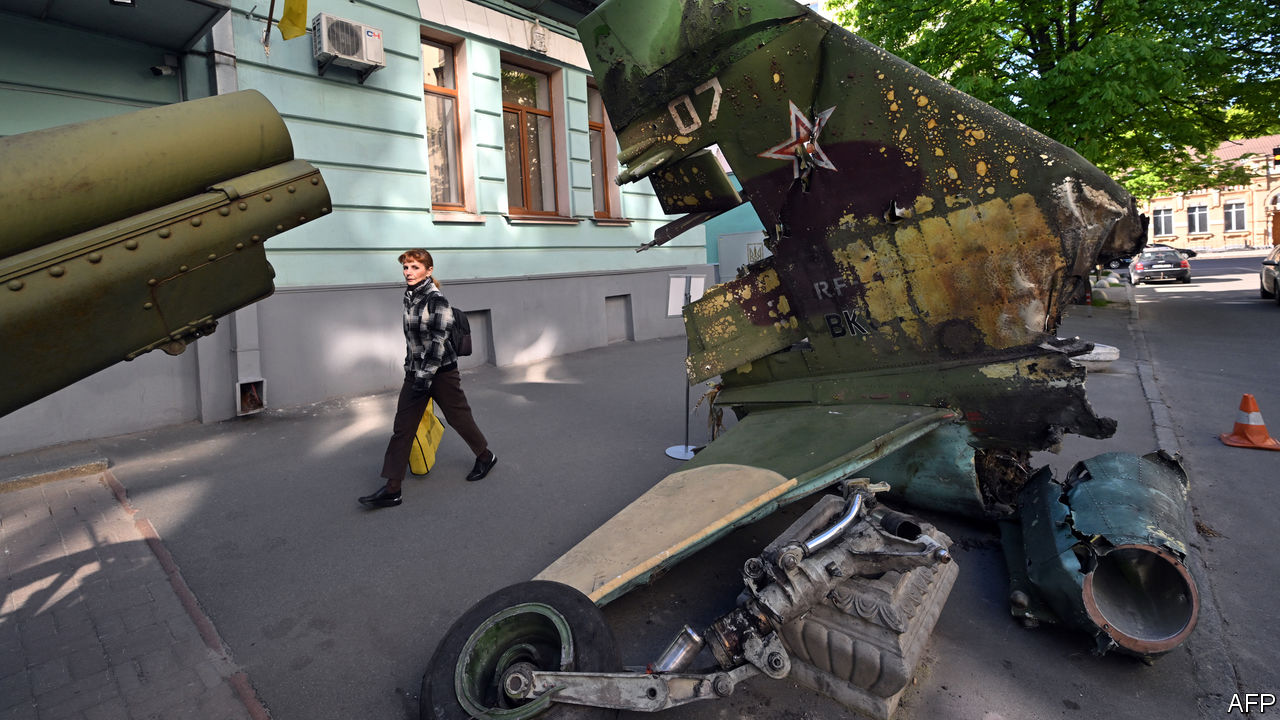 Фor last week, brilliant Russian tanks roared along Tverskaya Street, the main attraction of Moscow. Thousands of soldiers marched on Red Square under Soviet flags as fighters roared over the city. Everyone was preparing for the annual Russian parade on May 9 holy his victory in World War II. Vladimir Putin is there displayed his barbaric war against Ukraine as a continuation of the Soviet war against Nazi Germany.

The Victory Parade was hailed as a turning point in the war, a military showcase that Putin could use to replace success on the battlefield – or, conversely, as a moment to declare that he is mobilizing the country’s reservists to redouble military efforts. However, he did not make any serious statements.

But while the world waited for Putin to say, Vladimir Zelensky, Ukraine’s president, managed to get ahead of him. Mr. Zelensky, a former actor and perfect communicator, organized a political demonstration of resistance and solidarity during the day. The Prime Minister of Canada Justin Trudeau arrived in Kyiv, where he took part in an online meeting of the G7 with Mr. Zelensky as a guest of honor. The group issued a statement declaring its determination that “President Putin should not win the war against Ukraine,” saying they owe “the memory of all those who fought for freedom in World War II.”

The chairman of the German parliament Berbel Bass also arrived in Kyiv. Bono and the Edge of U2 performed with Ukrainian musicians at a metro station used as a bomb shelter. Jill Biden, the wife of Joe Biden, President of the United States, unexpectedly appeared in Western Ukraine with Elena Zelensky, the wife of Mr. Zelensky.

As for Mr. Zelensky, he published one of his branded videos, this time in black and white in front of a building destroyed by Russian missiles. The day before, Russian troops bombed a school in the east of the country, killing 60 of the more than 90 people who took refuge there. “Darkness has returned to Ukraine, and it has become black and white again,” said Mr. Zelensky in a T-shirt with the words “I am Ukrainian.” “Evil has returned in a different form, under different slogans, but with the same purpose.”

Russia’s war itself was planned as a parade, a lightning march on Kyiv, which was to end in 72 hours. But 74 days later it was a sign of military failure. Nothing went according to plan. The map captured by the Russian military by Ukrainian forces shows a red line along which Russian tanks were to go to the capital. But the 28-page map dates back to 1987, says the head of the National Security Council of Ukraine Alexei Danilov. The intersection he showed is long gone. The Russians made a wrong turn and ended up stuck in Bucha, a suburb of the middle class, where they committed many war crimes.

When Russian leaders thought that such violence would break the resolve of Ukrainians, they were wrong. Russian-speaking cities in eastern Ukraine have become bastions of resistance. In Mariupol, a port city that equaled Russia (and where Russian propagandists failed to hold a planned Victory Day parade on May 9), Ukrainian fighters from a semi-independent unit called the Azov Battalion continue to be held in tunnels under the giant Azovstal steel. plant. On May 8, using Ilona Maska’s Starlink satellite Internet system, they managed to hold a press conference via Zoom from their bunkers, even as Russian forces bombarded the plant. “We have shown what is impossible, and the impossible has become a routine for us,” – said one of the fighters of “Azov” Ilya Samoilenko. “Our message: don’t waste our efforts.”

For all its mistakes, Russia has gained control of the overland corridor connecting Crimea, a peninsula it seized in Ukraine in 2014, with its own territory. If before the war it occupied about a third of the Donbass, in eastern Ukraine now controls about 80%. But his offensive to capture the rest is advancing rapidly. The fiercest fighting took place around the city of Izyum, the northern edge of the Pincer, which Russia hopes to close around the Ukrainian ledge. But Ukrainian forces are dug in trenches and bunkers, which reduces the impact of increasing Russian artillery shelling and complicates the advance of the invaders.

Meanwhile, Ukraine is conducting a counter-offensive northeast of Kharkiv, Ukraine’s second-largest city, pushing Russian troops to the border. To slow down Ukraine’s advance, Russia blew up three bridges. “Armies usually destroy bridges only if they have largely decided not to try to cross the river in the other direction any time soon,” said the Institute for War Studies, a U.S. think tank.

Russia has also managed to occupy or block Ukraine’s seaports. Before the war, 90% of Ukrainian steel and grain were exported by ship. Ukraine is trying to find alternatives. It is not easy for Russians to keep such cities. In Kherson, an occupied port city, Russia announced on May 6 that residents could apply for Russian passports. Few accepted the offer; The Ukrainian prosecutor’s office has opened cases against those who have. Despite intimidation, arrests and beatings, anti-occupation demonstrations continue.

Given Mr Putin’s full control of the Russian media, it may be enough for him to declare victory while continuing to exhaust Ukraine in a war of attrition. Whether this will work depends on Ukraine’s ability to counterattack. Russia has more artillery, but has problems with troops and motivation. Ukraine has enough motivation and troops, but currently lacks the firepower to launch large counterattacks along several fronts, Ukrainian officials say.

Ukraine’s defensive, fortified position in the Donbas, the limited network of roads in the area and the dirty soil of recent weeks have made it difficult for either side to move and concentrate its forces for rapid, large-scale offensives. But a Western official says America and European countries are supplying Ukraine with increasing amounts of heavy weapons – including artillery and tanks – at least in part to encourage such efforts.

Medium-range and long-range artillery systems, which Ukraine desperately needs, have been promised, but they have emerged slowly, says Andrei Ermak, Zelensky’s chief of staff. “Time matters. We want to save our heroes, not celebrate them posthumously, ”he says.

Ukraine’s counterattacks will have limits. Her army is unlikely to undo all of Russia’s territorial conquests since February 24, which Mr Zelensky cited on May 6 as a precondition for talks. But there is every chance that Ukraine could bloodily stop Russian forces, as was the case north of Kiev in February and March. Now, Mr Putin is unlikely to be able to seize the entire Donbass, let alone restore Russia’s control over what it calls Novorossia, a region that stretches along the Black and Azov Seas. This is a clear strategic defeat.

The IAEA Board of Governors Resolution on Iran

Dell Technologies (DELL) will publish earnings in the first quarter: what’s in store?

Gisele Bundchen hangs with her daughter, visits the doctor during the loss of Tom...