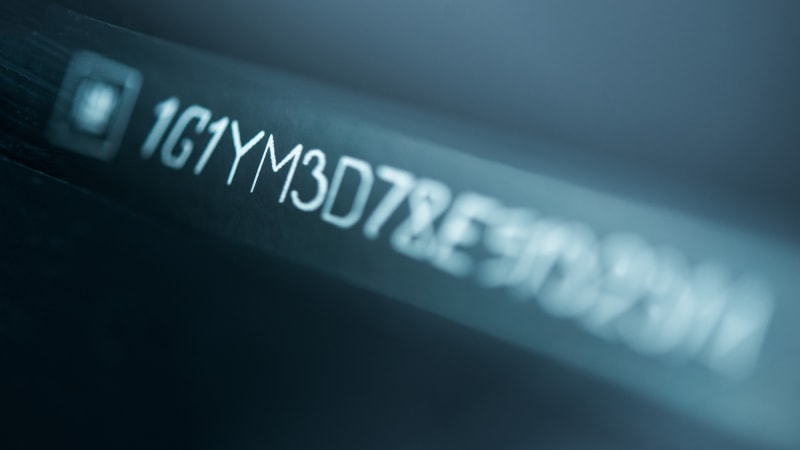 A VIN or Vehicle Identification Number is like a social security number, serial number or UPC code for a car. It’s given to a car by its manufacturer and no two VINs are the same. The VIN is a unique string of 17 characters that identify a variety of characteristics about a car including:

VINs can also tell you things like what kind of airbags are present in the car, what kind of restraint system it has (think seatbelts) and the year of the vehicle. Basically, the VIN offers a quick way to decode the details of a car.

These numbers have been required on vehicles since 1954, but were standardized starting in 1981 when the National Highway Transportation Safety Administration (NHTSA) began requiring that all vehicles have a VIN that followed the specific 17-character pattern we see today.

What does the VIN mean?

The VIN has a set pattern that tells you a whole bunch of things about the car you are looking at.

The first three numbers make up what is called the world manufacturer identifier or WMI.

The next six numbers help identify the vehicle further:

The last seven numbers are the car’s serial number.

This unique VIN is then associated with a database of information about the history of ownership, accidents, and title information of a car and can tell you a ton of things about what kind of events the car has been through.

Where is the VIN on your car?

The VIN is usually found in a variety of places around the vehicle. These include:

You can also find a VIN on any ownership paperwork like the title, registration and insurance paperwork.

Read more: What is a vehicle title or pink slip?

How to Decode a VIN

Decoding a VIN is relatively easy in today’s modern world. Do a quick search for a VIN decoder online and you’ll find a variety of options. Plug in the VIN you want to know more about and you will get a variety of information including everything from the location of airbags to the type of fuel it is designed to run on.

It’s best to use VIN decoders as a jumping-off point to find out about a car, as well as its ownership and accident history. VIN decoders and vehicle history reports should be combined with an inspection from a certified mechanic to ensure that you are getting a good used car. Never rely on the vehicle history report alone to determine whether or not you should purchase a specific used car. There can be errors and omissions that could cause problems. Read on below to find out more.

Using the VIN to pull a Vehicle History Report

You should consider pulling a vehicle history report before purchasing any used car. Usually, those come at a cost and range anywhere from $40 for one report to $100 for multiple. The most well-known reports come from CarFax but they are also the most expensive. Other companies like AutoCheck (owned by Experian) also offer vehicle history reports based on a vehicle’s VIN.

Read more: 7 questions you should ask before buying a car

You should also consider running the VIN through the National Motor Vehicle Title Information System. This system is run by the Federal Department of Justice. All salvage yards, insurance providers, junkyards and auto recyclers are required by law to report to this body on a regular basis. For $10 you can get a basic report that shows if the car has any branded titles on it (junk, salvage, flood, etc.). A branded title is issued when a car has been in a major accident or been the subject of some other major damage.

It’s important to understand what a VIN does and what it can tell you so that you can make an informed decision when you’re shopping for a car. You may find it’s best to start with the National Motor Vehicle Title Information System and work from there to find out as much about the vehicle as possible before putting down your hard-earned cash.

This recession indicator has just lit up – what does that mean?