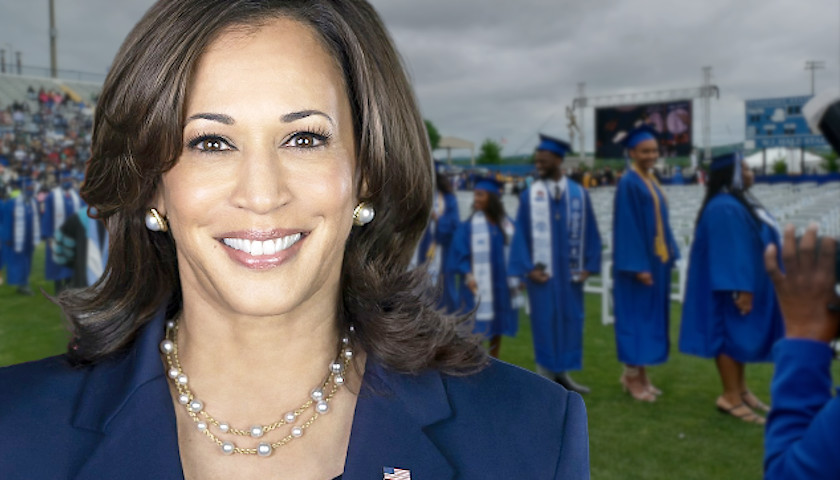 In her Saturday morning speech to the TSU 2022 undergraduate class, Vice President Harris said, “In the United States, we are once again forced to defend fundamental principles that we hoped are long settled. Principles like the freedom to vote, the rights of women to make decisions about their own bodies.”

The Tennessee Star, as directed by Harris’ onsite press team, emailed Kirsten Allen and Ernesto Apreza, the press secretary and deputy press secretary from the office of the vice president, with requests for comment.

Members of the White House and vice presidential press teams, including Apreza, had previously been very communicative with The Star and other outlets regarding Harris’ appearance at the TSU graduation ceremony.

The Star requested answers to the following questions in light of the VP’s comments:

1 – Is the White House, along with Vice President Harris, latching onto abortion as a wedge issue in order to rile up the Democrat base for the November midterm elections and avoid addressing/fixing the economic, foreign, and domestic (ie. inflation, border, and crime crises) policy disasters that they’ve created?

2 – Will Vice President Harris condemn the unprecedented leaking of the Supreme Court decision on abortion and the calls for harassment of six Supreme Court justices?

3 – Does Vice President Harris value and respect the U.S. Supreme Court as an institution, part of a co-equal branch of government, and by extension the individual justices who serve as part of that institution?

The vice president’s press team did not respond to those questions as of press time.

The initial indications are that the leak has galvanized Democrat and pro-abortion donors; however, it will not translate to votes, according to a prominent national Republican political consultant who has both U.S. House and U.S. Senate clients this election cycle.

“The SCOTUS leak will help the Democrats raise a lot of money in the short term, but it won’t translate to votes in November,” the consultant told The Star. “The Democrats are the party of abortion. They already had the pro-abortion vote and they’ve had it for decades.”

“Their base will probably even calm down on the issue when they eventually realize in the coming months that the leaked draft of the decision, contrary to the Democrat message, does not ban abortion at the federal level. It lets the states decide on that issue,” he added.

ActBlue, a Democrat fundraising platform, tweeted on Friday that pro-abortion groups and candidates have received $27.5 million in donations since the SCOTUS draft opinion leaked.

“Donors and organizers are showing that they are ready to fight to protect reproductive rights,” the group said.

Update: groups and candidates raised $27.5 million on ActBlue from the time of the SCOTUS leak through Thursday. Donors and organizers are showing that they are ready to fight to protect reproductive rights. https://t.co/fyBqIKSF4a

Business Insider published an article on Tuesday titled, “Democrats are using the SCOTUS leak to fundraise like crazy for the 2022 midterms.”

The Star previously reported that Chief Justice John Roberts called for an investigation into the source of the leak.

“To the extent this betrayal of confidence of the Court was intended to undermine the integrity of our operations, it will not succeed,” he said. “The work of the Court will not be affected in any way.”

“We at the Court are blessed to have a workforce – permanent employees and law clerks alike – intensely loyal to the institution and dedicated to the rule of law. Court employees have an exemplary and important tradition of respecting the confidentiality of the judicial process and upholding the trust of the Court,” continued the Chief Justice. “This was a singular and egregious breach of that trust that is an affront to the Court and the community of public servants who work here.”

“I have directed the Marshal of the Court to launch an investigation into the source of the leak,” Roberts added.

“They need to figure out who did that and they need to hold them accountable because that’s a real significant breach of trust,” he said. “You want to talk about an insurrection, that’s a judicial insurrection, to be taking that out and trying to kneecap a potential majority through kind of extra-constitutional means.”

Pro-abortion groups are planning protests at the homes of the six Republican-appointed U.S. Supreme Court justices.

Aaron Gulbransen is a reporter at The Tennessee Star and The Star News Network. Email tips to [email protected] Follow Aaron on GETTR, Twitter, and Parler.

Ride the recovery with this 4.7%+ Momentum All-Star