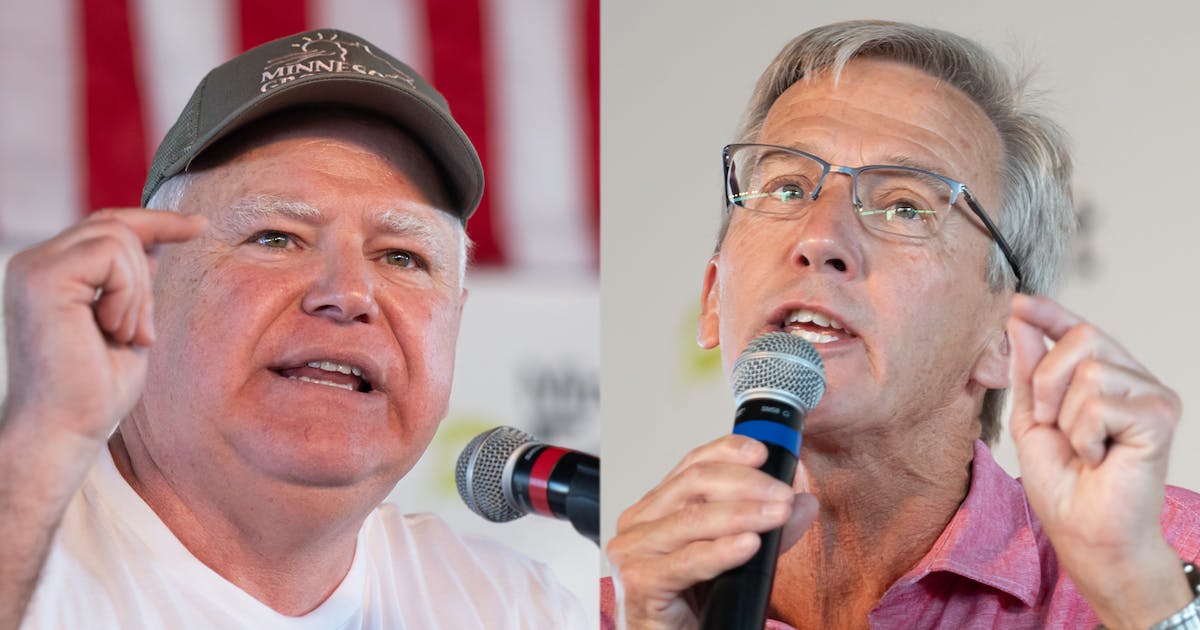 The latest Star Tribune/MPR News/KARE 11 Minnesota Poll released this week asked likely voters about this year’s elections for governor, attorney general and secretary of state. The survey also questioned Minnesotans on abortion, the legalization of marijuana, sports betting, crime and inflation. Let’s dive into some of the poll’s findings.

First, a review: interviews were conducted Sept. 12-14 with 800 likely Minnesota voters — that is, registered voters who indicated they are likely to vote in the November general election. The poll had a margin of sampling error of plus or minus 3.5 percentage points. Margins of error for any subgroups within the sample will be higher, and previous Minnesota Polls conducted at different times with different samples will naturally vary. More information about the latest poll’s methodology, a demographic breakdown of the respondents and a map of the poll regions can be found on the results pages.

Women and nonwhite voters are keeping the DFL afloat

The new poll found DFL Gov. Tim Walz holds a comfortable but not overwhelming 7-percentage point lead over his Republican opponent, former state Sen. Scott Jensen. But with 10% of voters undecided, this race could potentially swing in either direction.

Perhaps the new survey’s most striking finding was the polarization by gender. Walz enjoys a 20-percentage point lead among women but is trailing by eight percentage points with men. This gender gap also showed up in the other statewide races. DFL Attorney General Keith Ellison is deadlocked with GOP challenger Jim Schultz, though Ellison leads by 17 points with women, while trailing by 16 points among men. In the secretary of state contest, the survey showed DFL incumbent Steve Simon leading by 8 points overall and by 20 points with women, but trails GOP candidate Kim Crockett by 7 points with men.

The race gap for DFL candidates was even starker, the poll found. All three DFL candidates enjoyed nearly 50-point leads with nonwhite voters. Meanwhile, Walz and Simon were essentially even with their opponents among white voters and Ellison saw a 5-point deficit.

The urbanization of the DFL continues

This divide also shows up in Walz’s job approval rating, with nearly three in four Hennepin/Ramsey voters saying they approve of his performance as governor, but only four in 10 approve in the rest of the state. That’s consistent with the last Minnesota Poll in September 2021.

As several readers pointed out on social media, these regions are not perfect, and any attempt to carve up the state will have drawbacks. The regions used in this poll were designed so that Hennepin/Ramsey counties and the rest of the metro will have roughly comparable populations (and similar margins of error), and northern and southern Minnesota would also approximate each other. Undoubtedly, these large regions hide pockets of DFL support in other urban areas around the state, but the broader trend of DFL strength receding from historic strongholds in Greater Minnesota (the Iron Range, for example) into the Twin Cities metro shows no signs of reversing.

Abortion appears to be motivating Democrats

In the wake of the U.S. Supreme Court’s decision overturning Roe v. Wade and removing federal protections for abortion access, more than eight in 10 self-identified DFL voters said they oppose the ruling. When asked to name the most influential policy area in deciding their vote for governor, just over a third of both DFL voters and Walz supporters (obviously there is a lot of overlap between those groups) chose abortion, compared with about one in 10 of both Republicans and Jensen supporters and one in five independents.

Among Republicans, 41% said the economy/jobs was the most influential issue, as did 39% of independents. The economy was also the top issue for 42% of Jensen voters.

When asked if crime has increased or decreased in their community over the past few years, nearly two-thirds of GOP voters said it increased, compared with just over half of independents and a little less than half of DFL voters. “Law and order/crime” also ranked as the second most influential issue for Republicans and independents in determining their votes for governor, with 38% and 24% respectively choosing that option, as opposed to 10% of DFL voters.

Still, the vast majority of respondents across all demographics said they have not feared being threatened or attacked in their neighborhoods over the past year.

Most Minnesotans confident votes will be counted accurately in 2022

Republicans and Trump voters were the biggest outliers on this question, with only 2 in 10 respondents in both groups saying they had high confidence ballots would be counted accurately. But nearly two-thirds of each demographic answered that they had either high or moderate confidence in the vote count, with 3 in 10 saying they had “not much” confidence.

Meanwhile, 100% of DFL voters and more than 8 in 10 independents said they had high or moderate confidence in the vote tally.

Hemp-derived THC edibles became legal in the state in July, raising the question of whether that would boost support for full legalization of marijuana. But that doesn’t appear to be the case — and support actually fell in some key demographics, the new poll found.

In February 2020, the poll found 51% of Minnesota voters backed legalizing marijuana for recreational use, while 37% opposed it. In September 2022, a similar 53% of voters said they support legalizing weed and 36% oppose it.

Those relatively flat topline numbers mask significant increases in support for legalization among certain demographics — including Democrats, independents and voters over age 50. However, those gains were largely offset by falling support among men, Republicans and, curiously, the youngest voters. The February 2020 poll found 3 out of 4 voters age 18 to 34 supported legalization, but just 60% said they favor legal pot in the recent poll.

Correction:
An earlier version of this story misstated Gov. Tim Walz’s support in the governor’s race in southern and northern Minnesota.

Can states prosecute women who cross state borders for an abortion?

The 22-year-old slugger broke the home run record for players of...