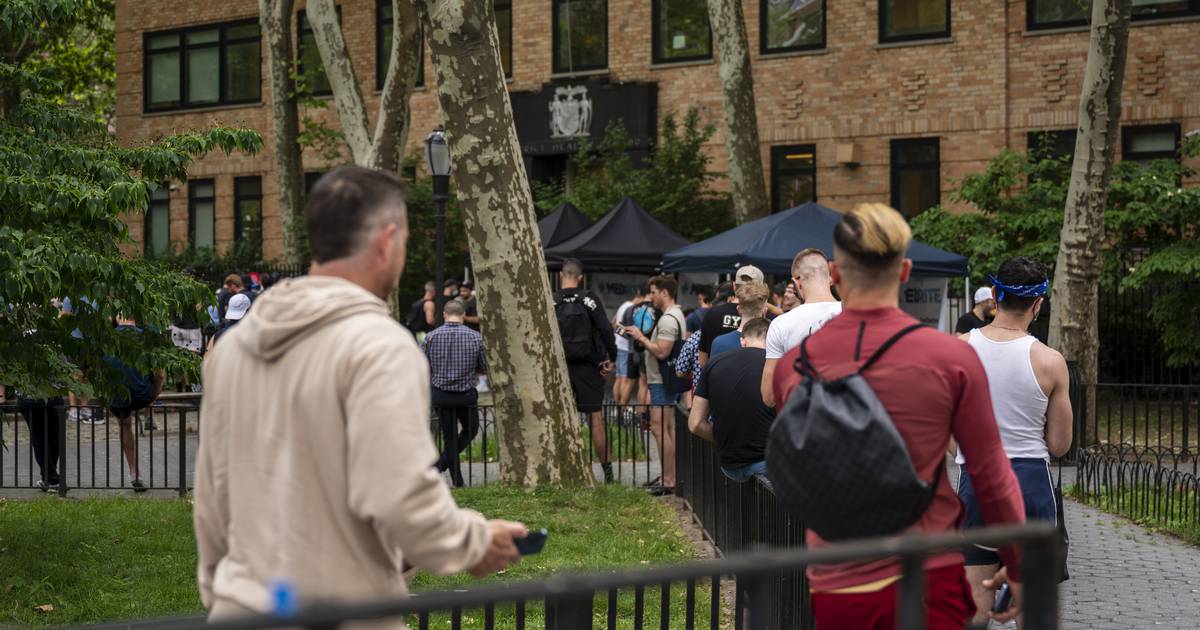 As his trip to Europe in mid-June was winding down, Justin, a 48-year-old Baltimore man, developed a fever and sore throat. His lymph nodes swelled.

“When I started seeing dots on my body I thought, oh, boy, this isn’t anything I’ve experienced before,” he said.

“A friend of mine is a physician assistant at a clinic in New York City and he posted on Instagram about seeing cases of monkeypox, and they were disproportionately affecting gay men,” he said. “I started putting two and two together.”

Justin, whose last name The Baltimore Sun is withholding for his privacy, and one of his two partners are among what are now 14 cases of monkeypox in Maryland and about 700 across the nation recorded by the U.S. Centers for Disease Control and Prevention since the outbreak began in Europe in May.

The rising cases are concerning public health officials and experts, who believe there are more infections going unreported and are working to communicate the threat to at-risk communities without creating stigma or sowing alarm — or overly reassuring — the general public. They also are scrambling to distribute tests and vaccines.

Justin said they need to hurry.

“Have we learned nothing from COVID?” he said. “We need to get in front of this, err on the side of acting fast with accurate information. What people fear is the unknown.”

Justin uses his own example. He pays attention to the news yet learned about monkeypox from Instagram. When he went to a local hospital emergency room, they treated him well, running tests to rule out sexually transmitted diseases and other conditions but had no monkeypox tests.

Someone from the Baltimore health department located and drove a test kit to a nearby health center, but the positive result had to be confirmed by the CDC. Ultimately, it took about nine days to confirm his case. And, there was no vaccine for his exposed partner.

He began a four-week quarantine, struggling to eat, drink and sleep because of pain from his swollen lymph nodes. His normally healthy body is now recovering and he’s able to work remotely, though his lesions are unhealed enough to keep him from leaving home or embracing his partner.

Public health officials at the local, state and federal levels are moving to expand access to information, tests and vaccines — and there has been some progress.

Chase Cook, a spokesman for the Maryland Department of Health, said officials are using contact tracers to identify those exposed to monkeypox and offering “the opportunity to receive a vaccination through the appropriate provider.”

Those exposed and not offered a dose can contact their health care provider, Cook said, though he wouldn’t say whether Maryland has received doses or how many. He also said the state did not know how many doses it would receive eventually, but officials would work with “key partners in the state to deploy them.”

State health officials continue to plan, he said, and are examining steps taken in other states, and they are using social media and other means to communicate with the public and providers.

One activist in Baltimore credited state health officials with alerting the community about the outbreak and seeking advice on the letter sent to providers in May, when the first case was reported.

“The state health department has been helpful in that they have obtained input from the community about how to get the word out without further stigmatizing people, making people punching bags even more than they are now,” said Lynda Dee, founder of AIDS Action Baltimore.

Federal health officials said in a news briefing last week that it was using a tiered allocation system for hundreds of thousands of vaccine doses that prioritizes places with the most cases, which includes California, Florida, New York and Washington, D.C.

They expect to deploy 1.6 million doses of Bavarian Nordic’s Jynneos vaccine before the end of the year that can be used before or after exposure. Some are already in the national stockpile, but most are not yet packaged or produced.

An older smallpox vaccine in the stockpile made by Sanofi Pastuer Biologics Co. called ACAM200 also protects against monkeypox but likely will only be used in limited cases because it can trigger heart problems and other issues.

Federal health officials have sent about 9,000 vaccine doses and 300 courses of antiviral medications to treat and prevent severe monkeypox cases after exposure to 32 jurisdictions as of last week.

“While monkeypox poses minimal risk to most Americans, we are doing everything we can to offer vaccines to those at high-risk of contracting the virus,” U.S. Health and Human Services Secretary Xavier Becerra said in a statement. “This new strategy allows us to maximize the supply of currently available vaccines and reach those who are most vulnerable to the current outbreak.”

That includes anyone with a confirmed or presumed monkeypox exposure and gay or bisexual men with multiple sex partners in a venue or area linked to monkeypox cases.

The CDC specifically said Wednesday that the major chain Labcorp soon will be able to perform up to 10,000 tests per week, doubling current capacity. The public will not be able to walk into a Labcorp facility, rather health care providers will order Labcorp tests.

“This will not only increase testing capacity but will make it more convenient for providers and patients to access tests by using existing provider-to-lab relationships,” CDC Director Dr. Rochelle Walensky said in a statement.

The CDC says anyone with a rash that looks like monkeypox should talk to their medical provider about being tested, even if they don’t know if they were exposed.

Keri Althoff, epidemiologist at the Johns Hopkins Bloomberg School of Public Health, said scientists still are learning about this outbreak, as the virus is behaving differently than in years past in Africa where it’s endemic and humans normally catch it from animals.

In Europe and the United States, the cases are spreading more rapidly and from human to human. Monkeypox isn’t as contagious as COVID-19 because it requires close contact, though people can become infected through contact with bodily fluids or the rash.

Eventually, there will be more cases outside of the LGBTQ community, Althoff said. For example, someone changing bed linens, such as a housekeeper, could become infected.

And while most cases have been mild, though painful and uncomfortable as symptoms resolve over two to four weeks, she said people with underlying health conditions are at greater risk for severe illness and death.

For now, she said the focus needs to be on the community most at-risk.

“We follow the public health principles that are rooted in health and human rights and say meet people where they are and serve the population bearing the biggest burden of disease at any time,” Althoff said.

She said resources are needed quickly, and the Jynneos vaccine needs to be given within a few days of exposure, though she acknowledged the limited supply.

“I think there is a hustle right now to get more tests and more vaccines to communities,” Althoff said.

Ruhs said staff is prepared and public awareness seems to be building. More people are asking about monkeypox during visits, and officials are working on updates on their website and social media and through direct messages. Tests are available.

He said the response is swifter than the one for COVID-19, not months for a test and a year for a vaccine. Already, Chase Brexton has had one person tested at the state lab in Baltimore, a one-day process.

“We’ve learned from the pandemic in the last couple of years how dangerous holdups are,” he said. “We need to be connecting with the right people now.”

That means reaching out through trusted networks to reach people who already may feel marginalized, including gay or bisexual men, transgender women and sex workers.

“We need to speak openly,” he said, “do outreach, get connected to these communities.”