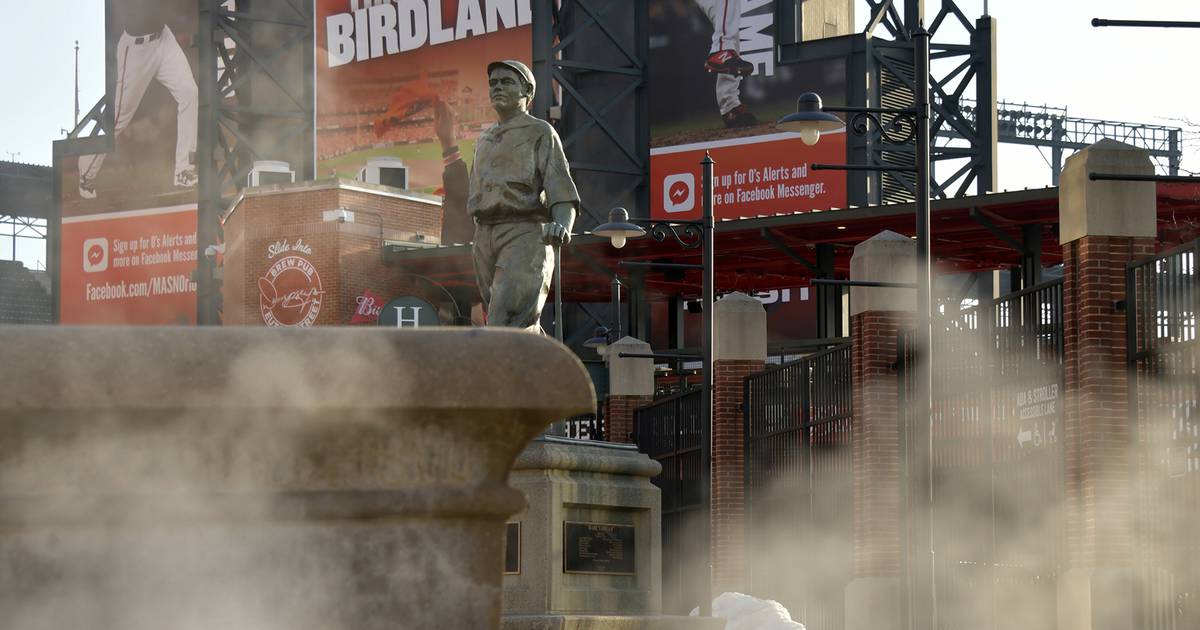 There is no evidence at Oriole Park at Camden Yards that people were sold at the site. In 1858, Joseph S. Donovan, one of Baltimore’s major slave dealers, built a slave pen near the southwest corner of Eutaw and Camden streets. It was one of about a dozen private slave jails downtown, according to a 1936 Sun article, that held enslaved people, suspected runaways and kidnapped free Black people. Many, ultimately, were forced onto ships for final passage to the Deep South.

The United States banned the importation of enslaved African people in 1808, but domestic sales of human beings grew after the War of 1812. Baltimore, a major port and shipbuilding center, was a pioneer in the coastal trade of human chattel. As Maryland farmers transitioned from labor-intensive tobacco to wheat, corn, oats and other grains, they realized their surplus workers were a valuable commodity. At the same time, cotton, sugar cane and rice plantations expanded in the lower South. Traders operated near Baltimore’s harbor, dispatching their human cargo to large markets in places such as New Orleans.

Seeing what is no longer there is a daunting task. Footprints once left on the dirt streets by coffles — mournful processions of enslaved men in chains, followed by women and children — are gone. Only a ghostly footprint remains etched in the ground we traverse today.


Note: Location information in the titles on the pop-up windows corresponds with present-day street numbering and built environment. Because of changes to each, this location information may have been different during the period being referenced.

The trade was integral to the thriving economy of the antebellum South. “Cash for Negroes!” proclaimed ads in newspapers, including The Sun. The average price for an enslaved person during the antebellum period was approximately $400, according to “Historical Statistics of the United States.” The equivalent in today’s dollars is roughly $14,500, although Williams cautions against viewing enslaved people as slave traders did: “Human beings should never have had prices in the first place.”

Austin Woolfolk, the first large-scale coastal slave trader in the Chesapeake region, purchased a white frame house in 1821 on the north side of Pratt Street, just west of today’s Martin Luther King Jr. Boulevard. An account published in Genius of Universal Emancipation, an abolitionist newspaper, described, “The small grated windows of his prison in the rear — the chains, fetters, and miserable objects of suffering there concealed, chilled the blood with horror.” By building the first private slave jail in the city, Woolfolk created the business model of warehousing human property before shipment.

Woolfolk made at least 71 human shipments between 1818 to 1846, delivering more than 2,600 enslaved people to New Orleans, according to available manifests analyzed by historian Ralph Clayton in his 2002 book, “Cash for Blood: The Baltimore to New Orleans Domestic Slave Trade.” In 1843, Joseph Donovan bought Woolfolk’s pen and operated there before building new slave pens on Camden Street near Light Street, roughly where the Hyatt Regency stands today, and later at Camden and Eutaw streets. The site of Woolfolk’s slave jail is now a small park with several homeless tent encampments.

Another slave dealer, Hope Hull Slatter, boasted in Sun advertisements about his “light and airy” slave jail when it opened in 1838 on the north side of West Pratt Street, just east of Howard Street. Other traders could board their enslaved people in his “establishment” for 25 cents a day. In the rear of the high-walled prison, a bloodhound chained near an iron gate helped deter escapes, according to accounts in “Cash for Blood.” Before selling his jail to Bernard Moore Campbell in 1848, Slatter sold more than 2,500 enslaved people. The Pratt Street slave pen was liberated by Union troops in 1863. A blacksmith released the ankle shackles that connected pairs of men.

Other successful local traders included John N. Denning and James Franklin Purvis. Denning operated a pen from 104 N. Exeter St., behind what is today the main U.S. Post Office on Fayette Street in Jonestown, and at 18 S. Frederick St., just north of the present-day Holocaust Memorial. Purvis’ slave jail, behind his residence at 1225 Harford Ave. in what’s now the Oliver neighborhood, was farther afield. Like the other private slave jail sites in Baltimore, no trace remains of Purvis’ house and pen. Purvis is an example of a slave dealer who used his profits to transition to a respectable business, becoming the president of Howard Bank of Baltimore in the mid-1850s. It’s not connected to the Howard Bank founded in Ellicott City in 2004.

The biggest coastal traders in Baltimore — Woolfolk, Slatter, Donovan and Campbell — together owned seven of every 10 enslaved people transported from Baltimore to New Orleans, according to Williams. They were not above kidnapping free Black people, who by 1830 made up four-fifths of Baltimore’s Black population. Traders also frequented the city jail, on the lookout for unclaimed captured runaways or free Black people who had been arrested.

The business underpinned every aspect of Baltimore’s economy and society, yet the history of the local slave trade was largely erased. The wealth accumulated by Donovan, who sold more than 2,200 enslaved people, funded the philanthropy of his widow, Caroline Donovan. She donated $100,000 — more than $3 million in today’s dollars — to Johns Hopkins University in 1885. The first endowed chair at the university is the Caroline Donovan Professorship in English Literature. An imposing mausoleum for the Donovans sits on a hill in Green Mount Cemetery.

While few physical signs of the slave trade remain where it was carried out, there is one official state historical marker, placed by the Maryland Historical Trust outside the Reginald F. Lewis Museum in 2009.

A $20,000 grant from the Baltimore National Heritage Area, managed by the nonprofit Baltimore Heritage Area Association Inc., is funding the development of a mobile app and touch-screen kiosk at Historic President Street Station that will include slave trade sites. Robert Reyes, vice president of the nonprofit Friends of President Street Station, hopes this tour highlighting abolition and Underground Railroad sites and opening in midsummer, will be “a bridge builder for relationships today.”

At Camden Yards, Maryland Stadium Authority Executive Director Michael Frenz said the authority has not been approached about adding a historical sign.

“It is horrifying to learn that chapters of the dark part of our nation’s history took place on the complex, a place you associate with more lighthearted types of entertainment. There are several historic plaques in and around the complex,” Frenz said. “Marking the history of the complex before the stadium was here is certainly something that we are in favor of. We’d probably consult with the Orioles, because they are our partners.”

The baseball team’s senior vice president for community development and communications, Jennifer Grondahl, concurred, saying that the O’s look forward to “leading the conversation” with the “hope that this and other historical themes will be incorporated into the design and development of the future improvements.”

Another destination known more for entertainment than history lessons is Harborplace, which was acquired in April by Baltimore-based MCB Real Estate. Managing Partner P. David Bramble expressed surprise that Baltimore was one of the most significant ports for the slave trade.

Bramble, who is Black, said that it was too early to say how this could be addressed at Harborplace.

“Our goal is to put in something that is authentically Baltimore, and I don’t think you can be authentic without pulling in history. We are very intent on having a significant engagement process with the community and stakeholders to see how they want to see the history represented in the redevelopment.” Bramble added, “You have to understand what was behind you, but equally important is what we do going forward. I’m an optimist. How do we look toward the future?”

Philip J. Merrill, a Baltimore historian and CEO and founder of Nanny Jack & Co., an African American heritage consulting firm, said the city’s slave trading past is “a touchy subject,” but one that could inform the future. With few visible, official guideposts to the slave trade, he said, some of this history has been taught informally, with stories passed down through the generations.

If “we could look at our enslavement from a different lens … we could be filled with perseverance and a sense of pride. Slavery, which is in our ancestors’ DNA, is something that should give us strength, determination and the ability to know we can survive anything.”

Lincoln Tap will let you pour your own beer in Royal...