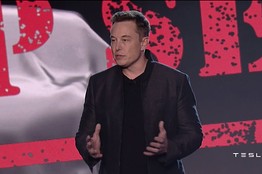 Elon Musk took the stage in front of a packed house in Los Angeles on Thursday night to lift the curtain on the hotly-anticipated Model 3, the more-affordable successor to Tesla’s high-end electric lineup that could very well determine the fate of the company.

Neither Musk, nor the car, disappointed.

Of course, the Tesla chief executive could roll out version 2.0 of Fred Flintstone’s foot-powered sedan, and it would be hailed as a watershed moment in automotive history, a tour-de-force in the green revolution. Fans would swoon, waiting lists would grow and the mad genius would smile and shrug it off as inevitable.

To be fair, though, Musk’s magic touch has been called into question with increasing frequency lately. Tesla
TSLA,

shares have lost almost 20% from their 52-week high, amid concerns about production delays and the cheaper gas prices that could hurt demand for electric cars.

Add to that the ailing stock price of SolarCity
SCTY,
,
Musk’s other public company, and at one point last month, he saw nearly half his net worth disappear. Billions … poof!

But none of that mattered Thursday, when Musk ascended to the pulpit to unveil to his minions what the company describes as “the vehicle that Tesla set out to build at our inception.” Lines had already been forming at Tesla shops around the world all day as fans waited for the opportunity to plunk down $1,000 to reserve a Model 3, a car that won’t be available until the end of next year.

Demand was running so hot before the event that Musk had to announce that each person in the store or online could only buy two cars. No Costco-style bundling.

During his presentation, Musk said in the last 24 hours alone, 115,000 customers had reserved the car. That number continued to climb throughout the show and, at last check, was reportedly approaching 150,000.

Musk said the Model 3 price starts at $35,000, as expected, and that orders would be delivered by next year. He came up short of making that last one a firm promise, however. Any number of issues could arise that could potentially push the car’s arrival into 2018.

The car has room for five adults, and — this is important — can fit a 7-foot surfboard inside the cabin, according to Musk. He also claimed the Model 3 will have 5-star safety ratings in all categories as well as a range of 215 miles — more than the original vow.

And how about the speed? It’s quick. Even the base model will hit zero-to-60 miles per hour in less than six seconds. It’s not the “ludicrous” pickup of the six-figure Model S, but it’ll still pin your head back.

But before Musk even got into the car’s specs, he started the show by preaching environment. “Why does Tesla exist?” he asked. “It’s very important to accelerate the transition to sustainable transport. This is really important to the future of the world.”

If Musk is feeling the weight of what many see as a pivotal moment in the electric car company’s future, you wouldn’t know it from this latest spectacle. He was as confident as ever, striking all the right notes with both the attendees and those taking it all in on the Internet.

2023 Hyundai Palisade First Drive: Almost As Good As A Minivan

Wall Street shares continue to fall for the fourth day