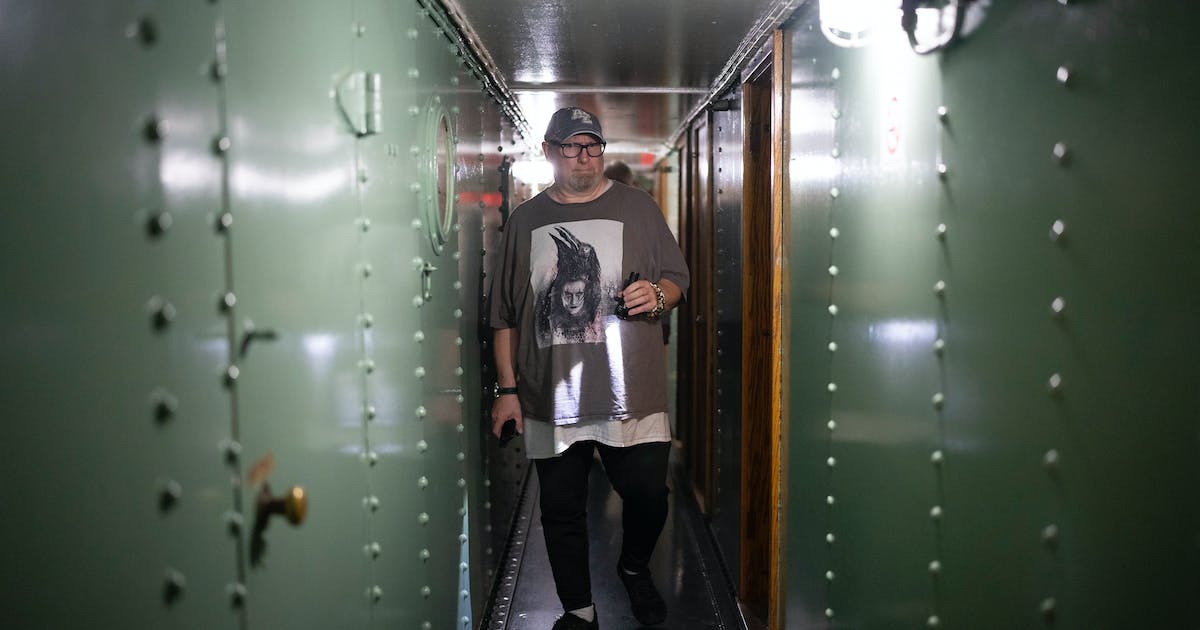 DULUTH — On a windy night in late September, debris skitters across the deck of the William A. Irvin as the 85-year-old lake freighter screeches and groans.

This former iron ore ship, one of this city’s premiere destinations for ghost hunters, is rich with creepy anecdotes — the inexplicable clang of chains, disembodied footsteps, bearded apparitions that disappear into a wall. Paranormal investigators aren’t looking to prove it’s haunted — they already believe it is. They want more evidence. This is a reputation its keepers at the Duluth Entertainment Convention Center lean into. In addition to hosting supernatural seekers, the Irvin gets a gruesome makeover for tours during the Halloween season.

As the Haunted Ship, the jump scares are created by living, breathing, fully formed humans in tattered and bloodied costumes. On this September night, though, it’s about the figures that aren’t living, breathing or fully formed. Nearly a dozen paranormal investigators have split up across the ship to look for signs of spirits — whether its inexplicable sounds, movements or figures.

Many ghost-world curious ask for permission to do the same, but so far it has been open only to paranormal investigators in search of unexplained footsteps or sensations, a glimpse of the woman in white or a little girl — maybe the spirit of an old ship captain.

Requests to investigate are taken on a case-by-case basis, according to DECC communications director Lucie Amundsen. The biggest hurdle, she said, is staffing. During a recent investigation, she and other staff members were aboard the Irvin until at least 2 a.m. They were there at their own risk.

“The message I got — the front of the boat is going to be alive tonight,” said Chris Allen of the Duluth Paranormal Society before a recent “investigation.”

He describes himself as sensitive to the paranormal. He says the spirit of a young girl followed him back to Duluth from Maryland years ago and has stuck around. Amanda Brown is an amenable ghost, willing to turn off the lamp in his living room upon request.

He showed a video — a lamp self-extinguishing — to prove it.

Allen is familiar with the William A. Irvin and its otherworldly hotspots. He has been on at least 20 ghost-hunting missions on board the ship, a floating museum docked in Canal Park and a tourist destination by day. His phone holds pictures of blurred and inexplicable images — one from an investigation where something from beneath a bed seemingly touched his foot.

Packs of investigators scattered to opposite sides of the ship with recording equipment, motion detectors and phone apps meant to interpret otherwise unintelligible word-like sounds from the spirits. A small crew set up its surveillance in the operation headquarters, the ship’s guest dining room, surrounded by wires, duct tape and energy drinks. They monitored screens with footage from cameras stashed in corners of the ship and waited for signs of activity — or more often on this night, a lack thereof.

Allen went to the crew’s living quarters. Along the way, Jeff Crowe, who works on the ship, noted that this section creeps him out based on an experience.

“I heard footsteps,” he said. But when he came around a corner, no one was there. He demonstrated how hard a person would have to walk to make a similar sound.

Allen set an electromagnetic field detector in the middle of the long dining table. The device’s lights blink when it encounters high levels of radiation — a sign of ghostly energy or, maybe, a nearby iPhone open to Instagram. He opened an app used to amplify and record real-time sounds that would be otherwise inaudible. Certain words emerged through the EchoVox app — including Allen’s first name and the sharp sound of “chhpps.”

Allen held his hand to his heart.

“Are you not happy we’re back here?” he asked into the void and then told the group, “There’s a lot of anger here.”

It was hard to discern the response from his EchoVox, which can sound like a layering of radio stations.

In the other half of the ship, members of Death Calm Paranormal sat on the floor. A beeping box with light knobs was used to detect movements from unseen sources, and Tori Tanley held an Ovilus to interpret what the spirits were trying to say. In intermittent bursts, the device would spill random words or names in a robotic voice.

Brandon Cole asked questions to determine the identity of any beings in the room.

Her friends tried to piece together what it might possibly mean.

Jay Stoneburner, wearing a mask dotted with images of Edgar Allen Poe, lifted the back of her shirt to show two red scratch marks from an unknown source. She got them while in the bathroom of the ship’s bunk area early in the evening.

“I felt my skin get hot,” she reported.

Other investigators said “William told us to leave,” seemingly a nod toward William Wuori. The late seaman is the only known person to have died aboard the ship. Newspaper accounts from the 1960s reported that he was on watch in the fireroom when a boiler tube broke and he was fatally scalded.

Crews that toured later in the night were mostly foiled — but not necessarily unscathed.

At one point, Allen led a team to a spot on the Haunted Ship tour — a room filled with dirty vintage dolls and an old grandfather clock that has been a site of activity in the past.

He tripped the motion detector on an animatronic doll with a mess of dark curls and glowing eyes. She came to life in jerky movements and said in a sickly sweet voice: “I like to watch you when you sleep.”

This, Allen said, might have been the most interesting thing to happen all night.

In New Zealand, a 23-million-year-old fossil is carried away by parties unknown