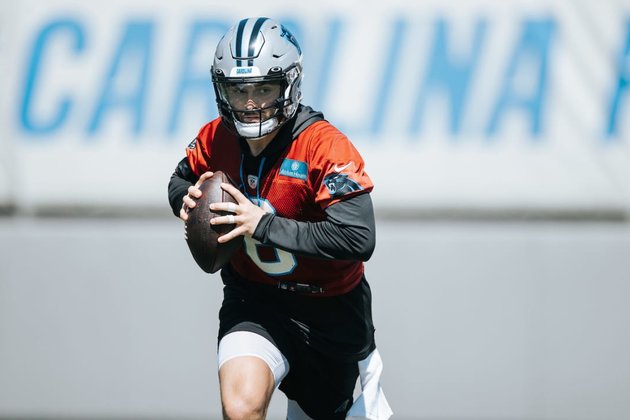 CHARLOTTE – Baker Mayfield said he takes “full ownership” for the Panthers’ offensive showing through the first two weeks this season.

In a post-practice press conference Wednesday, Mayfield redirected a question about his performance back to the larger goals. The Panthers rank 28th in total offense, 30th in passing offense, and 29th in third down conversion rate headed into Week 3 against the Saints, but the 0-2 start weighs more heavily on his mind.

“Not good enough,” Mayfield said. “I only care about winning, no matter what my stats are. (I) haven’t taken care of the ball well enough. That’s pretty much the only stat I really care about.

“I’ve got to command this group better. I have to lead better. I have to make sure everybody’s on the same page to where we are executing at a much higher level. The biggest disappointment for me is that hasn’t shown yet. I take full ownership for that as an offense.”

Mayfield has completed 53.6 percent of his passes (30-of-56) for 380 yards, two touchdowns, and an interception in losses to the Browns and Giants.

But the third down numbers have been a particular concern. The Panthers have converted 26.1 percent of their third-down attempts (6-of-23) and ended a loss at the Giants by converting none of their five second-half attempts.

Mayfield said the keys to improvement on third down would be limiting missed assignments, locking into plays, playing fast, and reacting well to coverages they haven’t seen before, which all translate simply to execution.

“There’s no need to be any more uptight or anxious when it comes to third down,” Mayfield said. “We just have to play our own game and go do it.”

Mayfield, who joined Carolina’s roster two weeks before training camp, said he felt like the Panthers’ offense has shown its potential in “little stints” and “flashes,” like a 75-yard touchdown connection to Robbie Anderson in Week 1.

Mayfield said he felt the Panthers have been running the ball well. Carolina’s 200 rushing yards are ranked 20th in the league, but star running back Christian McCaffrey posted over 100 rush yards in a single game for the first time since 2019, after his usage went up in Week 2 at the Giants.

He said he wants to improve the passing game, ranked 30th in the NFL with 336 total yards. But Mayfield also said he believes it takes more than training camp and preseason reps to lock into a new offensive system.

He said it takes “live games and real action” for both offensive coordinator Ben McAdoo to get to know him, and for him to get to know the offensive system, what the Panthers are good at, and what they’re most comfortable running.

“There’s growing pains,” Mayfield said. “The first two weeks were a really good test for us, but we just have to keep on pushing forward because there’s a lot of ball left. . . .

“Nobody’s hitting the panic button yet. It also helps that we’ve lost by a total of five points. (We have to) fix our mistakes, just play the game at hand, and correct it.”

– Wide receiver Robbie Anderson also spoke to reporters Wednesday, sharing that the Panthers are “committed” to improvement through a tough stretch.

Anderson has brought in eight catches for 134 yards and a touchdown through the first two games, but he also lost a fumble at New York. He said he and the offense are learning from the mistakes of prior weeks and keeping a forward-facing attitude despite the result.

“(We’re) simple things away from really being where we want to be,” Anderson said. “I’m just motivated by that.”

– Cornerback Donte Jackson landed on the injury report on Wednesday with a hamstring injury suffered last week. Head coach Matt Rhule said it’s too soon to know whether or not Jackson, who sustained the hamstring injury during the Giants game, would be able to go this Sunday against New Orleans.

Rhule said the plan without Jackson would be to start Jaycee Horn and CJ Henderson at the corner spots, and use Myles Hartsfield at nickel.

McCaffrey was listed on the report for his non-injury-related rest day, as Rhule said would become routine for the high-usage running back throughout the season.

– Rhule knows that during an 0-2 start, no one wants to hear about how close the Panthers have come. But he also said he likes the focus of the team on correcting the mistakes, and changing the results.

“We’re not saying ‘Hey, it’s OK,’ we’re supposed to win. We’re here to win,” Rhule said. “Make no mistake, when we walk in here in Monday, there’s no ‘It’s OK guys.’ There’s a bunch of angry people here that are dying to win and they work their tails off. So any thought that there’s a loser’s mentality in this building is a falsehood.

“The thing is, we’re close, but every team’s close. You’ve got to make the plays down the stretch to go win the games. And that’s the message.”

Video resurfaces of an APS teacher using a racial slur