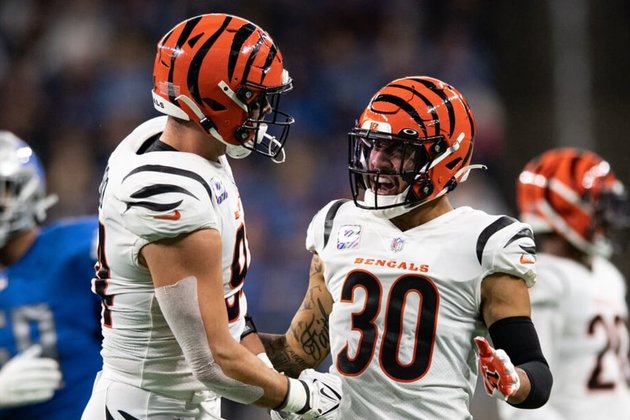 Up next, Cincy Joe Vs. Jersey Joe.

Jets quarterback Joe Flacco, who makes his 21st start against the Bengals Sunday in New York (1 p.m.-Cincinnati’s Local 12) has been around so long that his NFL debut came on the 100th birthday of Paul Brown and in a game between the Bengals founder’s two teams.

But since then the Bengals are 11-8 against Flacco and have held him to 21 touchdowns while picking him off 25 times. That’s by far the most interceptions he’s had against one team and more than double what the Steelers (12) have against him in 21 games and nearly double what Cleveland has (13) in 21 games.

And it’s just not ancient history weaving back to the Zim Dynasty. The last time Flacco played the Bengals, rookie free safety Jessie Bates III got his first NFL interception and rookie left end Sam Hubbard got his first NFL sack against Flacco in the Bengals’ 34-23 win over Baltimore in a Thursday night game in Paycor Stadium. They are the only two guys left from that defense that held him to a 76 passer rating that night even though he threw for 376 yards.

Zimmer and his disciple who succeeded him as DC, Paul Guenther, the Jersey-bred Flacco’s buddy from Philly, had a pretty good handle on him, but it was Teryl Austin’s defense that got that last Bengals’ win against Flacco.

Flacco’s not exactly a civic statue yet as a dangerous one-time Super Bowl MVP. But mobility has never been something he’s known for, although the longest run of his career is still the broken-play 38-yard winning touchdown he rambled for in his debut. So now that he’s 37 years old doesn’t change it all that much. In their 20 games against him, the Bengals sacked Flacco at least in all but two of the games, multiple times in 11 games and at least four times in four games.

After a sack in each of their first two games, you have to figure the next Bengals defensive coordinator, Staten Island’s Lou Anarumo, is looking to pressure Jersey Joe. Last season they only had four games with a sack and one with none.

“At the end of the day, you don’t have as many sacks as you’d like early on,” said Bengals head coach Zac Taylor after Sunday’s game. “They gave up 14 points to start the game and then after that, they played really lights out aside from those two field goals there at the end. So our defense is playing really well.”

Flacco is hot in place of the injured Zach Wilson. He’s coming off an exhilarating 307-yard effort that generated 14 points in the last 1:55 in that stunning 31-30 win in Cleveland. Flacco has one game winning drive against the Bengals and hit better than 307 yards three times against them while amassing a career passer rating of 72.6 vs. Cincy, 12 points below his career mark.

FEELING IT OUT: Before the NFL switched to a 17-game last season, a lot of coaches looked at the year in quadrants. Even if it is not an even quadrant now, they still do.

Bengals offensive coordinator Brian Callahan is not happy looking for that first touchdown in the first half, but he’s also patient halfway through the first quadrant.

“I think that we’re still finding out a lot about our team. Every year you do,” Callahan said on Monday. “I’ve always believed that. The first usually four weeks of the season you learn a lot about what your team is made of, what your strengths are, what you’re good at. Just because you were good at something the year before doesn’t mean you are automatically going to be good at it the next year.”

He acknowledges they are working through things (13 sacks, no pass longer than 24 yards) but he believes it’s a stage.

PRIORITIES: As the Bengals start practicing Wednesday in preparation for the Jets, the priorities for the offense figure to be protection and communication, summed up on that final play in Dallas Sunday that they had to yell into the huddle when the headset communicator went out.

But what blew up the play was Cowboys cornerback Trevon Diggs’ alert, sure tackle on wide receiver Tyler Boyd isolated on him on a short route over the middle.

“Diggs did a good job. He was communicating which we were hoping with a quicker snap,” Callahan said. “He did a good job taking an extra step to be able to be in position to run through the mesh and tackle TB. That was, we almost had what we wanted, but we didn’t.”

But they are not ripping up the playbook this week. Instead, Callahan left Dallas encouraged by scoring in three of the last five drives.

“If you are always trying to invent new things or do new things you don’t have reps invested,” Callahan said. “You don’t have looks. The best quarterbacks tend to have a handful of plays they really like because they have seen them against every coverage, every look and every blitz and they know exactly where to go with the ball. They can play fast.

“That’s part of it. You do have to create and play differently. You can’t always stay the same. It’s a fine balance. You have to have some new and some fresh and keep things progressive on offense. But sometimes you have to lean on what you do best in a tight spot. I thought we did that … trying to come back.”

Cineworld confirms it is considering US bankruptcy | Cinema world