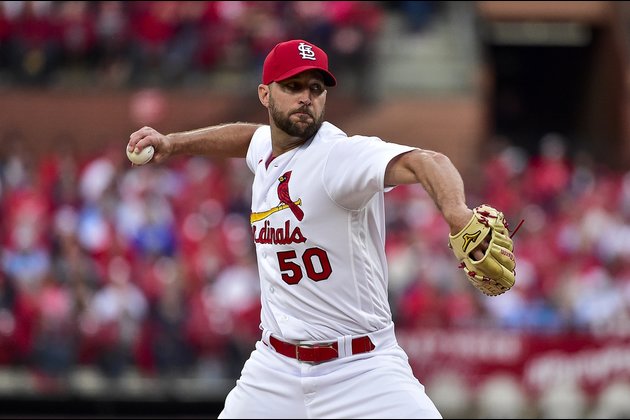 The fans might not like each other in the intrastate rivalry, but there’s enough overlap between the St. Louis Cardinals and Kansas City Royals that there’s at least some cooperation going on.

The Cardinals and Royals will conclude their two-game series Wednesday afternoon in a 12:10 p.m. localstart that was moved from the original 6:10 start because of rain in the forecast in Kansas City. The Cards will send right-hander Adam Wainwright (2-3, 4.00 ERA) to the mound to face left-hander Kris Bubic (0-2, 10.50).

On Tuesday, the Royals exploded for a season-high 15 hits in a 7-1 defeat of the Cardinals that snapped a four-game losing streak. Bobby Witt Jr. hit his first major-league home run and another prized rookie, M.J. Melendez, collected his first hit in his debut.

Wednesday’s game looks like a mismatch on paper, especially looking at the starting pitchers, but Wainwright said that can be deceiving.

“He’s very talented,” the veteran righty said Tuesday about Bubic. “I know he’s got a bright future ahead of him.”

Wainwright came up in the Atlanta Braves organization, where he learned from many of the Royals current front office personnel. He has spent his entire 17-year career with the Cardinals, where he played with and for some of the Royals on-field staff.

“I’ve talked to some of their young guys about pitching length,” he said. “There’s a vast network of scouts and coaches over there that came up with me in the Braves organization. A lot of their coaches are former Cardinals. Sometimes they’ll reach out and ask me to talk to one of their guys about pitching. I’ve done that several times.”

Wainwright, who is 6-3 with a 3.90 ERA all-time against the Royals, said he wouldn’t allow himself to be distracted by how the Kansas City hitters are struggling.

“I know how they’re doing,” he said. “I know who’s hot and who’s not. But I still have to go out and execute pitches.

“That’s a very talented young team over there. I look forward to pitching to those guys. This is one of my favorite parks (Kauffman Stadium) in all of baseball. It feels like baseball when you’re pitching here.

Bubic has struggled this year, but he seemed to latch onto something in his most recent start against the New York Yankees on Friday. He gave up three runs on four hits in five innings. He was in a 3-0 hole after four batters, but he retired 14 of the next 15 hitters he faced. The Yankees went on to win 12-2, scoring nine runs off the bullpen.

“I’d like to continue the momentum I had the latter part of the outing I had, where I kind of found a good rhythm,” he said. “It was really the first time this year I’ve found any rhythm.”

About go up against Wainwright, Bubic said he won’t put any extra pressure on himself with the veteran on the mound.

“I recognize who’s on the mound for them, but I think as long as I can take care of what I need to do I’ll be OK,” Bubic said. “Obviously he’s a great competitor. There’s a reason he’s been so successful for such a long time.”