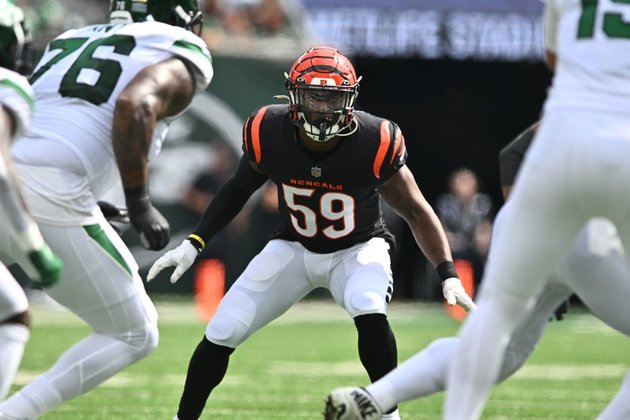 Bengals linebacker Akeem Davis-Gaither began Thursday like he has begun many days of his 25 years and read a text from the guy he calls, “Coach Dad.”

“Good morning, Akeem,” wrote Keith Gaither. “Focus is on improvement. You will get the results when that is the focus.”

While Gaither had some time to kill in Atlanta before Thursday night’s game at Georgia Tech, his son prepared for Sunday’s looming slugfest (1 p.m.-Cincinnati’s FOX 19) against the Falcons at Paycor Stadium. Somewhere during the week, Coach Dad snuck in a video of the Falcons’ pin-and-pull Truck run for him to study.

“He’s improved so much in year three from years one and two,” said Gaither, Virginia’s special teams coordinator and running backs coach, before a 16-9 victory. “He’s got a busy schedule. I’ve got a busy schedule. But we try to make sure we talk every day. One minute. Five minutes. I try to give him some motivation.”

Davis-Gaither may be doing much more than getting motivated Sunday. Middle linebacker Logan Wilson (shoulder) has yet to practice this week and looks to be questionable in a slight speed bump on his way into the NFL elite. But there’s plenty of confidence plugging in Davis-Gaither, the former college hybrid safety who mixed it up for 13 tackles last month in the win over the Jets when Germaine Pratt, the other starting backer, went down.

“Playing in the box. That was it,” said Davis-Gaither with a smile before Thursday’s practice, recalling the knock coming out of Appalachian State. “I’ve been working on my craft. Getting with guys like Germaine. My dad sees the game at a high level, putting in time with him. Working with Logan. See what they see.”

What they see is that ADG is not just a space guy that runs around with 4.4 40-yard dash speed. He can not only dish on the platter, but he can dish it out in the box.

The Bengals found out almost immediately when they coached the South at the 2020 Senior Bowl. Not only did they put him in the box, they made him the signal-caller (“the second practice, I think,” ADG says) and then spent the next three months hoping like hell he’d be there with the first pick in the fourth round.

“Loved him. Loved him,” says Bengals senior defensive assistant Mark Duffner, who loved him even watching the tape prepping for the Senior Bowl. “Athletic. He was in the meetings and on top of it. Paying attention. Exact. Athletic. Fast. He could move positions. Athletic.”

Go back to that first draft of the 2020s and it has to be the all-timer in Bengals history and not just because second-rounder Tee Higgins (ankle) is back practicing full this week with the overall No. 1 Joe Burrow in what promises to be a test of time against the economical and efficient Falcons.

Go back to the third round and Logan Wilson, who leads all NFL linebackers with seven interceptions since they drafted him. Go back to the first pick in the fourth round starting the last day of the draft.

“Duff called me that morning to tell me,” Davis-Gaither said.

Burrow-Higgins is heady enough. But Wilson and Davis-Gaither back-to-back?

Assistant linebackers coach Jordan Kovacs was there that week in Mobile, where his ability to go sideline-to-sideline was glaring. Linebackers coach James Bettcher, who arrived this season, praises him for his versatility and has no fear putting him in the box in a time-of-possession rock fight.

“We’ve talked about it before,” Bettcher says. “If you’re an NFL linebacker you have to know and play every spot. Our room has a lot of smart, versatile players.”

With two decades of college coaching under him, Keith Gaither knows a good room when he sees one. He loves his son’s room. There is Wilson and he knows of Pratt because he played his high school ball about a half-hour from Akeem in the Piedmont Triad region of North Carolina and his son tells him about the reams of tape Pratt watches and how well he understands the game.

He sees Markus Bailey leading the team in special teams tackles. He knows what Clay Johnston did in the preseason and what Joe Bachie did last season.

“I’m not just a fan of Akeem, I’m a fan of all those guys,” Keith Gaither said. “I hope Logan is OK, but if he’s not I’d like to see Akeem get out there and try to take advantage of every snap he gets.

“The good thing is that room has a good bunch of young players. Pratt, Logan. Akeem, Markus. They’ve done a great job upgrading that room with good players and youth.”

Davis-Gaither’s career was predictable for the first year and a half. A lot of sitting and learning and putting on weight and playing special teams until he suffered a season-ending injury against Cleveland last year at the halfway point. He used the heartbreak to get better as Coach Dad’s texts came to life and he spent even more time with him after their seasons ended.

“The biggest thing for Akeem is he’s playing so much faster inside the box as a linebacker,” said Keith Gaither. “Coming out of college he was a rover outside playing in space. He’s got a better understanding of the position. He’s getting to know how to get off blocks, how to take on blocks. The reads are different. I think he’s adjusting and learning. He’s learning how to be a pro.

They figure he came in at about 210 pounds. Now Keith thinks he’s anywhere between 224 and 230 pounds. And a lot wiser.

“Now he understands every play counts,” Gaither said. “One game it could be 40 snaps (it was 54 against the Jets) and another game it could be ten (it was 11 last week in New Orleans) and you have to be ready. And I think he’s playing harder on special teams.”

Bengals special teams coordinator Darrin Simmons knows he’s got the son of a coach and admires him. He says, “That’s how I’d want my son to be.” But, like Coach Dad, he keeps reminding of improvements.

“I think it was against Baltimore,” Gaither said.

It was, Simmons said.

“He missed an assignment and almost got a punt blocked,” Gaither said. “I’m sure Coach Simmons got after him.”

He did, Simmons said.

“Can’t do it,” Gaither said. “If you get a punt blocked, you’re probably going to lose the game.”

If it sounds like Coach Dad is watching, he is. Every Tuesday the Virginia staff gets tape of every NFL game and Keith Gaither combs through it looking for any technique that can help his backs or scheme that he can spring on kick cover.

“And I get to watch my son,” Gaither said. “I’ll critique him. Let him know what I think. Baltimore ran a reverse and the ball’s on the ground. He kind of hesitated. ‘Hey pull the trigger. Even if you don’t make the tackle you get him inside for your teammates. Trust your God-given ability. Pull the trigger.'”

Keith pulled the trigger this week and sent him that “Truck,” play the Falcons run.

“Two guys down blocking on the edge. Two pulling to the perimeter. A toss sweep,” Gaither said. “Everybody in football runs the same plays. You just have to be aware. I’m always looking for the edge. If I can help, I will.”

There may be a lot of critiquing going on, but there’s also more pride and love. Tuesdays just may be his favorite day.

“I get to watch my son,” Keith Gaither said. “That’s pretty neat.”