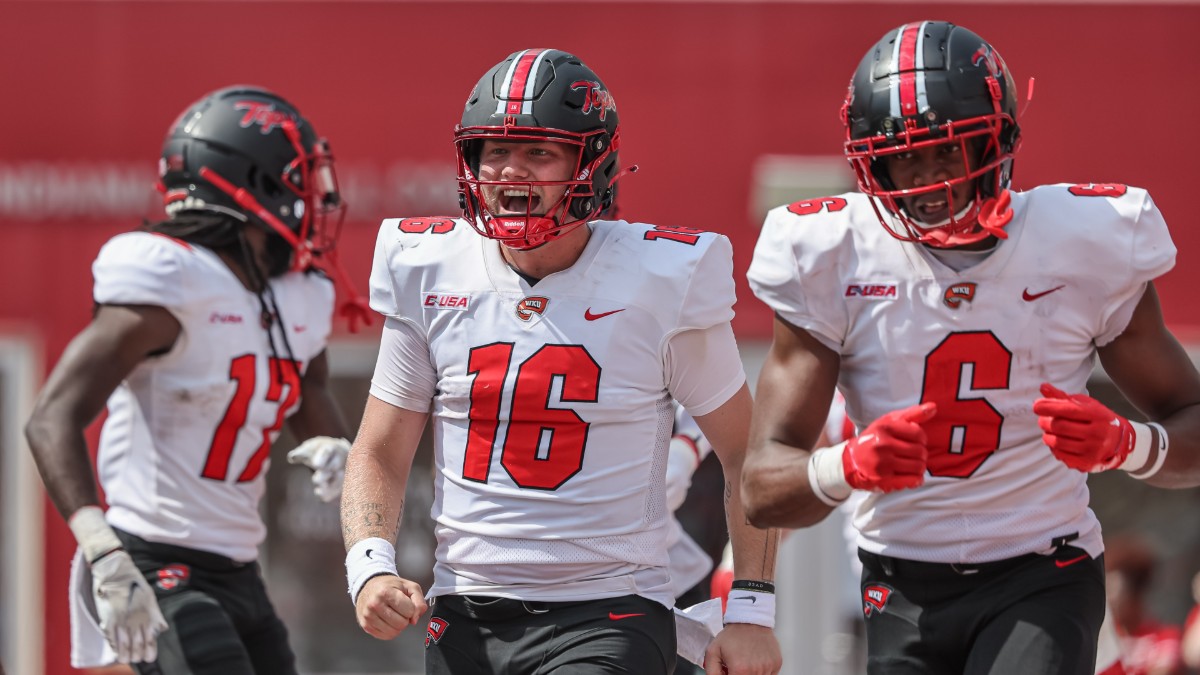 Florida International enjoyed a much-needed week off before traveling to match up against Western Kentucky.

The Panthers are licking their wounds after losing by 29 points to Texas State, which dropped them to 1-1. The program’s only victory came in overtime to its FCS opponent, Bryant. That will likely be FIU’s lone victory this season, as it sits near the bottom of the nation in power ratings.

A matchup against a high-powered Western Kentucky offense appears, on paper, to be a recipe for disaster. The Hilltoppers are coming off of a devastating overtime defeat against Indiana after leading for nearly the entire game.

Western Kentucky will have a sizable advantage in every aspect of this matchup against Florida International, but will it be enough to cover?

I sure hope Florida International enjoyed that overtime victory over Bryant because it’s likely the only one it’s going to have all season.

The Panthers were double-digit favorites in that matchup and snuck out the win by the narrowest of margins.

The program followed that performance up by getting stomped by Texas State, 41-12.

Florida International’s offense plays at the second-fastest pace in the country, averaging just 19 seconds per play. But the quick playing style hasn’t resulted in much success.

The offense has had no rushing threat, averaging 2.7 yards per carry and ranking 100th in Success Rate. That’s the reason the Panthers throw the ball on 70% of their plays.

Quarterback Gunnar Holmberg was knocked out of the opener against Bryant with a concussion. Before that, he threw for 103 yards on 20 attempts.

Backup Grayson James led the comeback charge, tossing four touchdowns in that matchup. But James came back to earth against Texas State, as he didn’t even reaching 200 yards passing on 47 attempts — including two interceptions.

Head coach Mike MacIntyre hasn’t announced who the starter will be, but neither are viable options to keep up with Western Kentucky.

The FIU defense is the main concern in this matchup. The group was torched through the air by Bryant, allowing 350 yards (8.5 YPA) in the Week 1 matchup. And then on the ground, the Panthers were pummeled against Texas State, letting up 225 rushing yards (5.3 YPA).

The group ranks 119th in the nation in coverage, according to PFF, which will be on full display in this matchup.

Western Kentucky was seconds away from its first-ever win over a Big Ten program on Saturday. The Hilltoppers had a 44-yard field goal attempt go wide right as time expired.

Indiana ultimately sealed the game in overtime with a 51-yard field goal of its own.

If we learned anything from that matchup, it is that head coach Tyson Helton’s offensive scheme was no fluke last season.

Despite losing quarterback Bailey Zappe (6,000 passing yards and 62 touchdowns) — along with the top two pass catchers and running backs in the offseason — the offense hasn’t missed a beat. Helton has plugged-and-replaced those positions, and has proved his scheme is a well-oiled machine.

Quarterback Austin Reed is putting up just shy of 300 passing yards per game, while averaging 8.1 yards per pass attempt. He’s tossed nine touchdowns to three interceptions, and has shown continued improvement in the offense in each game this season.

The offense is reliant on finding success through the passing attack. The group ranks 16th in Passing Success Rate and has kept Reed clean, allowing just one sack while ranking fourth nationally in Pass Blocking.

The Hilltoppers’ defense ranked 24th in the nation in returning production. That experience will be useful in this matchup against an FIU offense that ranks outside the top 100 in nearly every advanced metric out there.

Toggle the dropdowns below to hide or show how FIU and Western Kentucky match up statistically:

I don’t believe there is a program in the FBS that is worse than Florida International. The Panthers needed double overtime to survive their FCS opponent and were dismantled by Texas State.

Now they match up against one of the toughest offenses to prepare for in Western Kentucky.

The Hilltoppers will come out firing on all cylinders after their devastating overtime defeat to Indiana. Reed hasn’t missed a beat since winning the starting job and will pick apart an FIU defense that ranks 119th in pass coverage.

Florida International’s offense has major question marks at the quarterback position with two bad options. The group plays at an extremely fast pace, which is going to hurt it in this matchup.

Florida International’s defense is going to let up explosive scoring plays and after quick 3-and-outs, it will find itself right back on the field.

This is a horrid matchup for the Panthers that is going to snowball out of control quickly.

Fresno crews dealing with rise in fires this summer