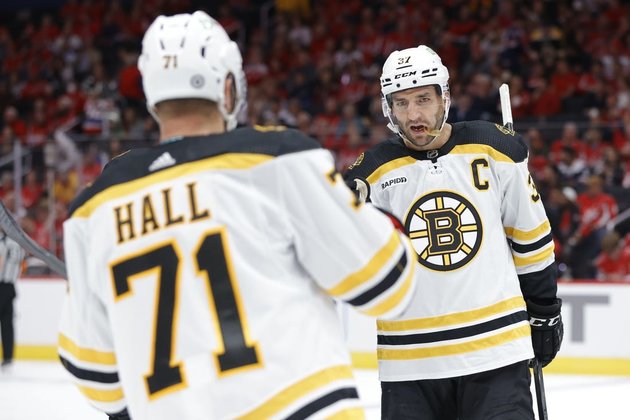 David Pastrnak and David Krejci accounted for seven points as the Boston Bruins opened the season with a 5-2 win over the host Washington Capitals on Wednesday night.

Pastrnak (one goal, three assists) and Krejci (one goal, two assists) led the way offensively to give Jim Montgomery a victory in his first game as Bruins head coach.

Patrice Bergeron, Taylor Hall and Hampus Lindholm rounded out Boston’s scoring, while Linus Ullmark made 33 saves, including 12 in the first period and 13 in the third.

Krejci’s three points marked his first in an NHL game since May 10, 2021. He played for HC Olomouc in his native Czechia last season.

The win came at a cost as Jake DeBrusk suffered an upper-body injury and didn’t return for the third period.

Anthony Mantha and Conor Sheary scored for Washington, which had a streak of five consecutive season-opening wins snapped.

Darcy Kuemper made 25 stops in his Capitals debut.

Washington started on the front foot and drew the game’s first power play, but it was a Boston man advantage that produced the first goal. At the 7:58 mark, Bergeron followed up Pastrnak’s shot and buried a rebound that trickled loose in the low slot.

The Bruins’ lead doubled at 15:03 as Pastrnak surprised Kuemper with a turnaround shot after carrying the puck from the corner into the right circle.

Boston took a 3-0 lead at 6:14 of the second. Hall finished off a tic-tac-toe passing play with Pastrnak and Mike Reilly.

The Capitals broke the shutout just 1:20 later as Dylan Strome toe-dragged and fed Mantha for an easy finish at the end of a 2-on-1 rush.

Another odd-man rush led to Sheary slotting home a wrister from the left side to bring Washington within 3-2 at 12:43.

Kuemper made a key save on Brandon Carlo’s breakaway coming out of the penalty box in the final seconds of the second period, keeping the home team’s deficit at one.

The score remained 3-2 through the first half of the final frame after Ullmark stopped a Lars Eller short-handed break.