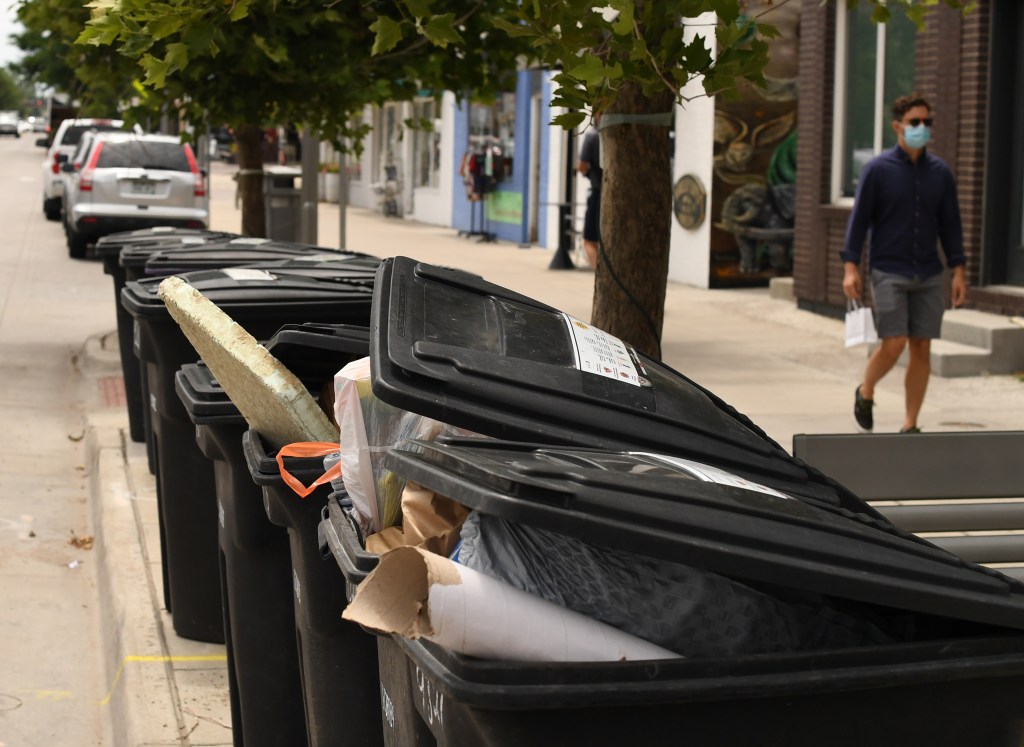 Denver residents, long accustomed to free garbage pickup, would face new bills of $9 to $21 a month for that service starting in October — and get free yard waste compost pickup — under an overhaul city leaders favor to align pricing with climate-friendly goals in dealing with waste.

Residents still would receive free recycling pickup — every week instead of every other week as at present — if the 13-member city council approves this overhaul next month.

It also would authorize enforcement citations, like parking tickets, for residents who intentionally dispose of garbage in recycling bins — and additional waste inspectors would be hired. The penalty amount isn’t set.

Denver officials said the idea is to attack the huge volumes of waste hauled to landfills by incentivizing recycling – which has been free except for the yard and food waste composting, which costs $9.75 a month.

The estimated 193,988 tons a year of garbage that Denver buries in landfills — an amount that increased by more than 5% between 2019 and 2020 — emits heat-trapping methane gas.

Federal agencies have determined landfills remain a major source of methane in the atmosphere that accelerates global climate warming, which leads to increased fires, drought and other calamities.

“Right now, we’re asking people to pay for something we want them to do — compost recycling. And we’re providing them — for free — trash pickup service. This really doesn’t incentivize anybody to change their waste disposal behaviors,” said Grace Rink, director of Denver’s Office of Climate Action, Sustainability and Resiliency, who worked with transportation and infrastructure officials on the proposed overhaul.

“If we can get composting out of our trash bins, that’s 50% of what goes into landfills and creates methane,” Rink said. “People have told us they want us to address climate change. And climate change has told us time is running out.”

An estimated 20,000 low-income residents would qualify for free or discounted waste services.

Other cities around metro Denver and elsewhere have developed municipal waste policies that incentivize recycling. In cities where residents rely on private waste haulers, prices for garbage pickup and recycling exceed what Denver would charge for waste services.

Denver currently lags behind other cities and the national average for recycling. Roughly 26% of waste was diverted from landfills in 2020, city data show, compared with 34% nationwide. City officials said they want to ensure 50% of waste is recycled before 2027.

Under Denver’s new approach, residents would pay $9 a month for a small garbage bin (35 gallons), $13 for a medium bin (65 gallons) and $21 a month for a large bin (95 gallons). City crews would empty these weekly.

Those crews currently provide municipal waste services at 180,000 single-family households and buildings with seven or fewer apartments. Only about 30,000 pay the $9.75 a month for composting. They would save 75 cents a month under the new pricing if they opt for small bins.

“As part of the proposal if it passes, we will hire additional inspectors to check carts for contamination. Education will be the first step as we work to build compliance. Contamination fines only exist as a deterrent and will follow after multiple warnings,” city spokeswoman Nancy Kuhn said in an email. “Fine amounts are being discussed.”

The revenue city officials expect to collect from new garbage bills — around $35 million a year — is based on a projection that 45% of residents will choose the large 95-gallon garbage bin with 40% opting for the medium 65-gallon bin and 15% the small 35-gallon bin. And officials said the money will be used only to cover the cost of waste services — not to generate additional revenue for the city budget.

Denver residents long have benefited from free garbage pickup. If a resident fails to pay a garbage bill, city officials said, that household would receive notices similar to those sent when residents don’t pay fees for other city services. Unpaid bills persistently ignored could, after a multi-year process, lead to liens on property. However, city officials said nobody’s ever lost property for failing to pay city service fees and that liens typically lead to lost property fewer than five times a year when property taxes haven’t been paid.

Council members questioning the waste pricing overhaul include Candi CdeBaca. “As it stands, it needs some serious modifications. I absolutely believe recycling and composting should be free and expanded,” CdeBaca said. But provisions to help low-income residents aren’t sufficient, she said.

Denver voters in the upcoming 2022 November election will face a ballot initiative on whether to expand recycling further by requiring that all Denver businesses — including restaurants, hospitals, large apartment buildings, hotels and sporting arenas — provide waste compost and recycling services.

Councilman Kevin Flynn said he opposes the overhaul of waste services pricing. It would bring minimal gains because residential trash collection accounts for only 18% of waste generated around the city, Flynn said. He cast fellow leaders’ efforts as “hoping to squeeze blood from a turnip.” He advocates, instead, focusing on recycling and composting at large residential and commercial properties.

“With our current inflation and rising costs for gas, electricity, water, rents and home prices, it’s time to tap on the brakes for a while and not pile onto our residents with another new fee,” Flynn said. “We’re making it harder and harder for working families to live in this town with added expenses year in and year out.”

Something Local to donate thousands to teachers

‘Special’ house in Omaha’s Walnut Hill neighborhood even has a castle...