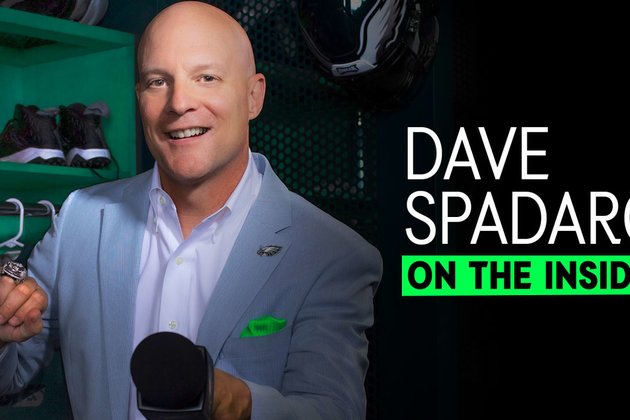 “No more Zoom,” defensive end Brandon Graham said as he took his seat in front of a media audience at the NovaCare Complex on Wednesday. It’s real and it’s welcomed to see the players face to face in interviews once again. Here are some takeaways from the afternoon that had Darius Slay, DeVonta Smith, Jason Kelce, and Graham answer questions.

1. Slay likes the youth in the secondary

Pro Bowl cornerback Darius Slay has some young players he thinks need some attention, like safety Marcus Epps, who played 16 games with three starts last year and did a good job in a three-man rotation at the position.

“He got a lot of reps (Epps played 45 percent of the defensive snaps), been playing a lot. He filled the role in real good and he’s always been ready and waiting for his time to come,” Slay said. “This is his time. I know the work he’s put in. I’m looking forward to seeing what can do.”

On second-year cornerback Zech McPhearson, Slay said: “Oh, he’s ready. Like I said, we’ve got a lot of trust in our room, a lot of belief. We’ve got a good coach (Dennard Wilson), very detailed, and I make it simple for (McPhearson). I just tell him to do his job and do it at the best of his ability. Nobody asking you to do extra or extra more.”

Slay had a brilliant 2021 season and earned a trip to the Pro Bowl, his first as an Eagle and the fourth in his NFL career.

“I know it’s a reward thing, but I honestly go down there to have a great time with my family, my kids, having my kids around professional athletes that they look up to besides myself,” Slay said. “I know the game is very important and all that kind of stuff but I really do it for my kids, see their excitement, meet some of their heroes. I know I work hard for what I earn and I work hard for them, too, so they deserve to go out and have fun, too.”

Along with everyone else, second-year wide receiver DeVonta Smith welcomes the addition of wide receiver A.J. Brown, whom the Eagles expect to complement Smith’s skills perfectly.

“I’m excited to learn from a guy like him,” Smith said. “Anytime you play football, you watch all the different receivers to see what kind of tools they have in their toolbox, so him being here learning from him. He’s been in the league a couple of years now, the experiences he had and the things that he do, some of the routines that he has that can help me elevate my game.”

Smith said his focus is on “attacking the small details” and “taking care of your body” in this offseason, something he cherishes. Smith said he wants to be better at “catching through traffic” and digging deeper into the offense, blocking and route discipline “to elevate your game just a little bit.”

The young wide receiver has a tough time, he admits, taking himself away from the game of football, so he spends a lot of time watching players from around the league – he mentioned Davante Adams and Keenan Allen – and working on his body and scheduling his workouts. Smith is strictly disciplined, and that’s part of his greatness.

“It’s hard for me to not think about the game and ways that I can improve,” he said. “That’s what I love to do.”

“Last year was a lot of fun towards the end of the year,” Kelce said. “Obviously, the playoff game (against Tampa Bay) didn’t end up well, but I think that for us we saw a lot of improvement. We saw the team get better throughout the year. I had a lot of fun with Nick (Sirianni) as the head coach and how everything went. When I stepped back and thought about it, first you’re thinking, ‘Physically, can you do it again and where do you feel?’ Once I kind of felt like I was OK on that end, it was pretty much a no-brainer. I still wanted to do another one (season).”

Kelce reacted over the weekend when the Eagles selected Nebraska center Cam Jurgens in the 2022 NFL Draft, saying how much he endorsed the pick and, in fact, had Jurgens rated as his “favorite player” in the draft.

“I’m pretty excited about the kid. I liked him a lot. I like his tools, I like his mentality,” Kelce said. “Probably overstated a little bit my involvement in that selection, so I’d like to step that back a little bit. I think I’ve looked at a few guys in the past couple years when they’ve asked my opinion. He’s here, obviously, because Jeff Stoutland and Howie Roseman, Nick Sirianni, all these people watched the tape and believe in him. Although he does have a lot of similar traits to me, he’s going to be his own player and I’m looking forward to helping out in any way I can with these young guys, particularly Cam.

“You always want to try and help young guys and help the team be better moving forward. I’m smart enough to realize that my time is limited and I’d like to be a part of something that’s … the only way you can live on in this game is through the players and relationships that you forged as a player. Your game is going to be what it is when it’s all said and done and that’s going to be, for me, a good track record. The way you make a lasting impact as a player, as a person, is how you influence other people and hopefully and help others realized their dreams. I think that’s a big part of being a veteran player.”

4. Brandon Graham has Comeback Player of the Year on his mind

The 2021 season was off to a great start for Graham and the Eagles’ defense and then Graham went down in the second quarter of a Week 2 loss against San Francisco and his year was over. A torn Achilles tendon sidelined Graham, who has worked hard in his rehab and says he is feeling great and has “no restrictions” right now. Of course, the Eagles haven’t yet put on the pads and gotten on the field, but Graham’s progress is very encouraging.

“I’m doing everything with the team and there’s been no drop-off or anything,” Graham said. “Now it’s just getting in shape shape (football shape).”

That’s great news for the Eagles, who missed Graham’s punch off the edge and his leadership on and off the field. In his 13th season with the Eagles, the longest-tenured professional athlete in Philadelphia, Graham has reached this point by “working hard and working smart,” and that’s the message he has for players who ask him the key to his success.

Philadelphia has added a lot to its defensive front seven in the offseason, signing linebackers Haason Reddick and Kyzir White in free agency and adding defensive tackle Jordan Davis and linebackers Nakobe Dean and Kyron Johnson in the draft.

“It gives us great depth together,” Graham said of his reaction to the Davis selection. “Man, I’m excited for Big Boy because he’s gonna be taking two and three people (pass blockers) with him and taking a lot off of us. I believe that he added more depth for us and it’s going to be a lot of fun bringing those guys when we get up to speed.”

At 34, Graham said he “still has a lot to prove. That’s how I feel because I didn’t play last year.” At no time did Graham say it was time to hang it up.

“That wasn’t me,” Graham said. “I was more so like, ‘Man, I know I love this game,’ because I know when it got taken away all I could think about was that day when I came back to be the Comeback Player of the Year. That’s where I’m at. That’s my mindset. I want to go out on my terms and hopefully we get another ring and I’ve got something to think about.”

NASA will fix a hydrogen leak to launch the Artemis 1 mission in late...

WATCH: A humpback whale rises level with boat off the Jersey Shore while a...