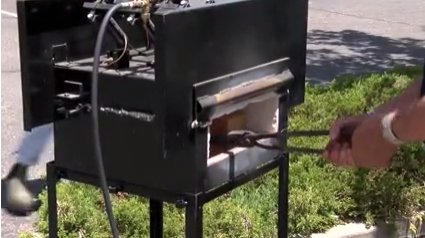 ALBUQUERQUE, N.M. (KRQE) – As discussions surrounding gun reform and safety happen across the nation following mass shootings in Buffalo, Uvalde, and Tulsa, people gathered in Albuquerque for Gun Safety Awareness Day, repurposing guns in an interesting way. Saturday at the La Mesa Presbyterian Church, many gathered to bring awareness to gun safety. For some who lost everything to gun violence, Saturday is about calling for change.

2 injured in shooting in Albuquerque

“My son was killed April 23 of last year by gun violence. And so ever since he died, I’ve just really put myself out there to try to lobby for law changes, to volunteer with all the different gun violence organizations, and to do anything that I can to try to help prevent this issue from continuing to grow,” said Angel Alire, who lost her son to gun violence.

Suspect in custody, accused of shooting at officers in Albuquerque

“We’re going to forge these into garden toys. I really love that idea right? I think there’s a product of like turning the swords into plowshares. So I think it’s a really great statement of solidarity to the people that have been murdered because of senseless violence. It’s a great statement,” said Garrett Venealasen, a gun owner who attended the event.

The event also included giving away free gun locks as well as entering people in a contest for a chance at a free gun lock. The district attorney’s office says that plan on continuing events like these throughout the year.

On Saturday, June 11, the district attorney’s office is holding a gun buyback at the same location. They say people can anonymously drop off their guns, no questions asked.