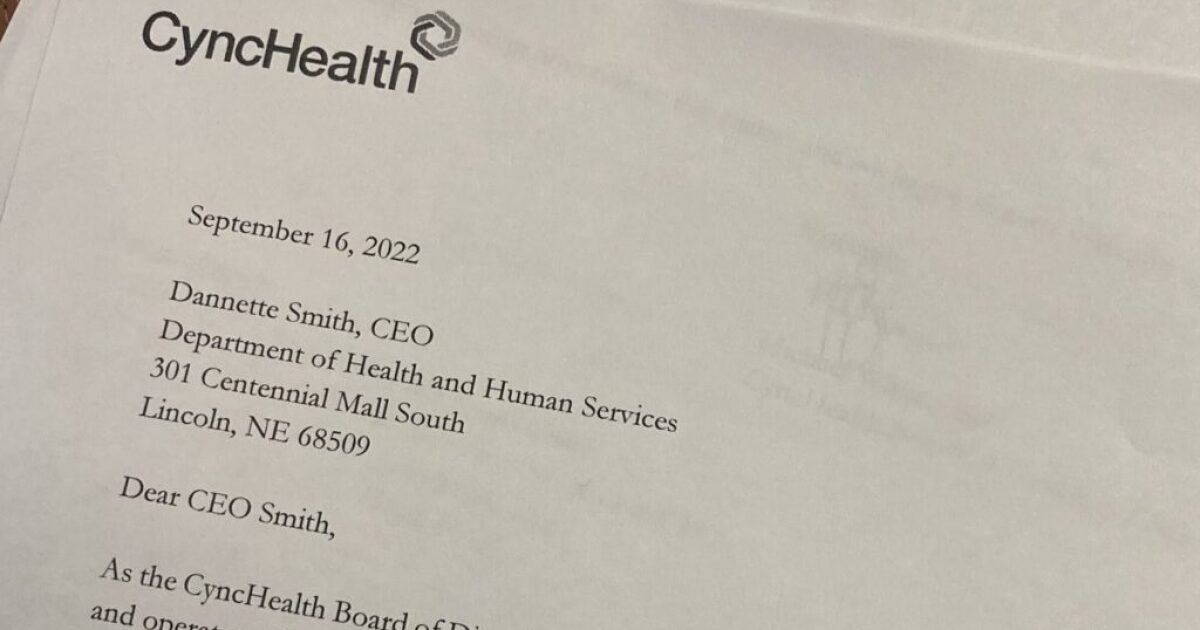 The state’s provider of health care data and prescription drug purchases says its services to doctors and hospitals are being threatened because the state is failing to fully pay up on a $15 million-a-year contract.

The lack of payments to CyncHealth prompted that organization’s board of directors — a group of hospital and health care administrators — to “implore” the Nebraska Department of Health and Human Services to fulfill its obligations and keep the data sharing network operating.

The lack of payments, the Sept. 16 letter stated, is an example of poor planning by the state and “unnecessary bureaucracy that is avoidable.”

“Providers will be hampered in providing optimal care to their patients if they are not able to access the HIE or PDMP, putting the health of Nebraskans at risk,” the letter added. “We implore you to fulfill your funding obligations….”

The letter was signed by 17 board members of CyncHealth, which includes representatives of the state’s major health providers, including Nebraska Methodist, CHI Health, Nebraska Medicine and Children’s Hospital, that all use the health data.

Jeff Powell, a spokesman for the Nebraska DHHS, said in an email Thursday that the federal Medicaid programs that had funded 90% to 100% of the costs of the HIE and prescription drug program have “significantly changed” in the past year, and in some cases, have ended.

That, Powell said, has left DHHS without money to fully pay CyncHealth — it is up to an estimated $11 million short — on the $14.6 million contract that runs through the end of September. The contract includes a one-year extension through September 2023 for $18.9 million.

The agency, he said, has paid CyncHealth for the costs of the prescription drug monitoring program through July, but he said the $1 million allocated by the state for the HIE has been exceeded. Jaime Bland, CyncHealth’s president and CEO, estimated the state will owe CyncHealth nearly $11 million by the end of September.

Powell added that DHHS has pledged to seek a deficit appropriation from the State Legislature to fulfill the rest of the contract obligation.

The responses have left CyncHealth officials scratching their heads about why they aren’t being paid and scrambling to make ends meet.

Bland said her company has been forced to borrow money to keep paying its 75 workers and has been unable to pay some of its technology providers.

The lack of payments has harmed its credit rating, Bland added, and threatens whether CyncHealth can continue to provide data to health providers — providers who she said have paid their fees early to help sustain the operation.

In August, CyncHealth said health care providers looked up 637,463 records kept on the HIE. Over the past 12 months, Veterans Administration and Department of Defense facilities nationwide have reviewed 5 million records provided by the Nebraska HIE.

Bland said DHHS was aware that federal program changes were coming and that the agency could have used its state allocation to obtain matching federal funds through new programs. As it stands, she said, the Legislature won’t get to consider the deficit appropriations until January, putting CyncHealth further in the hole.

Powell acknowledged that new federal funding options are available to DHHS to pay for the electronic health information, but he said they don’t offer as much in matching funds. He added that the agency was unable, in time to be included in the current budget, to calculate how much more state funds might be needed to make up the difference.

Doctors and hospitals across the state and the country use the Health Information Exchange to track a patient’s past health records and what treatments they’ve received at other facilities.

The prescription drug monitoring program was a priority of former State Sen. Sara Howard of Omaha, whose sister died of an overdose of prescription drugs. The idea is to track how often opioids are prescribed to and purchased by patients, to stop “doctor shopping” and the ability to obtain a dangerous amount of the drugs.

The two programs are funded via a combination of state and federal funds, with some fees paid by health care providers.

State Sen. John Arch of La Vista, who chairs the Legislature’s Health and Human Services Committee, which monitors DHHS, said the agency is still trying to sort through the federal funding changes that have prompted the payment issue.

“The issues need to get resolved so there’s a steady source of funding for CyncHealth and that funding is predictable,” he added.

Arch, a former health care administrator, called the HIE a “tremendous resource” for both treatment and research that carries the potential for “moving the needle” on treatments of diseases, as well as reducing health-care costs.

Arch added that he believes that the funding issues will be worked out.

Ukrainian city of Severodonetsk now ‘completely under Russian occupation’ after months of fighting |...