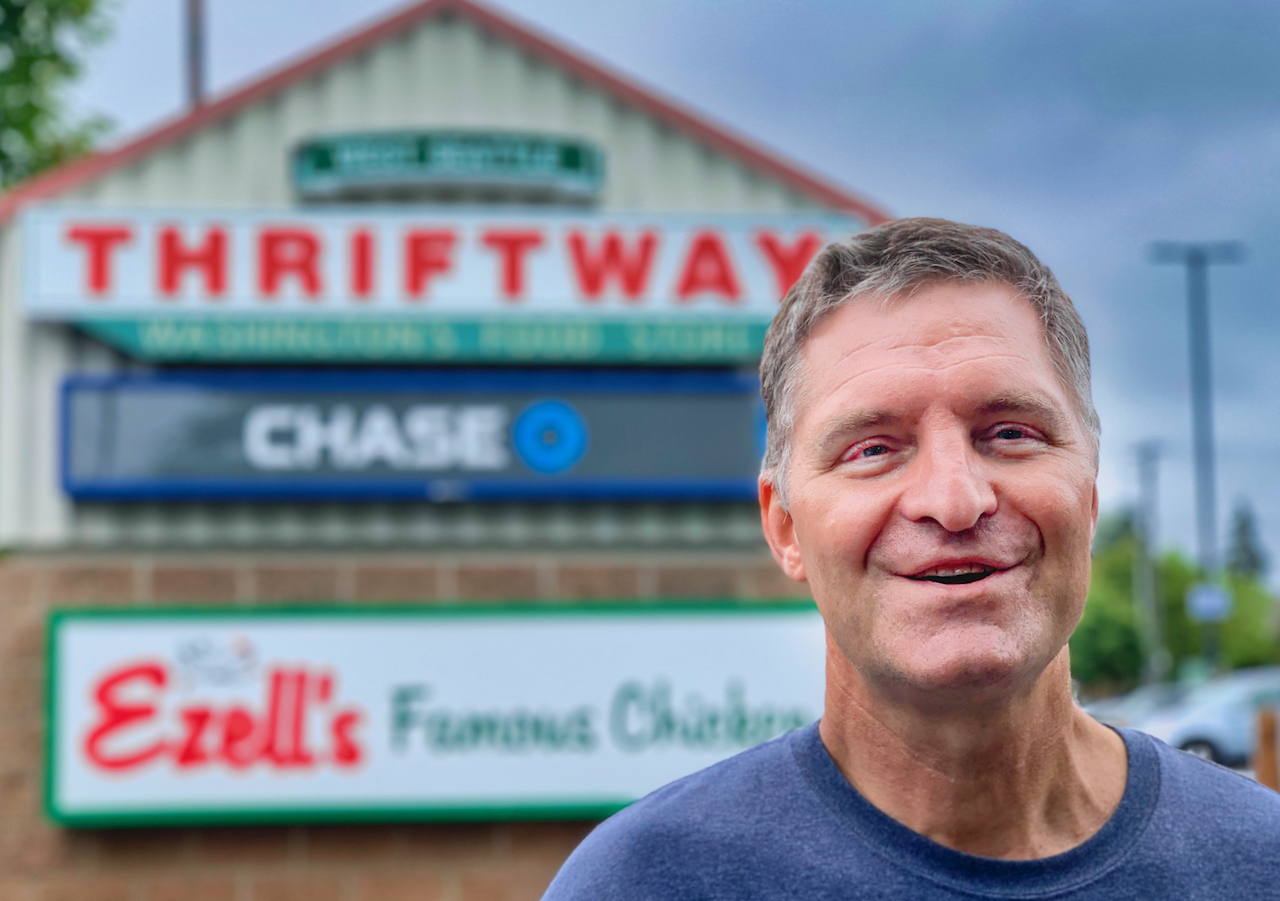 Tom Matthews, who has been for many the public face of West Seattle Thriftway for 30 years is leaving. His last day is Sept. 1 at the store where they will celebrate with a cake and party to wish him well.

When you ask Tom Matthews co-workers at West Seattle Thriftway about him they all use the same word. “Awesome.”

But that feeling about him is not just what they think, it’s the same response you will get if you ask any of the lives he’s touched in the West Seattle Community for the past thirty years.

But now Tom is leaving and moving to Palm Desert, California to live with his mother.

The store made the announcement on social media:

“It is with a mix of joy and sadness we are announcing that Tom, after over 30 years with us at West Seattle Thriftway, is retiring.

Tom graduated from West Seattle High School in 1983 and was hired here in 1989 after working several jobs around town including the Kenney Home and the famous Charlestown Cafe. After settling into his role here, he knew this would be the place he retired from one day – AND HERE IT IS! Tom is our senior Courtesy Clerk and is responsible for keeping our store clean, bagging groceries, putting up with Steve razzing him, and so much more! He will be packing up and heading down south to spend his golden years in Palm Springs. Tom is loved by many here in town and we knew you’d like us to share this exciting news!

Join us in celebrating his retirement by signing a card for him through this week and for a slice of cake the afternoon of September 1st, his last day.”

“He’s a mainstay, been here over 30 years. He’s meant a lot of fun. We get along really well and work well together. He’s a good kid,” said Andrew Haines.

Debra Thrower said, “He’s a great worker and everybody is going to miss him and we all love Tom here. It’s going to be a sad day but a happy day for him.

Tom said he’s going to miss the people in West Seattle, “especially the kids. Sometimes they draw pictures of me and bring them to the store,” he said.

He plans on working in Palm Desert but will come back to West Seattle to visit his father Joe, when he can.

Shares Pause for Breathing on Friday after a strong week; S&P 500 down...

Nueces County saves around $1M in road and drainage repairs

The study found that monkeypox mutated faster than expected