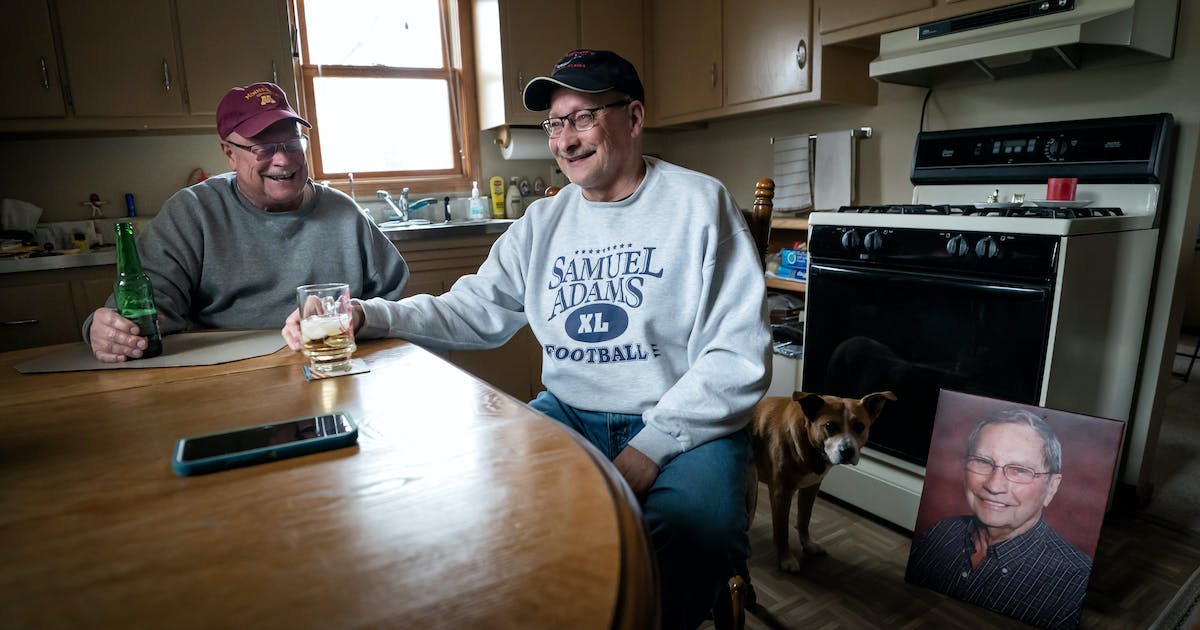 And somehow, the virus had found its way here, to a southern Minnesota farming community 10 miles from the Iowa border.

The Rev. John Henry was stumped. He had no idea how the new coronavirus — this monster people feared — had traveled so quickly from the other side of the world to his congregation.

In time would come a straightforward explanation: A Martin County woman became infected in March 2020, which, according to the county public health department, seeded an outbreak at St. James Lutheran Church in nearby Northrop. It spread quickly. Even though Minnesota at the time had the country’s lowest COVID-19 case rate, Martin County became one of America’s first rural outbreaks. By month’s end, 39 residents tested positive, and two died, including one of Henry’s congregants.

Henry is no virologist. So when he counseled parishioners about a pandemic that would kill nearly 13,000 Minnesotans and nearly a million Americans in the next two years, he stuck to what he knew. He leaned into faith and community.

“We didn’t know how the COVID story was going to go or going to end in Martin County at that time,” Henry said recently. So in an uncertain world, the congregation took comfort in spiritual certainty. There was always hope, even in dark times.

The national narrative is that the pandemic tore apart America’s already fraying social fabric. But in this southern Minnesota farming community, a different narrative has developed. Instead of division, Henry has seen a church and community strengthened. People here may disagree about vaccines and masks, but he sees opposing opinions treated with respect, negotiating differences as neighbors instead of arguing as enemies.

One explanation: In Martin County, the coronavirus quickly turned from the devil they didn’t know — some thought its prospects terrifying, others sniffed a government conspiracy — into the devil they did know. It was no longer theoretical.

“Pretty quickly, people realized this is serious — but this is survivable,” Henry said. “We knew it was real. We knew it was something you have to be careful about. But we also knew a lot of people who recovered from it. The majority of people we knew who had it had recovered within three weeks, so we knew a bunch of survivors. You learn to live with it pretty quickly.”

You’d be forgiven if you see Martin County as closer in spirit to neighboring Iowa than to Minnesota.

Martin County’s fields are filled with corn and soybeans. Some call it the Bacon Capital of the USA, because Martin County is the top hog-producing county in Minnesota, and the sixth-largest hog producer in the United States. Like Iowa, voters here skew heavily red; Donald Trump won 68% of Martin County’s votes in 2020, the 17th highest percentage in still-blue Minnesota.

Despite its early COVID outbreak, Martin County remains more vaccine-skeptical than most of Minnesota and has seen more per capita COVID cases and deaths than most Minnesota counties.

During the first two years of the pandemic, Martin County has had the 23rd-highest death rate among Minnesota’s 87 counties and the 19th-highest case rate, according to an analysis of data collected by the Minnesota Department of Health. (With a population of just 20,000, that means Martin County has seen 64 COVID deaths — though none since mid-March 2022.) More than 70% of Minnesotans have at least one dose of vaccine, but only 56% of Martin County residents have. The county ranks in the bottom third of Minnesota counties in vaccination rates.

At Cutting Edge Fitness in Fairmont, owner CJ Johnson shuttered his gym from late March until early June 2020 during the statewide lockdown. He did personal training in his home garage. For three months, the father of three brought in no income. He nearly lost his business. Even after lockdown, he estimates that less than half his clientele have returned; people broke exercise habits, or didn’t like exercising in masks, or bought a Peloton. His gym only returned to pre-pandemic numbers a few months ago. He estimates it has cost his business hundreds of thousands of dollars.

“From that first shutdown, we’ve been in the rebuilding process ever since,” he said. “Two years of figuring it out and squeaking by.”

He used to own a gym in Clear Lake, Iowa, and when Johnson looked south to the state where he grew up, he envied Iowa’s lack of restrictions. The Minnesota-Iowa border demarcated two very different pandemic approaches, and Johnson’s pandemic experience has changed his views.

“Iowa just seemed like they kept their hands out of it,” he said. “Up here, they basically had us around the neck. We couldn’t do anything.”

She returned from vacation in March 2020, and everything had changed: canceled elective surgeries, a move toward telehealth, plans being made for surge staffing and drive-through testing. At first, she wondered if it was media overreaction. Then one night, Vaske got a call: The first positive COVID test in her hospital’s emergency department.

“That’s when my heart sank: ‘Oh boy, here we go,’ ” Vaske said. “I had been thinking, ‘We gotta be ready, it’s coming.’ But at the same time, I was thinking it’s coming to Minneapolis, not necessarily to our ER.”

After the initial outbreak, COVID settled down in Martin County. Then, in September 2020, 33 infections were traced to a mask-less funeral, plus 17 more infections in church staff from the funeral. The same month saw an outbreak at Fairmont Foods, a frozen-food manufacturer. Like everywhere, the virus ebbed and flowed. Martin County’s peak came this winter, when the hospital emergency department reached double its daily average of patients.

Vaske works in Minnesota but lives in Iowa. Her pandemic reaction was the opposite of Johnson’s: She appreciated Minnesota’s more restrictive approach.

“Things weren’t as up to speed in Iowa,” she said. “It was like I lived and worked in two different worlds.”

Dr. Marie Morris, medical director at the Fairmont hospital, still can’t wrap her mind around vaccine hesitancy. Morris has COVID patients ask for ivermectin — which Morris uses to treat parasitic ringworms in her horses — then say they fear the vaccine.

“The thought processes are not scientific, are illogical,” she said. “They don’t think the vaccine is well-enough studied or proven. Umm, they’ve given over a billion doses! What do you mean? It probably got tested and proven more rapidly than any vaccine in history, don’t you think?”

Eugene Borchardt was a hale 88 years old when he got sick in March 2020. Just a cold, he told his sons. By the time Doug drove his dad to the Fairmont hospital March 19, his oxygen levels had plummeted. Doctors intubated him to assist his breathing, then sent him by ambulance to the bigger Mayo hospital in Mankato. Eugene died eight days later.

Doug started feeling sick soon after. One of his brothers, Rick, took him to the hospital April 3. “I felt like a leper,” Doug said — nurses in full personal protective equipment, weeks of quarantine after his April 7 release.

Doug’s dad was a chaplain for the local American Legion and did more than 500 funerals. The family wanted the full military honors he deserved, but he couldn’t get that at his burial — only at a proper memorial service in August 2021.

Doug and Rick Borchardt miss their dad, a jovial tire salesman who held the family together. They miss their weekly happy hours. They miss his weekly e-mails full of musings — “Sunday Afternoons with Gene.” They miss men’s night out at local restaurants.

They know that at 88, his time was limited. But losing their dad at the beginning of such a trying time made it, somehow, worse.

Doug’s COVID has lingered: brain fog, fatigue and insomnia. Doug has heard plenty of conspiracy theories from unvaccinated friends. He tells them about his COVID battle, but he doesn’t press the issue. He’s vaccinated and twice boosted: “I got so sick, getting the vaccine was a no-brainer,” he said. “My organs were starting to shut down.”

“There’s a lot of polar viewpoints in our community, as there is in every community,” said Chera Sevcik, executive director for health and human services of Martin and Fari­bault counties. “It was hard for community leaders. They were getting it from all different angles. Did we overreact in 2020? We did the best we could with the information we had.”

Sipping bloody marys one recent morning at Doug’s kitchen table, both Doug and Rick said they respected friends who were anti-vaccine or anti-masking. This is, in a way, a tribute to their father: A friend to everyone, who schmoozed for a half hour after church, and who kept his middle-of-the-road political views to himself.

“They don’t want to be told what to do,” Rick said.

“Government control is a big thing,” Doug said. “They got their opinion, and I’m not going to force my opinion on them.”

“You shouldn’t be, like, ‘You got a stupid opinion, you’re not my friend,'” Rick said. “That’s the way the world should be: Respect everybody’s opinion.”

Dodgers give final tuneup to Julio Urias vs. Rockies

Carvana, Bristol-Myers Squibb, Alphatec and others

Dodgers give final tuneup to Julio Urias vs. Rockies