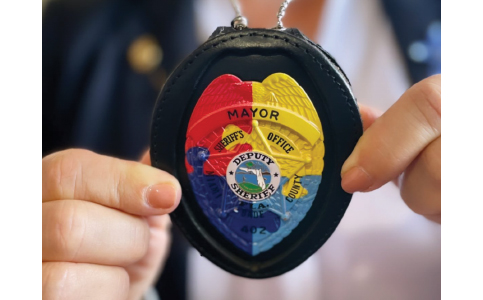 Written by Gabriela Henriquez Stoikow  on May 3, 2022

In a special meeting set to discuss the functions and powers of the constitutional officers to be elected in 2024, Miami-Dade County commissioners are to discuss today (5/5) over a dozen resolutions defining what remains within the purview of the county and what would pass to the elected officials.

For the county sheriff, a constitutional officer of interest to many, five resolutions could shape the functions and responsibilities of the officer to be elected in November 2024 and take office in 2025.

A first resolution by Chairman Jose “Pepe” Diaz proposes that the Miami-Dade Police Department continue to providing police patrol services in the unincorporated areas of the county and at county assets including the airports, PortMiami, and Miami-Dade County transit facilities. Under this proposal, the functions of the police would not be transferred to the sheriff.

Chairman Diaz’s resolution echoes a memorandum released by Mayor Daniella Levine Cava in April with the same provisions, including budgetary and operational actions needed to prepare for the transition.

A resolution by Raquel Regalado similarly proposes that all municipal law enforcement powers, duties, and functions currently performed by the county’s police department continue to be performed in the unincorporated areas by the police unless exclusively assigned to the constitutional office of sheriff by law.

The document says that the budgeted positions, classifications, and employees who agree to transfer from the police and all real property, assets, equipment, contracts, grants, and licenses currently used by the Police Department to perform functions exclusively assigned to the constitutional office of sheriff should be offered to the County Sheriff’s Office once the office is reestablished.

A resolution by Commissioner Joe A. Martinez, a retired police lieutenant and possible candidate for the position of sheriff once he is term-limited out of the county commission, proposes that all the municipal and other functions of the police department be moved under the purview of the county sheriff – including the policing services for unincorporated areas.

The document further proposes that employees who agree to the transfer, and the property, assets, contracts, grants, and licenses currently used by the county police be transferred by agreement to the County Sheriff’s Office with its reestablishment on Jan. 7, 2025.

When asked by Miami Today on Tuesday why it is best for the county to transfer the police functions to the sheriff, Commissioner Martinez said that it is the least expensive for county taxpayers and added that keeping the sheriff and the police department separately would duplicate functions and costs. “You’re going to have to pay double, and that’s either increase taxes or reduce services.”

Among costs associated with creating the Sheriff’s Office are changing the color of uniforms, cars, and badges of police officers, and creating a headquarters for the sheriff. Most importantly, the sheriff would have to hire new staff, which would have a financial impact on its budget and the county.

“The sheriff may want new people who make $40,000 a year instead of people making $100,000 a year, so what if the sheriff doesn’t take anybody? You [the county] still keep them or you’re going to lay them off,” Mr. Martinez said.

Both proposals by commissioners Martinez and Regalado request the mayor a report with an inventory listing all real property, assets, equipment, contracts, grants, and licenses currently used by the police department and all budgeted positions and employees of the police.

A resolution by Commissioner Sally Heyman proposes that the county employees, real property, assets, equipment, contracts, grants, and licenses used by the County Medical Examiner be excluded from any transfer agreements with the newly re-established office of the sheriff.

A second document by Commissioner Heyman proposes that the mayor’s administration exclude all bailiffs or bailiff functions from any draft transfer agreements prepared for the reestablished Sheriff’s Office.

“The sheriff has a duty to protect the courts,” Mr. Martinez said. “What if the sheriff comes in and says, I will have a deputy in each corner? It has to be paid. You’re going to have a bailiff and a sheriff.”

What to expect at Apple’s ‘far out’ iPhone 14 event

Orioles get off to fast start in rout of Red Sox