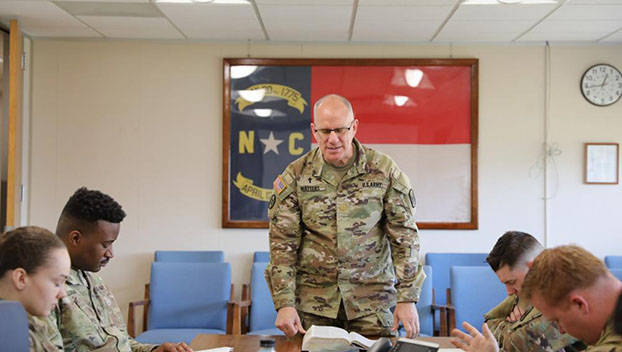 MORRISVILLE, N.C. – In honor of Mental Health Awareness Month, the 449th Combat Aviation Brigade calls attention to two Soldiers who help keep their fellow battle buddies mentally and spiritually resilient. North Carolina Army National Guardsmen Chaplain (Maj.) James Watters, the 449th CAB chaplain, and Staff Sgt. Jarvis Williams, the 449th CAB religious affairs specialist, both have vital roles pertaining to brigade readiness as a part of the Unit Ministry Team.
“We are experts on religion and ethics,” said Williams. “Our job is to ask, what is the religious affairs component and how do we support Soldiers and their family members?”
As leaders within the Chaplain Corps, Watters and Williams provide support at the brigade level through counseling, advocacy, religious and moral support, resiliency training and support, suicide prevention training, tracking morale and welfare, as well as other religious and non-religious services.
The UMT works to maintain the 449th CAB as a religiously inclusive organization that promotes unity and equality regardless of religious preference.
“Religious freedom is a constitutional right, especially for those who protect those freedoms,” said Watters. “Chaplains help advocate for Soldiers’ religious freedoms and rights.”

James “Shad” Watters is a Washington native. He pastored at Covenant Community Church on Highway 17 N for 16 years and now teaches ESL (English as a Second Language) for Eastern Elementary and Bath Elementary. James and his wife, Kim, have five children and three grandchildren.

Religion is a key component pertaining to the Chaplain Corps; however, its purpose provides a much broader scope in order to reach all Soldiers within the Army.
“We also deal with Soldiers that don’t have a religious preference because they too are individuals that must cope with adversity,” said Williams.
Whether Soldiers are struggling at home or in uniform, the UMT is ready to provide services to assist in any way they are able.
“One of our most important roles is performing or providing counseling for any Soldier that needs it,” said Watters. “If for some reason we can’t meet the need, we refer to a resource that can.”
The duties of a Soldier are complex and can be very challenging at times. Therefore, it is important that Soldiers are equipped with the tools and support to overcome any mental, emotional, or physical hardships they may encounter along the way.
“It is important to de-stigmatize mental health issues,” said Watters. “Everyone, including military personnel, has a breaking point. We need to work through these inevitable issues as a team.”
Watters provides an essential argument that mental health is something men and women of all ages in uniform struggle with every day. Without support or awareness, the aftermath can be tragic, affecting the entire brigade. The UMT helps to reinforce the ideology that every Soldier has an essential duty to help identify and prevent suicide within the ranks.
Following years of data collection and reports from the Chaplain Corps, key Army-wide trends were identified on various issues aimed to help prevent suicide and increase resiliency. As a result, the Army Strong Bonds program was developed as a collaborative effort to reach out and proactively support Soldiers and their families. This program is run by Army chaplains and specifically aids service members’ relationships, builds coping mechanisms, and resiliency. The Army Strong Bonds program has allowed chaplains Army-wide to assist fellow service members in more effective ways.
“Decades later we see a tangible impact in trends of how this one program has helped throughout the Chaplain Corps,” said Williams.
Watters and Williams are leaders within the 449th Combat Aviation Brigade and the NCARNG who are at the forefront of protecting religious freedom and supporting Soldiers within the ranks.
“It is a privilege, and it fulfills me in a special way,” said Watters. “I truly feel that it is a significant part of my ministry and calling to care for Soldiers and their families.”

She welcomes a girl with a husband – Hollywood life

This September, usually the worst month for stocks, could buck the trend