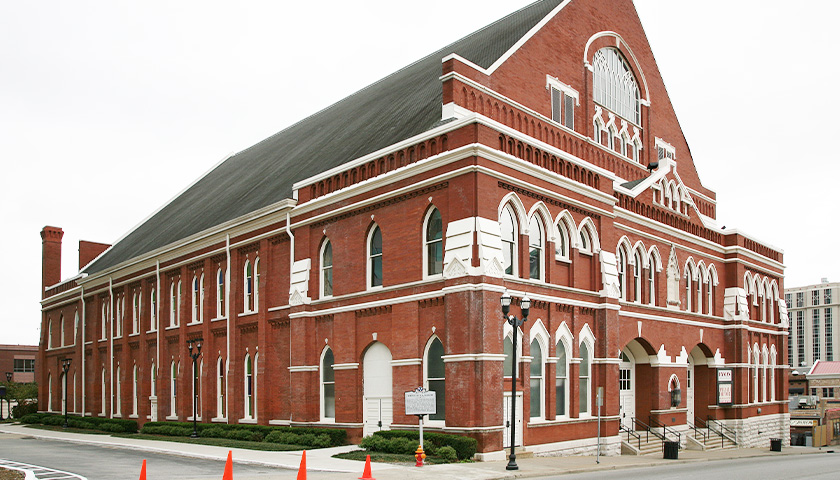 Metro Nashville Council passed a resolution recognizing the Ryman Auditorium at its most recent meeting.

Council additionally considered issues dealing with contracts, grants, and zoning, as well as a resolution recognizing the Ryman Auditorium.

RS2022-1514, which passed easily, is a “resolution recognizing the Ryman Auditorium – “The Mother Church of Country Music” – and its 130 years as Music City’s most famous and respected concert venue.

It was sponsored by Councilmembers Freddie O’Connell and Emily Benedict.

The resolution read in part:

NOW, THEREFORE, BE IT RESOLVED BY THE COUNCIL OF THE METROPOLITAN GOVERNMENT OF NASHVILLE AND DAVISON COUNTY:

Section 1. The Metropolitan Council hereby goes on record as recognizing the Ryman Auditorium, “The Mother Church of Country Music,” and its 130 years in Nashville as Music City’s most famous and respected music venue, attracting hundreds of thousands of visitors to Nashville each year.

Section 2. The Metropolitan Council Office is directed to prepare a copy of this Resolution to be presented to Gary Levy, General Manager of Ryman Auditorium.

Section 3. This Resolution shall take effect from and after its adoption, the welfare of the Metropolitan Government of Nashville and Davidson Country requiring it.

RS2022-1506, which was sponsored by Councilmembers Sean Parker, Ginny Welsch, and Benedict is a “resolution authorizing grants not exceeding $1,775,080.27 from the Barnes Fund for Affordable Housing to certain nonprofit organizations selected for the express purpose of constructing and rehabilitating affordable or workforce housing.”

It was approved without controversy.

Organizations that are scheduled to receive grants under this resolution are:

BL2022-1234 proposes “to provide for the designation of public property within specified areas of downtown Nashville as a temporary “Special Event Zone” during the time period beginning at nine o’clock (9:00) p.m. on July 2, 2022, and ending at eleven fifty-nine (11:59) p.m. on July 5, 2022, relative to the use of these areas in conjunction with the 2022 July 4th Celebration and related activities and events.”

The ordinance is sponsored by O’Connell and will proceed onto its second reading.

BL2022-1171, an ordinance on third reading, proposes “to provide for the designation of public property within specified areas of downtown Nashville as a temporary “Special Event Zone” during the time period beginning at six o’clock (6:00) a.m. on June 8, 2022, and ending at midnight (12:00) on June 13, 2022, relative to the use of these areas in conjunction with the 2022 CMA Fest and related activities and events.”

It was sponsored by Councilmember Connell and approved without controversy.

The vast majority of issues considered by Council at the most recent meeting were noncontroversial. The first budget meeting is scheduled for May 17 and that is likely to generate some heated discussion.

The NHS is in seriously poor condition

Man shot near Hinckley, brought to hospital by suspected gunman and dies there

19 Best Sunflower Fields in Florida You Should Visit