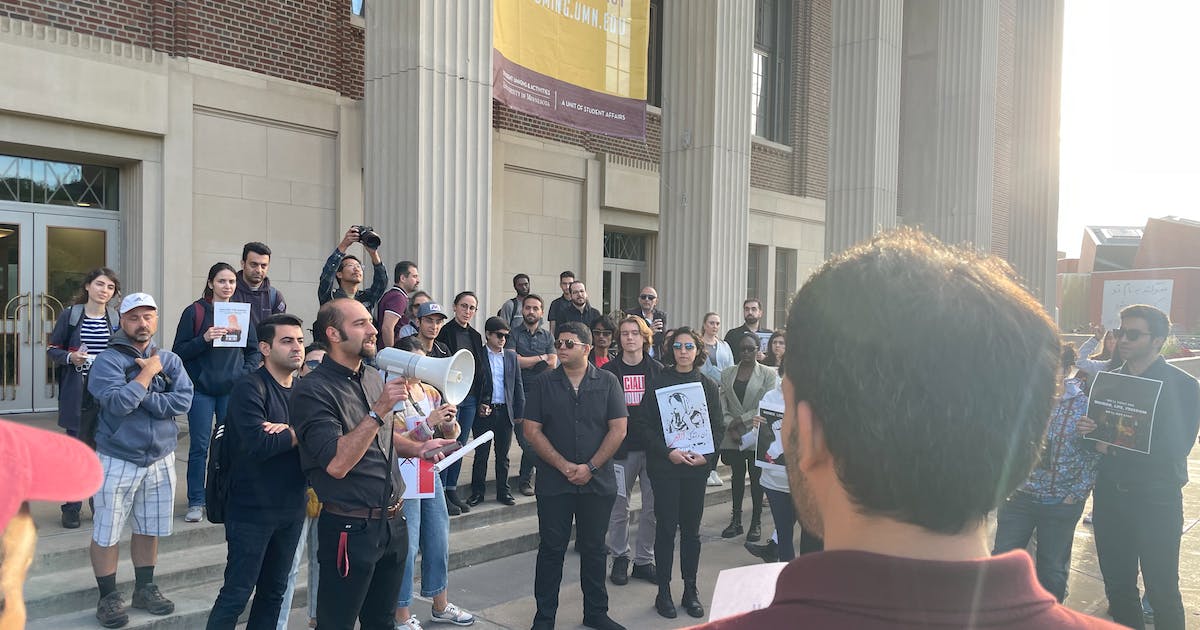 A crowd of demonstrators at the University of Minnesota mounted a show of solidarity Thursday with people rising up in Iran after the death of a woman in police custody.

“We are all worried about our families,” said Faraz Samavat, an international third-year graduate student from Iran pursuing a master’s degree in physics. “But we know at the end of the day a blood price has to be made for there to be change.”

Mahsa Amini died after she allegedly broke the country’s strict dress code, sparking protests across the Middle Eastern nation. At least nine people have died in clashes with police, according to the Associated Press.

About 100 people joined the group gathered outside Coffman Memorial Union on Thursday, chanting chants “say her name Mahsa Amini,” holding red and white flowers and displaying signs. One read: “You will not die. Your name will be a symbol.”

Several demonstrators from Iran described fear for their families, especially after the government shut down the internet on Wednesday in an attempt to quell the unrest. A few declined to give their full names for what they described as fear of political retribution when they return to their home country.

“We live in the U.S. and we don’t have contact with our families and it makes us very scared because we don’t know what the government is going to do with them,” said Bahar, a 25-year-old demonstrator. “We are here to tell the world that something is happening in Iran.”

Showing solidarity with their people will spread their message to the rest of the world, said Zahra, 32, in Minnesota on an internship. She also declined to give her last name for fear of what could happen to her when she returns to Iran.

“We want people from other nations to know and hear our voices especially right now because the (Iranian) president is at the United Nations,” Zahra said. She said she hopes the issue will be further discussed at the international organization.

Any Iranian who is connected to protests against the government has good reason to be afraid, Samavat said. But he said he was proud of his family and friends for rising up to protest the atrocity.

“It’s difficult for us to hear about one of our country people dying at the hands of police,” he said, “but also honorable to hear people are rising up and going against the regime even though they have no weapons.”

Tracking the Tropics: What to expect in July