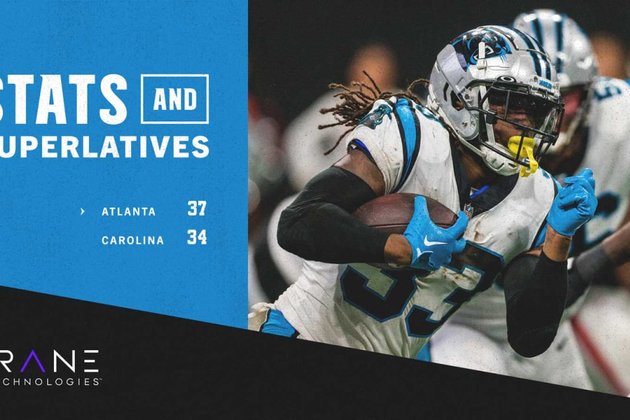 The Panthers scored 34 points in Sunday’s overtime loss to the Falcons, tied for their most points since they put up 37 points against the Buccaneers in London during the 2019 season.Carolina rushed for 169 yards one week after piling up 173 against the Bucs. The 342 combined rushing yards are third-most in the NFL in Weeks 7-8 through the early afternoon games.PJ Walker’s 62-yard touchdown pass to DJ Moore with 12 seconds left in regulation was just the fifth TD of 60-plus yards in the final 30 seconds of regulation since NFL stats were made available in 2000.The Panthers’ 478 total yards were their most since Week 10 of 2017 against Miami (548), while their 309 passing yards were their most since Week 9 of 2020 at Kansas City (331).The Falcons rushed for 167 yards, the second most the Panthers have allowed this year. They’re 0-15 over the last two seasons when allowing at least 100 rushing yards.The Panthers were flagged for a season-high nine penalties.This was the Panthers’ 18th overtime regular season game all-time. They’re now 5-12-1 in overtime, including 0-4 in Atlanta.

D’Onta Foreman rushed for 118 yards and three touchdowns, becoming the fourth player in Panthers history, and first since 2004, with 110-plus rushing yards and three rushing TDs in a single game.Walker threw for a career-high 317 yards with a touchdown and an interception. Those 317 yards were the most for a Panthers quarterback since Teddy Bridgewater threw for 367 in a loss to the Bucs in Week 2 of the 2020 season.Moore had 152 receiving yards, the second-most of his career behind a 157-yard game in Detroit in Week 11 of the 2018 season. Since 2018, Moore has 11 receptions of 50-plus yards, tied with Philadelphia’s A.J. Brown for most in the NFL. Three of those catches have come in Mercedes-Benz Stadium, more than any other player in the past five seasons.Derrick Brown racked up a career-high 12 tackles, including a tackle for loss and a half-sack. It was the most tackles by a Panthers defensive lineman since stats were available in 2000. His 40 tackles this season are tied for second-most among the league’s defensive linemen.Donte Jackson grabbed an interception on the first drive of the game, his 14th career pick. That ties Jackson with Richard Marshall and Doug Evans for fifth most in franchise history.Frankie Luvu had a sack and two tackles for loss, while Brian Burns added seven tackles. Burns and Luvu have combined for 15 tackles for loss this season, the second-most by any pair of teammates in the NFL (Minnesota’s Za’Darius Smith and Danielle Hunter – 20).CJ Henderson had an interception and a 54-yard return in overtime. It was his first interception since his rookie debut with Jacksonville in Week 1 of 2020.

3 dead, including suspect, after shooting outside Cornerstone Church, a megachurch on the outskirts...