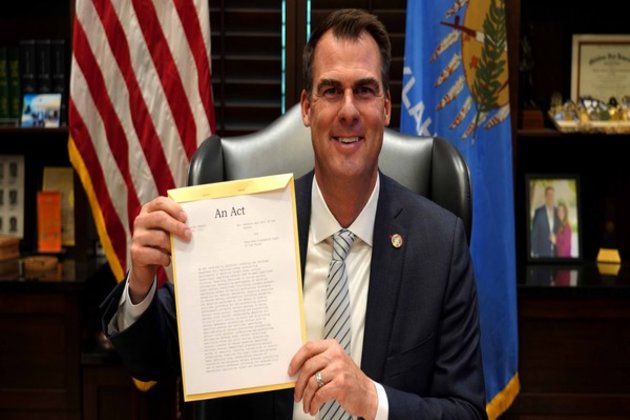 Oklahoma [US], May 4 (ANI): Amid the leaked draft opinion of the Supreme Court to overturn the Roe vs Wade judgment that gave individual abortion rights, Oklahoma Governor Kevin Stitt on Tuesday signed a controversial bill, modelled after the Texas rule, banning abortion beyond six weeks of pregnancy into law.

Slated to take effect this summer, 90 days after the legislative session ends, the law would punish health care providers who perform an abortion with up to 10 years in prison and up to USD 100,000 in fines. It makes an exception only in the case of a threat to the life of the mother.

This comes amid protests in the US after the apparent leak of a US Supreme Court order overturning a ruling on abortion rights which the court said is authentic but does not represent the high court’s final decision.

Oklahoma is only the latest among Republican legislatures that have appeared to move with haste to pass a wave of contentious legislation, reported US News.

After signing the bill, Stitt tweeted, “I am proud to sign SB 1503, the Oklahoma Heartbeat Act into law. I want Oklahoma to be the most pro-life state in the country because I represent all four million Oklahomans who overwhelmingly want to protect the unborn.”Oklahoma joins Texas in banning abortion once a fetal heartbeat is detected, which can occur as early as six weeks of pregnancy. Since the Texas law banning abortions came into effect, Oklahoma’s abortion landscape has changed.

According to a recent study from the University of Texas at Austin, Oklahoma has since been inundated with patients from Texas seeking abortions. Oklahoma has provided around 45 per cent of all abortions for Texans who have travelled across state lines to evade the new restrictions, as per the media outlet.

The Oklahoma Governor said that this new legislation will curb the trend. However, this restriction is in variance with Roe vs Wade verdict.

The US Supreme Court voted to strike down the landmark Roe v. Wade verdict that guaranteed the right to abortion for nearly a half-century and allow each state to decide whether to restrict or ban abortion, reported New York Times, citing a leaked draft opinion from February, published online on Monday night by Politico, the US-based media publication.

The law, pioneered by Texas, deputizes private citizens to enforce its restrictions and has proven difficult to challenge in court.

A protest was seen in front of the Supreme Court building in Washington DC late Monday night. Barricades were up around the building, just minutes after reports from Politico were leaked regarding the court overturning Roe v. Wade ruling.

According to the draft opinion, written by Justice Samuel A Alito Jr, a majority of the court voted to overturn the landmark Roe v. Wade verdict. Further, Justice Alito called it had wrongly been decided and said the contentious issue, which has invoked political debates in the US for more than a generation, should be decided by politicians, not the courts.

Though the court’s holding will not be final until it is published, likely in the next two months, the ruling according to the draft would be a seismic change in American law and politics, coming a few months ahead of the congressional midterm elections that will decide who controls power on Capitol Hill. (ANI)

Testing positive and using the ‘backdoor’ to get into the U.S.

Over $100M worth of Binance’s BNB token stolen in another major...

German company Hugo & Imaginary Ones is releasing an exclusive NFT...