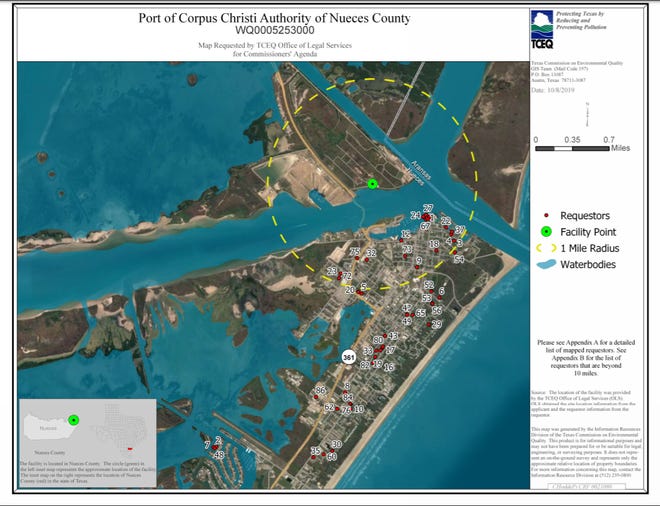 The Port of Corpus Christi is seeking to clarify its plans for its Harbor Island seawater desalination project, reacting to Corpus Christi leaders last month accusing the port of being nebulous about its intentions.

Port commissioners met Monday in a specially called meeting to discuss a resolution outlining their plans with the port’s permit applications to the Texas Commission on Environmental Quality, which could allow the construction of desalination facilities on Harbor Island and/or the La Quinta Channel.

The City of Corpus Christi, which is the regional water supplier to seven counties and nearly 500,000 residents, has submitted two permit applications for desalination facilities at the ​​​​Inner Harbor of the Corpus Christi Ship Channel and La Quinta Channel.

Leaders of both entities agree desalination is needed to address concerns with droughts and better accommodate future population growth in the region, which could put a strain on water supplies. Future outages in water could affect residents and local industry.

City officials aired concerns about the port’s actions last week, worrying that the port building a desalination plant could conflict with the city’s Inner Harbor project and impact their business model as the primary water producer and distributor in the region.

On April 19, during the monthly port commissioners’ meeting, the authoruy passed a resolution stating the port had no intention of owning or operating a desalination plant ending all attempts to become a water producer or distributor.

The three-page resolution considered by port commissioners on Monday detailed a possible solution wherein the city, port and a qualified developer/operator enter a public-private agreement to operate a desalination facility on Harbor Island.

In this scenario, the city either does not get its permits approved or decides to instead pursue the Harbor Island location (assuming the port is given the green light from TCEQ on that project). This scenario also sees the city and port pool funds in combination with investments from the third party to establish the facility.

The resolution states Corpus Christi would be the primary customer of this facility.

A lot of questions remain about this plan, as city officials have said they are not in favor of a desalination plant at the Harbor Island and none of the permits have been granted to either the city or port.

“There are so many ‘ifs’ here,” said city-appointed commissioner David Engel. “In the meantime, we are going to support (the city’s) efforts for a permit in the Inner Harbor and the La Quinta Channel.”

The dispute between the entries captured headlines after city officials discovered the port authority completed the first step in applying for a $495-million loan from the Texas Water Development Board for its Harbor Island desalination project — a move city officials said they knew nothing about.

The city’s Inner Harbor project has already been awarded a $222.5 million loan from the Texas Water Development Board in 2020.

Responding to city officials’ requests to the port to cease all attempts to become a water producer or distributor, that application has been rescinded, as it was “procedural in nature” and done without the approval or knowledge of city-appointed port commissioners Rajan Ahuja and Gabe Guerra, they told city council last week.

Guerra said he needed to see more financial modeling to determine if the Harbor Island facility is viable — a concern he shares with city officials — to vote yes.

Conversely, Chief Executive Officer Sean Strawbridge said it was the port’s position the Harbor Island location would be the best for a “long term, scalable” solution for seawater desalination.

Hoskins expressed concern about the deteriorating relationship between the port and the city.

“We don’t have a customer or even hopes of having a customer for water. Therefore, I don’t know how we are going to move forward in any form or fashion until we at least get back in good graces with our intergovernmental folks,” Hoskins said. “I really feel like we have boxed ourselves in and created enemies.”

More:Here’s what to know about permits for proposed Corpus Christi desalination plants

Ahuja said there has been a “breakdown in communication” between the port and the city, saying work on behalf of the port for destination projects should be “put on the back burner until the permits are announced.”

Nueces County-appointed commissioner Bryan Gulley estimated the port has spent at least $4 million pursuing the Harbor Island permit over the last five years. Should the city get its permits, he said the port should at least put its permit “on a shelf” and keep it as a possible alternative source of water should more industry come into the region.

“It would be the worst business decision of all time to stop right now and let this all go to waste,” he said.

The need for a reliable and continuous water source is in high demand by industry leaders in the region. On April 28, industry representatives of the region’s “Large Volume Water Users” sent a letter commending Strawbridge and City Manager Peter Zanoni for their desalination efforts. Strawbridge read the letter into the record during the Monday meeting.

Strawbridge said the port’s Harbor Island permit could be granted either this month or next.

In February 2021, the state judges recommended the application be denied based on potential impacts of discharging brine into the bay system. A few months later, TCEQ board members remanded the case back to SOAH.

Chase Rogers covers local government and industry in South Texas. Contact him at chase.rogers@caller.com or on Twitter @chasedrogers. You can support local journalism with a subscription to the Caller-Times.