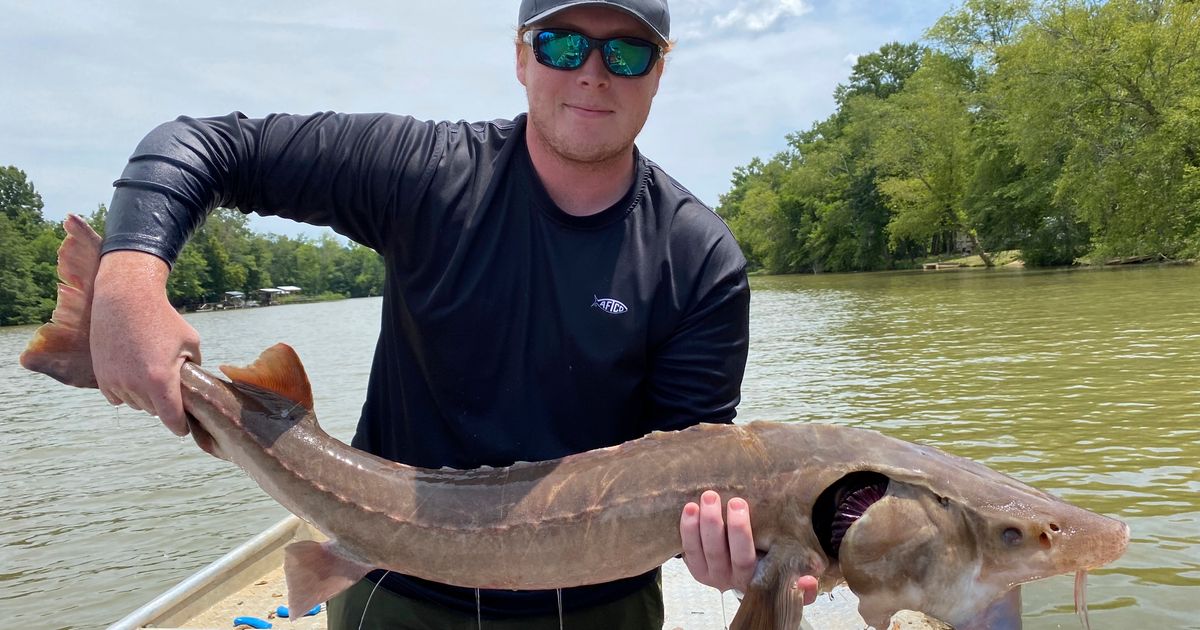 Scientists and students embarking on a census of Georgia lake sturgeon have found three females with mature eggs — an indication the armored “living fossils” may be reproducing in that state for the first time in a half-century.

“It’s exciting because it’s confirmation that they are becoming mature and trying to spawn,” Martin J. Hamel, an associate professor at the University of Georgia Warnell School of Forestry and Natural Resources, said in a recent news release.

Fossils indicate that the spade-nosed fish with a bottom-mounted vacuum hose instead of jaws has existed for more than 136 million years, according to scientists.

One of nine sturgeon species and subpecies found in the U.S., lake sturgeon live in 18 states and five Canadian provinces in the St. Lawrence, Hudson Bay, Great Lakes and Mississippi River watersheds, according to the U.S. Fish and Wildlife Service.

Pollution, habitat destruction and harvesting for flesh and caviar have so diminished their numbers that the U.S. Fish and Wildlife Service is considering federal protection for the species.

Sturgeons’ bone-plated bodies did so much damage to fishing nets that commercial fishers hauled large numbers out in the 1800s and left them on river and lake banks, the Minnesota Department of Natural Resources recounts on its website.

Dams, which keep the big fish from migrating from lakes to the rivers where they spawn, also reduced their numbers. Now lake sturgeon are at less than 1% of historic levels.

State protections, such as fishing limits, and stocking programs, some run by Native American tribes, have helped sturgeon.

By the 1970s, lake sturgeon had been wiped out of northwest Georgia’s Coosa River basin — the only place where they were found in Georgia.

The state Department of Natural Resources began reintroducing lake sturgeon 20 years ago, after the Clean Water Act cleaned up the river, Hamel said.

Females take 20 to 25 years to mature and produce the black, glistening eggs that people love to eat, according to Michigan Sea Grant. So until such eggs turned up this year in females being implanted with radio telemetry tags to track their movement, nobody knew if Georgia’s sturgeon were surviving long enough to reproduce.

“Because lake sturgeon take a long time to mature and then reproduce intermittently — every two to three years — we really need a robust population of varying size and age classes,” Hamel said.

The current population assessment is the largest since Georgia first collected eggs from fish in Wisconsin, raised them in a hatchery and released them into the Coosa in 2002. State natural resources staff, working with their Wisconsin counterparts, have done so nearly every year since.

“It’s a big investment because you don’t even know if the stocked fish are going to survive, let alone grow up and reproduce,” Hamel said.

“While that seems like a lot of sturgeon, the survival rate of fish that are released at that size is likely between 1-10%,” he wrote.

The students are catching as many lake sturgeon as they can to estimate population size, survival and growth rates. The project started in the spring. It will run through this summer and next spring and summer, finishing in winter 2023, Hamel wrote.

Radio telemetry tags will give a better picture of where in the river basin sturgeon tend to live.

“We have implanted 28 fish with telemetry tags thus far, and plan to implant 12 more in the coming months,” Hamel wrote.

Scientists have implanted tiny PIT tags, like the ones used to identify pets, in hundreds of fish over the past two decades. The tags let researchers learn when and where scientists caught the fish previously.

Hamel said about 15% to 20% of the fish being caught have PIT tags, and one is going into every untagged fish.

Five adults and five juveniles will also get a tag that records depth and temperature every 10 seconds, he said.

Information from the first three years of restocking suggested that juveniles were surviving.

“There’s been a lot of questions about long-term survival, growth rates, and when these fish would become sexually mature — and we’re on the verge of determining if these fish are going to successfully reproduce,” Hamel said.

The oldest lake sturgeon on record was 152 years old, according to the Fish and Wildlife Service. The agency says the fish can reach up to 9 feet (2.7 meters) long and 310 pounds (140 kilograms).

The largest caught so far by the Georgia group was 52 inches (1.3 meters) long and weighed 24 pounds (11 kilograms).

“This is the largest fish that anyone has documented on the Coosa River,” Hamel wrote.

Follow AP coverage of climate and the environment at https://apnews.com/hub/climate.

Edwards vetoes bill that would allow state board to approve charters