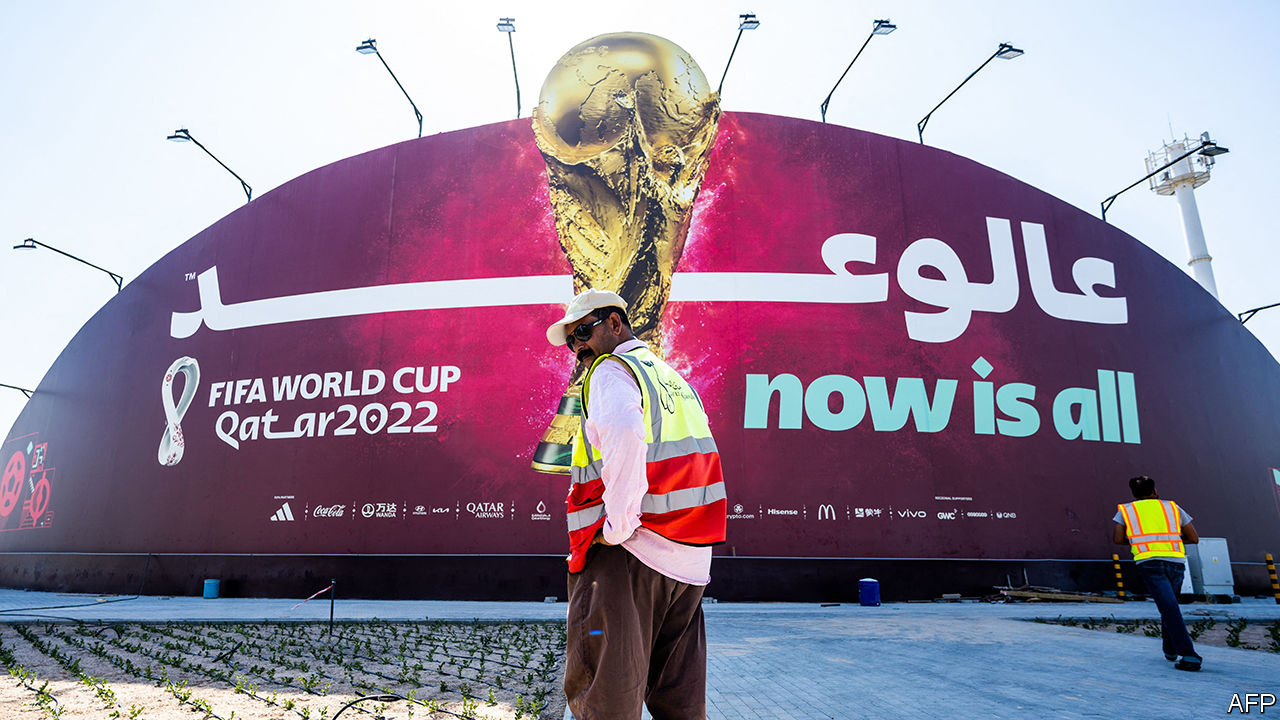 THERE no traffic on the tree-lined ten-lane highway from Doha, the capital. It seems big enough to fit into any car in Qatar. As drivers glide north, they pass Lusail Stadium, an 80,000-seat bowl that will host the final of the World Cup in December. It takes only 20 minutes to reach the Al-Bayt Stadium, where the semi-finals will be held. Qatar’s promise to host a uniquely compact World Cup has been delivered: soccer fans should have no problem watching more than one match a day.

His efforts look less impressive when he turns onto a narrow road shortly after Al Bait Stadium. At the end is the “fan village” of Al Khor, which promises hundreds of guests a “pleasant and luxurious stay” with a swimming pool and restaurant. Room rates start at 1,512 riyals ($415) per night.

On a visit in late October, the site looked neither pleasant nor luxurious—nor finished. The land was cultivated by bulldozers. Giant spools of cable sat around the perimeter. Set amid expanses of sun-scorched dirt, it looked less like a luxury resort than the kind of desert camp where Arab regimes like to put dissidents.

The trip to Al Khor is a microcosm of Qatar’s preparations for the World Cup. First, the good news. A large infrastructure is ready. All eight stadiums are made and creatively designed. Al Bait resembles a nomad’s tent, while the ‘974 Stadium’ is a striking structure made from 974 recycled shipping containers (the number is Qatar’s international telephone code).

Many new roads have been built. A new $36 billion subway will transport fans around the city (for free). Doha’s main airport, one of the best in the world, has been prepared for the tournament and the old airfield has reopened to cope with the overflow. According to some estimates, the cost of all this is about 300 billion dollars.

There are also less noticeable changes. Reforms to the hated kafala The (sponsorship) system means that most migrant workers can change jobs or leave Qatar without their employer’s permission. The International Labor Organization estimates that the new minimum wage of 1,000 riyals has given 400,000 workers a raise. Horror stories still abound: unpaid wages, exorbitant hiring fees. But even many of Qatar’s critics admit that the World Cup forced it to make real reforms.

So far so good. But the fans have to sleep somewhere. Qatar sold 2 million room nights in everything from five-star hotels to tented camps. Earlier this month, it added another 30,000 rooms (or roughly 1 million rooms) for last-minute bookings. Omar al-Jabbar, the official in charge of accommodation, was keen to show off a traditional dhow that would serve as a floating apartment. It looked nice, with plush bedding and a hot tub on the top deck (and an interesting amount of ashtrays scattered about). But only 30 dhows are available, the largest of which holds ten people. Many more fans will find themselves at places like Barwa Barahat al-Janoub, which offers rooms for 300 riyals a night. Mr. Jabbar says he will host 10,000 guests. “Heavy construction is all done. They put up beds, check the water,” he says. “But we can say it’s 99% done.”

If so, I wonder what it looked like at 98%. Some roads in the neighborhood are still unpaved. The booking website describes it as “inspired by traditional Arab houses built around courtyards”. No mention is made that the site is ten kilometers (six miles) from the nearest metro station; officials promise minibuses. There are no restaurants or shops within a few kilometers, but if the fans are really picky, there is a slaughterhouse across the street.

Officials assure that they did not promise anything: “Everything is ready on our portal, everything is ready. We only download what [are] ready,” says Mr. Jabbar. And a lot can change before the start of the tournament on November 20. Workers work around the clock. However, many places to live do not seem to be ready at the moment.

Another fan village is located in the free zone near the port. Renderings show grassy walkways between colorful cabins. When your correspondent visited, it was under construction. The dirt tracks were littered with pallets, boxes and barrels; excavators were digging trenches. The only greenery in sight are piles of rolled up sedges.

Fans will be able to buy beer outside the stadiums, but only non-alcoholic beer inside. This is not unusual (many European countries have similar rules). Away from the stadiums, they will be able to drink in the best hotels and in “designated places”; the organizers are sly about where it is.

It may take patience to eat. At the restaurants in Souq Waqif, a popular tourist market, nearly every table was full on a recent Thursday night. It was the same in the bars of West Bay, an area full of high-end hotels and greasy spoons in the old part of Doha. Waited 30 minutes for one barbecue.

All this worries fans and local residents. Some Qataris are excited about the tournament. Others fear that the traffic will be unbearable, the restaurants will be overcrowded and the streets will be filled with drunken hooligans. Schools will be closed for a month; parents wonder how they will entertain their children. Some plan to spend a month abroad.

Quietly, some also wonder if it was all worth it. Qatar claims it would have built much of this brilliant infrastructure anyway as part of its national development plan. But this is a Potemkin feeling. The highways seem too big for a country only 3 meters high. In trendy new malls, the cashiers are bored and there are few customers. Perhaps a good tournament makes Qatar a prime destination for tourism and big events. If that doesn’t happen, at least locals heading to Al Khor will never have to worry about beach traffic. ■

LSU vs. Ole Miss: How to watch, numbers to know and storylines to follow...