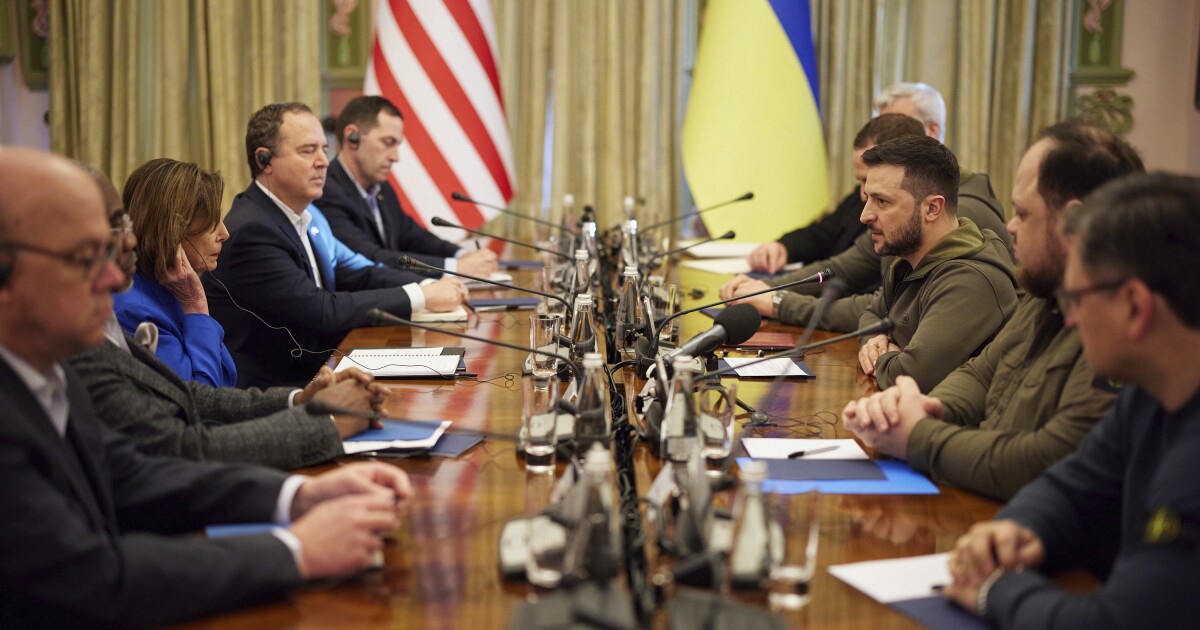 DENVER – On the heels of a secret congressional delegation trip to Ukraine over the weekend, Congressman Jason Crow said he believes Ukrainian President Volodymyr Zelenskyy will go down as “one of history’s greatest wartime leaders” and that the U.S. will stand with him to continue to provide weapons and training support for the fight to come.

The trip was the highest-ranking official U.S. congressional visit to Ukraine since Russia invaded the country in February. Crow, who also went to Ukraine in December ahead of the invasion, spoke with reporters Wednesday for the first time since the trip and called the it “a long and complicated journey.”

Crow, a former Army Ranger, said the delegation spent about four hours with Zelenskyy and his top advisers, and that he personally took a “deep dive” on security, weapons systems, and training for about 30-40 minutes with the Ukrainian president.

He said Zelenskyy and the U.S. delegation discussed three main goals moving forward: how to address the worsening humanitarian crisis in Ukraine; how to better support Ukraine through ongoing sanctions on Russia; and the future of the ongoing military support and weapons aid to Ukraine from the U.S.

The congressman said it was clear that Russian President Vladimir Putin was not going to stop his incursion, which has involved the bombing and killing of civilians, and that the Ukrainian military would have to stop him and the Russians on the battlefield as it shifts more toward the south and east, out of urban areas and into more long-range exchanges.

President Joe Biden has asked Congress for an additional $33 billion supplemental appropriation for spending on assistance for Ukraine for military equipment and economic assistance to help the Ukrainian people, which Crow said Wednesday would be imperative for Congress to pass.

Crow said Zelenskyy asked for more sophisticated and longer-range drones that can include multiple munitions and can return to bases to be rearmed. The U.S. has already provided Switchblade one-time-use drones and some others.

The congressman said Zelenskyy also asked for increased shipments of heavy artillery, including 155mm howitzers that are already en route, and multiple-launch rocket systems that Crow said “would have a devastating impact on the Russian military” and give Ukraine the ability to take back territory ceded to the Russians.

And third, according to Crow, Zelenskyy asked for Harpoon anti-ship missile systems to help clear the Black Sea and allow Ukraine to de-mine its ports, particularly in Odessa, so it can export its goods, including grains, to the rest of the world. Ukraine is known as the breadbasket for areas particularly in Africa and the Middle East, supplying most of those goods to those countries, and currently is mostly unable to get most of its goods out of the country.

“They provide grain and wheat and sunflower oil, and other critical components, for foodstuff. They are sitting on about 12 million tons of supplies and agricultural products that they’re unable to ship out,” Crow said. “And in addition to that, in June, July and August, they’re going to harvest a new season of agricultural products, but they do not have the ability to ship it out.”

Crow said the delegation spoke with Zelenskyy about providing more training through mobile training teams in order to rotate in and out smaller and more-junior Ukrainian forces for training on the newly provided weapons systems.

Crow said he did not hear anything Zelenskyy asked that the U.S. was not capable of and willing to provide, and said they did not discuss involving U.S. troops or a no-fly zone, which Crow said Zelenskyy knows is something the U.S. is not willing to do. Crow maintained he would not support putting any American troops on the ground because it would be too high a risk of escalation with Russia.

“This is a wartime leader who is fighting for his own survival and the survival of his country. He was serious. He was somber. He had a mastery of tactics of strategy of the military battlefield as it exists, of weapons systems and what could be used,” Crow said of Zelenskyy.

“In a very short couple of months he has become what I think will be one of history’s greatest wartime leaders,” Crow said. “…I think he has matured as a combat leader, as a wartime leader. He has learned how to lead under these circumstances, like many have had to do, in a very short period of time.”

In addition to the aid for Ukraine, Crow said it would be important to help nations like Poland that have willfully taken in millions of Ukrainian refugees and will need help in getting those refugees used to living in a new country that speaks a different language. Supplying that humanitarian aid, along with the military aid, would also be key reasons to pass the supplemental aid package, Crow said.

Ukraine accuses Moscow of “kidnapping” children amid the ongoing war

Traffic chaos forces closure of I-90 westbound from Mercer Island through...