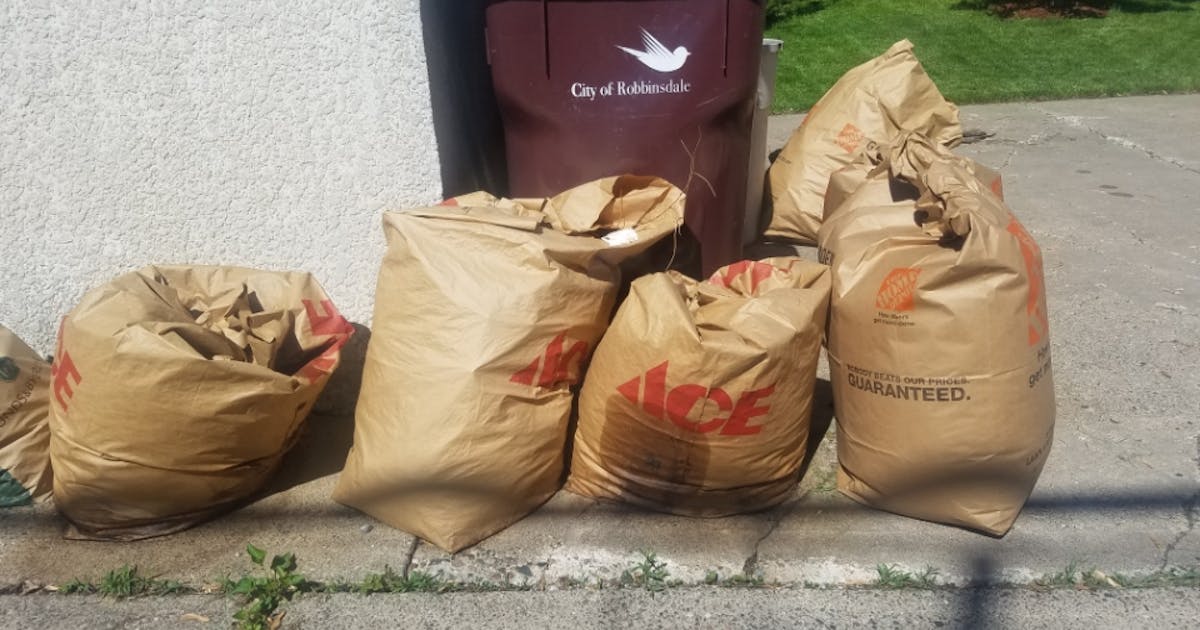 Drive through Robbinsdale and you’ll find piles of rain-soaked and tattered paper bags filled with rotting yard waste lining the streets and alleys.

By now, they were supposed to be gone.

Waste Management, the contractor the city hired for garbage service, had promised the City Council that it would conduct a citywide pick-up last weekend after the hauler suspended service in the city a few weeks ago. The city even mailed postcards to residents to announce the special collection.

But no trucks came.

“I feel like Charlie Brown when Lucy pulled the football away,” said Mayor Bill Blonigan, referring to the Peanuts comic characters. “They came to the City Council and told us they would come.”

Waste Management halted service in Robbinsdale and several other suburbs in early June, citing a staffing shortage. The company brought in drivers from other cities over the weekend to catch up on missed pickups, but did not service Robbinsdale.

Some residents said on social media the hauler came by Wednesday morning. The company did not respond to requests for comment.

David Ulbrich, who is running for City Council in Ward 3, said residents were annoyed and upset when service initially stopped. After Saturday came and went, people are fuming, he said.

“More people are getting heated after Saturday’s debacle,” said Ulbrich, who said he has eight to nine bags of lawn waste sitting on his property. “They want heads to roll.”

As the waste piles up and the smell has become “horrendous,” Ulbrich said, he’s trying to organize a convoy of trucks and trailers to pick up as much as he can in his neighborhood and take it to the city’s Public Works facility. The city has opened the facility two days a week to allow residents to drop off their waste in roll-off dumpsters.

“Somewhere there has to be an idea we can latch onto and rectify the situation,” he said. “I want to help resolve this.”

Ulbrich suggested Robbinsdale could use front-end loaders and trucks to haul away refuse, similar to St. Louis Park. Or they could follow Columbia Heights, where the city has a contract for lawn waste pickup with Waste Management but has arranged for a different contractor to come once a week.

“This is tough and frustrating for everyone,” said Columbia Heights City Manager Kelli Bourgeois. “It’s a service people expect and we have a contract.” To residents, she said, “thank you for your patience.”

Lawn waste pickup is not just a Waste Management issue. Municipal workers collect yard waste in parts of Minneapolis, and a staffing shortage recently led the city to cut service from once a week to every other week.

In Robbinsdale, Mayor Blonigan said officials are exploring several options, including teaming up with other cities for some in-house collection services. They could also look at setting up a deal with another hauler specifically for yard waste.

The city is under contract with Waste Management until 2025, and blowing up the contract is not a viable solution — in the end, it could cost residents more if the contract were canceled and put out for bid, Blonigan said.

Robbinsdale intends to take an “aggressive, fair and measured” response to collecting damages and levying penalties on Waste Management for not fulfilling its contract, Blonigan said. Residents will not be billed for missed pickups, he said, and the city will aim to recoup the cost of printing and mailing the postcards.

Blonigan said he, too, has heard from residents, including from one woman who was so excited when she thought Waste Management was coming that she trimmed her trees ahead of the anticipated pickup.

“Now she has nine bins of rotting stuff. She’s so mad,” Blonigan said. “You have every right to complain. We are doing the best we can.”

Shares of Continental Resources jumped 8% after the company received an offer from Harold...

Annual inflation in the eurozone reached 10% in September 2022