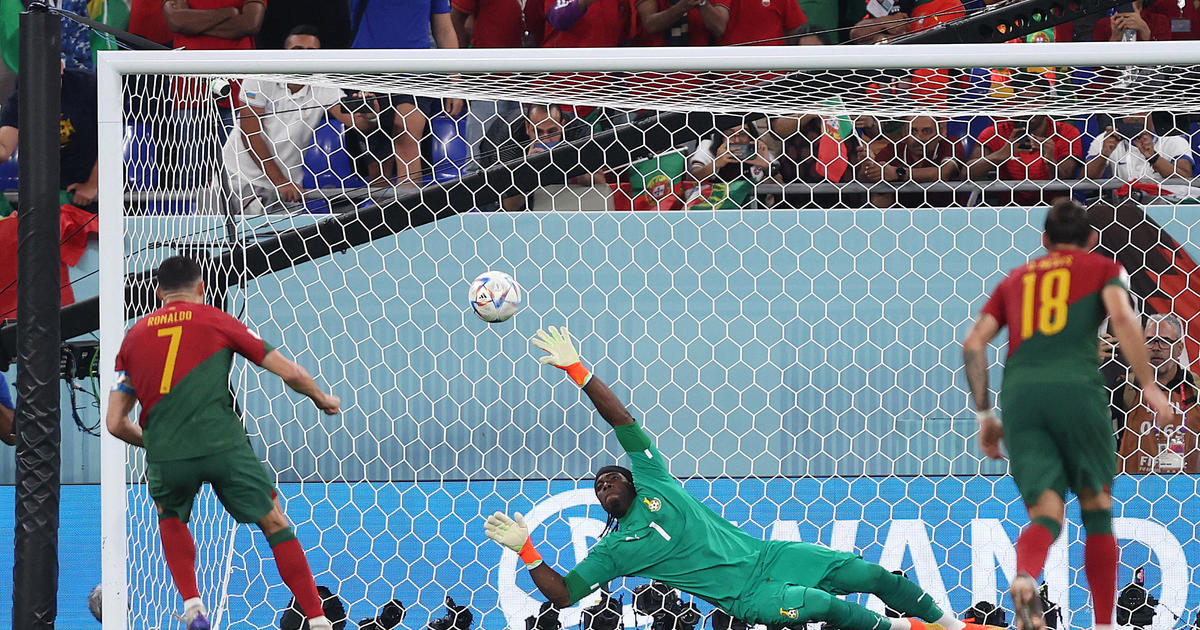 Cristiano Ronaldo closed his eyes, took a deep breath and did it World Cup history.

The Portugal striker became the first man to score in five World Cups with a 65th-minute penalty in Thursday’s 3-2 win over Ghana.

A few days after his contract was terminated to Manchester United after a tell-all interview, he let his football do the talking at the start of what is likely to be his last World Cup.

“It was a wonderful moment,” Ronaldo said. “The world record, the only player to score in five World Cups, makes me proud.”

Flying away after the ball hit the back of the net to give Portugal a 1-0 lead, a smiling Ronaldo performed his usual leap and flip in the air – the crowd roared his signature “SI-UUU” as he pirouetted – before being mobbed on the sidelines teammates.

He has now scored at every World Cup since the first one in 2006, when a penalty against Iran started his streak of goals at the tournament, which now stands at eight in 18 matches. He has the men’s record of 118 goals at international level.

“I think Cristiano is a phenomenon, a legend,” Portugal coach Fernando Santos said. “In 50 years, we will continue to talk about him.”

His latest goalscoring record adds glitter to a CV that should ensure Ronaldo receives plenty of offers from new clubs following his break with United on Tuesday. It came after he gave an unauthorized interview to Piers Morgan in which he criticized the manager, owners and his team-mates at the English club.

His tough preparation for the tournament didn’t seem to affect Ronaldo against Ghana, even if he wasted two clear chances in the first half.

“It was the week that closed the chapter (with United),” Ronaldo said. “It’s closed and now I want to start with a good foot forward. We started, we won, I want to help my team and everything else doesn’t matter.”

Ronaldo finished the match with his head in his hands in pure relief after Ghana nearly pulled out a draw in the ninth minute of stoppage time thanks to some finesse.

In the final action of the game, Ghana striker Inaki Williams ducked behind Diego Costa as the Portugal goalkeeper rolled the ball on the ground and prepared to score. Williams beat Costa and, despite slipping, managed to punch the ball towards goal.

Portugal defender Danilo rushed back and cleared the ball off the line, while Ronaldo, sitting in the dugout after being substituted, watched in disbelief.

All the goals came in the last half hour, with Andre Ayew equalizing for Ghana eight minutes after Ronaldo converted his penalty after being brought down by Mohamed Salisso.

Ghana coach Otto Addo called the penalty “a special gift from the referee”.

Joao Felix restored Portugal’s lead in the 78th minute after a through ball from Bruno Fernandes, who then set up Rafael Leao to add a third. Osman Bukhari reduced Ghana’s deficit in the 89th, celebrating in comical fashion by doing Ronaldo’s “SI-UUU”.

THE STRUGGLE OF AFRICA:

None of the five African teams at the World Cup have won their first match in the group stage. Ghana lost, as did Senegal and Cameroon, while Tunisia and Morocco drew. “They didn’t win, but I could see they could compete with the opposition,” Addo said. “I hope we can improve.”

Inaki Williams made his first start for Ghana a day after his brother Nico came on as a substitute in Spain’s 7-0 win over Costa Rica. This year, Inaki Williams switched allegiance from Spain to Ghana, the country where his parents were born and left decades ago when his mother was pregnant with him.

Portugal will play Uruguay on Monday. Ghana will face South Korea on the same day.

Local Couples Worry About Future of IVF After Fall of Roe v. Wade –...

Get Caught on the Catchy Hooks of Doubter’s Debut EP