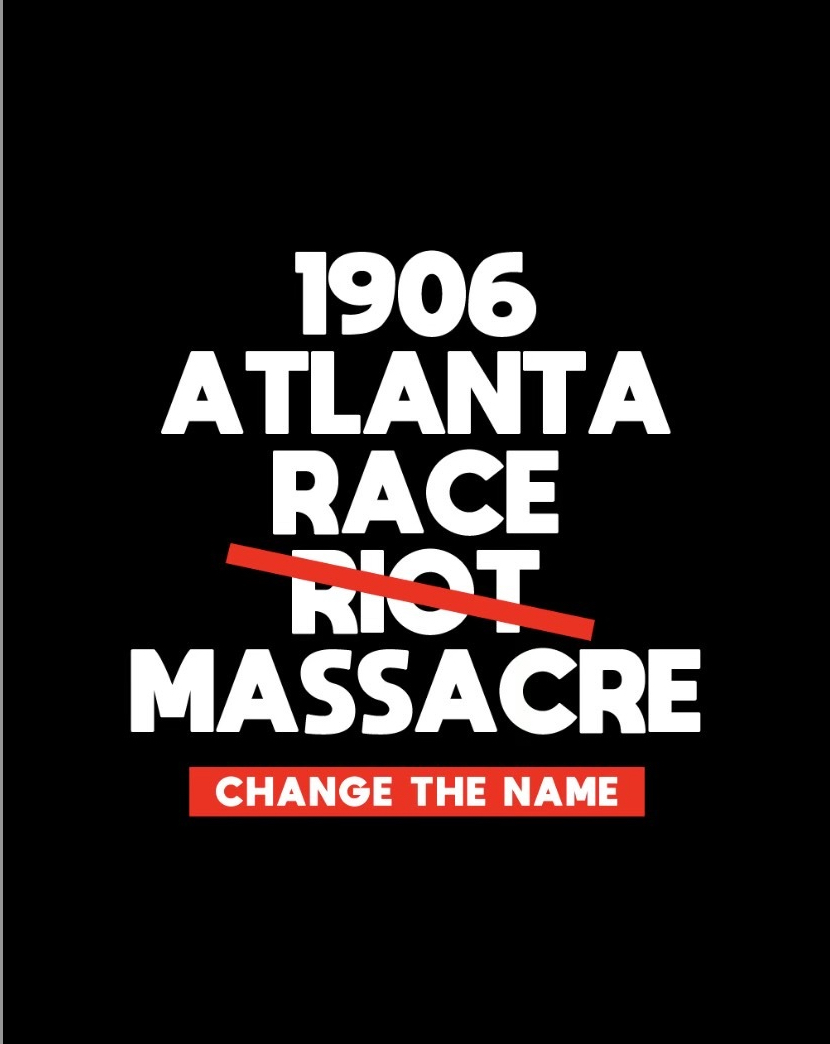 “A city lay in travail, God our Lord, and from her loins sprang twin Murder and Black Hate. Red was the midnight; clang, crack and cry of death and fury filled the air and trembled underneath the stars when church spires pointed silently to Thee. And all this was to sate the greed of greedy men who hide behind the veil of vengeance!”

116 years ago on September 22 Georgia gubernatorial candidates Hoke Smith, former publisher of the Atlanta Journal, and Clark Howell, editor of the Atlanta Constitution, used the power of the  media, then only white, to convince the city’s white citizenry to disrupt and dismantle Black civil and economic rights. By publishing allegations that four white women had been assaulted by black men, Atlanta erupted into racial terror. The events of the 1906 race riots are not widely known in Georgia nor Atlanta’s public history, despite the lingering effects such as income inequality, mass incarceration, health and housing disparities in a majority of Atlanta’s Black  communities.

The efforts to bring back into public memory one of the most horrific events in Georgia’s history began in 2006 at the Centennial Ceremony. Many community historians and grassroots organizations came together to commemorate the lives lost and acknowledge the often overlooked piece of Atlanta history. Today the Coalition to Remember the 1906 Atlanta Race Massacre and Fulton County Remembrance Coalition is still carrying the torch to embark upon continuing the truth-telling efforts.

In the past few years, nationally, we have seen other communities take that same approach to remember the history of Black residents by exploring the narratives and in many cases changing the name of the event to describe a more accurate history. Examples such as the 1921 Tulsa Race Massacre and Elaine Massacre.

“It is important to learn and share the stories of racial terror, such as the 1906 Atlanta Race Massacre, to build a more complete narrative of this city,” Allison Bantimba said. The co-founder of the Fulton County Remembrance Coalition, added, “Without them we are left to understand current instances of injustices as isolated issues without the necessary context to correctly address them.”

The 1906 Atlanta Race Massacre (commonly referred to as the Atlanta Race Riots of 1906) started on the night of September 22nd and lasted through September 25th. Black residents were violently terrorized during the massacre, as white mobs roamed through downtown Atlanta and into predominantly black neighborhoods, burning houses, destroying black-owned businesses, and lynching any black person unfortunate enough to be in the mob’s path. While over 25 African American people are documented as being lynched that weekend, many estimate that there were closer to 100 total victims.

During this year’s remembrance events, Atlanta journalist and documentrian, King Williams took five “1906 Legacy Descendants” Yolanda Walker and Pat Walker; descendants of Alex Walker, Ralph Baker; descendant of Jesse Max Barber, Farrow Allen (decendant of Luther J. Price), on a bus tour of Atlanta into the areas where their families once lived before the mob of 10,000 white men and boys, forever changed their families lives.

The mob’s focus was not only on one person but a full attacks on Blacks and their families, neighbors, or any and all black people in the area. The mob moved out from Five Points area of downtown Atlanta well into 8 miles south into the City of East Point, they attacked, destroyed, and looted black-owned businesses, throwing stones and bricks through windows and using knives, firearms, and other weapons to attack any Black in the area.

“The South has a job to do, ” says Pat Walker, the granddaughter of Alex Walker. “And the job of the South is to tell the true story about what happened to us in full. My grandfather had to flee the south to Chicago because of this massacre.”

As she stood on Gammon Avenue with her sister Yolanda hoping to pull back far enough into their generational memory to imagine their grandfather’s life before the 1906 Atlanta Race Massacre, Walker added, “How different would our lives have been if we were able to stay here in Brownsville?”

On the night of third night of the 1906 massacre, Brownsville residents experience terror the the mob.

Black clergy and civic leaders and white officials met privately to discuss plans for ending the terror, and the city’s Chamber of Commerce held a public meeting. Though the riot had been the product of white mob brutality, fueled by sensationalized narratives of racial hostility spread by the white press, these meetings insisted on a narrative that the violence was due to black Atlanta residents’ failure to protect white women. The Chamber of Commerce conversations also revealed that, among white residents, the primary incentive to end the riot was to end its disruption to local business.

In the aftermath of the 1906 Atlanta Race Massacre, over 250 Black men were jailed, forced migration to other parts of the nation as well as the City of Atlanta. Racial voting laws were created and a great deal of generational wealth was lost in the African-American communities. However, the loss of life was the ultimate sacrifice. We remember these lives of

100 years later the city would formally recognize the crimes that took place those faithful days. 116 years later, with all of these documented accounts of the 1906 Atlanta Race Massacre, it is still one of the most untalked about events in Atlanta’s history.

We know these four days and three nights in the city’s history as “1906 Atlanta Race Riots.” Now, with the national eyes redifing history through truth-telling incentives such as the Equal Incative, we are able to look into personal accounts on the early 1900’s are realize the racial terror that was carred out on those horrific days in 1906 still viable in our city today.

Fulton County Rememberance Coalition in partnership with The Equal Justice Initiative have received reports such as “Lynching in America” are able to now know some of the horrific accounts of many that were killed during the four-day massacre.

“While looting a pawn shop, a mob of more than 75 white men saw Milton Brown and began chasing him down Peters Street during the massacre. Mr. Brown was shot three times–in his chest, head, and shoulder. Members of the Atlanta Police Department witnessed Mr. Brown’s attack but did not intervene. News reports stated that as Mr. Brown was waiting for an ambulance, he stated that he “knew nothing of the trouble going on and that the attack on him was wholly unexpected.” He died before an ambulance arrived. He worked for the Stocks Coal Company as a laborer and was walking back to his home on Morris Street from a friend’s house on Castleberry Street”-Lyniching in America, The Equal Justice Initiative

Three years after the Massacre the National Association for the Advancement of Colored People (NAACP) would be formed, with an Atlanta professor and author, W.E.B. DuBois as one of its founding members.

Event Kicks off This Weekend in Roxbury, MA – NECN