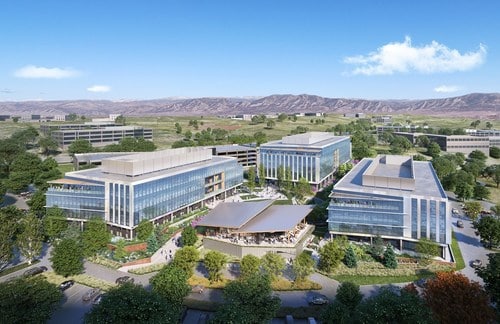 This story first ran on BizWest.com, a BusinessDen news partner.

“Our purpose-built campus will include tenant spaces designed specifically to accommodate lab/life science or tech uses,” Lincoln senior vice president Scott Caldwell said in a prepared statement. “Companies won’t need to rehabilitate or convert old office or industrial space; these facilities will be on the cutting edge of critical environments for a broad range of uses.”

The buildings will be between two and five stories.

“The developer has described the diagram of the site as keeping pedestrians at the center, then buildings, then service and a ring road, followed by surface parking along the perimeter of the site,” according to planning documents. “They have noted that the building orientation reinforces views to the mountains and aims to minimize solar glare and natural heat gain on the western facades.”

Plans call for a garage with five parking levels that will have a capacity for approximately 900 vehicles, according to Broomfield planning documents.

Amenities are expected to include a fitness center, locker rooms, bike storage, a tenant lounge with fireplace, an outdoor terrace, a conference/training facility and a food market.

CoRE is the latest example of the Boulder Valley’s emergence as a world leader in biotechnology.

Part of the regional biotech emergence has involved developers committing to building office and lab space specifically tailored to the needs of life-sciences companies. For example, Boulder developer Conscience Bay Co. LLC is in the process of planning West Meadows, a 112,423-square-foot, biotech-focused project at 3825 Walnut St. in Boulder.

Assuming the project is approved by Broomfield City Council, Lincoln Property expects to begin construction in the fall with completion anticipated in 2024.

Aces look to get back on track vs. Fever