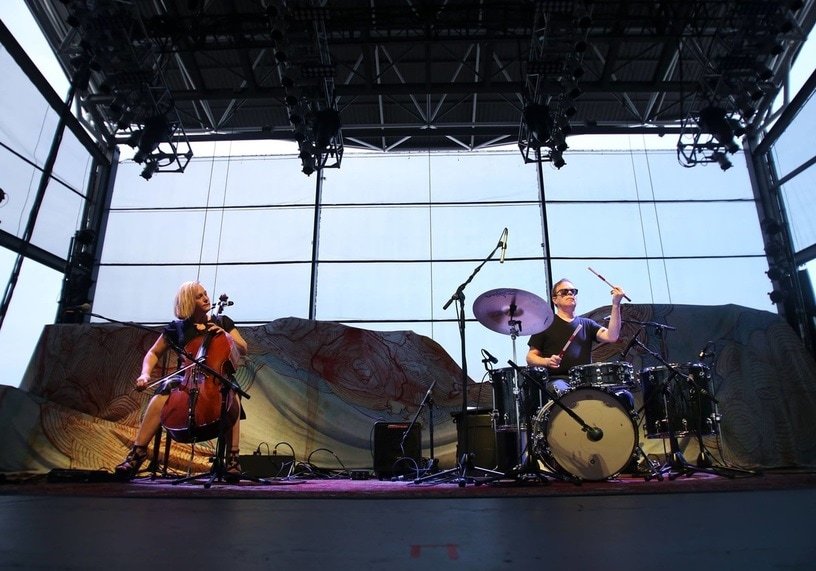 A parade on the river, a 95th birthday celebration, new music from Fallen Down Angels, Doors Open Milwaukee, a nod to the late great Paul Setser, legends Billy Cobham and Lucinda Williams and more—This Week in Milwaukee!

Having recently played a river cruise, this show is the last one on the books for Bruce Humphries and the Rockabilly Rebels before concentrating on a new album. It is also the penultimate show of the Thursday Bike Night Concert Series. Revved-up rockabilly music in Harley-Davidson’s backyard—what could be more fitting?

Cellist Janet Schiff and drummer Victor DeLorenzo continue to push boundaries arbitrarily known as musical genres. A 2021 Fringe Festival performance, outdoors at the at the Marcus Performing Arts Center and Peck Pavilion, included a moment of unplanned brilliance, when an approaching boat set off a ringing alarm on the Kilbourn Avenue drawbridge. DeLorenzo nodded in time and began the song with that cadence. At the end of the tune Schiff faded out and the drummer resumed a duet with the bridge bell. Adding Matt Meixner, MONIA and Christopher Pipkins to the mix will only make things more interesting.

This benefit for the American Heart Association corrals a wide swath of talent, presuming to put their spin on the songs of Bruce Springsteen, whose sound can be as intimate as the 3 a.m. folk songs of Nebraska to the Phil Spector-symphonics of “Born to Run” to the techno-blues of “Dream Baby Dream.” The evening’s lineup includes the Soul-Folk of Bryon Cherry Band, the brotherly sounds of the Johnston Brothers and Chris Haise Band’s modern spin on classic and folk rock .

Like his hero, Walt Whitman, Milwaukee songwriter David J. Thomas contains multitudes. He worked the door at famed music club The Starship where he ran errands for Sun Ra’s Arkestra. He met Post-Punk and Industrial music head on with outfits The Kingdom, The Power, The Glory and River of Doubt; opened an Animal House toga party for Otis Day & the Nights and took to Americana before it was fashionable with The Screaming Lillies. A few years back he reunited with bassist John Reilly and drummer Anthony Vella to form Fallen Down Angels—the trio preview songs from their upcoming CD at this show.

This unique twist on the traditional family favorite features a parade of floats that really float! Art installations have been carefully crafted by local artists and performers to celebrate and honor the waterways we love. This year’s theme “Clean Water in the Cream City” honors the 50th Anniversary of the Clean Water Act, including a float performance by TRUE Skool, Inc.

Alive at Eight—What Would Setser Play? @ Circle A, 7 p.m.

“Who wants to hear another song?!!” It was like clockwork. You could bet next week’s paycheck on it. When the band played their last song at Circle A’s long-running “Alive at 8” series, soundman/doorman/emcee Paul Setser would rouse the crowd and ask for an encore. Setser, who died in 2020 shepherdexpress.com/music/local-music/milwaukee-musician-paul-setser-passes-on, will be remembered in the humble Riverwest music room where he was most familiar. A night of Setser-inspired music and DJ spins will only scratch the surface of all the music he consumed and created.

Those lucky enough to latch onto Lucinda Williams’ music early on have witnessed an artistic arc with few peers. By the songwriter’s third album she was set on a path that reached new heights with 1998’s Car Wheels on a Gravel Road. Her blend of gritty, genuine characters is the yin to the yang of her pervasive sense of humanity.

An intimate 2006 performance at the Pabst, accompanied with only guitarist Doug Pettibone, was Williams at her most unvarnished genius. She’s toured and recorded seemingly non-stop until a stroke slowed her down in 2020. Starting in 2021, Williams has amazingly released six Lu’s Jukebox albums paying tribute to Southern Soul, classic Country, Bob Dylan and The Rolling Stones.

Known as “The Underground City” for good reason, Landmark Lanes celebrates its first 95 years with a grand celebration, through Friday: shepherdexpress.com/culture/happening-now/landmark-lanes-celebrates-95-years-of-serving-milwaukees-fi. Home to a 16-lane bowling alley, 10 pool tables, three separate bars, darts, a music venue and a bunch of retro arcade games. Nightly events will be held at Landmark from Sept. 26 through Sept. 30, including stand-up and improv comedy, a showing of The Big Lebowski, at neighbor Oriental Theater and Ian’s Pizza.

Legendary drummer Billy Cobham’s Crosswinds Project blows into Milwaukee. Cobham’s resume includes work with Horace Silver, Miles Davis and Mahavishnu Orchestra and his own band Spectrum. Consider this a rare chance to experience a musician of the highest caliber in a small club.