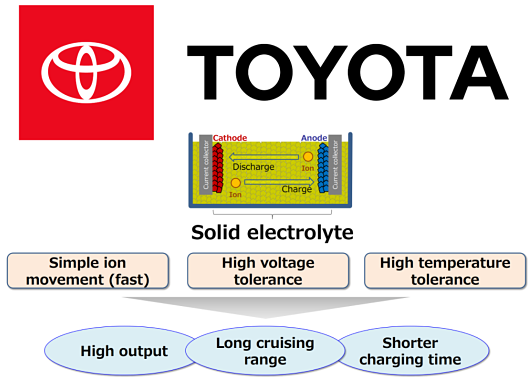 Toyota Motor Corporation (NYSE: TM) plans to spend $13.7 billion by 2030 on development next-generation batteries and manufacturing equipment as part of a bid to capture a larger share of the growing electric vehicle market.

On Tuesday, the Japanese automaker said it was working on mass-production technology solid state batterieswhich Toyota believes will help drive electric vehicle production because they are more energy-efficient, charge faster and are less prone to catching fire than current technology.

“By creating development and supply systems, we will promote the spread of electric vehicles, including BEVs [battery electric vehicles]Masahiko Maeda, Chief Technology Officer of Toyota, said. “We focus on safety, durability and high quality and produce high quality, low cost and high performance batteries. Toyota places the highest priority on batteries that customers can use with peace of mind.”

As part of the investment, Toyota plans to build 70 electric vehicle battery lines by 2030 and aims to provide 200 gigawatt-hours (GWh) of battery supply by then, up from a previous target of 180 GWh.

It also wants to reduce the cost of its batteries by at least 30%, mainly due to lower cost of materials and a more efficient method of structuring the battery cells.

Maeda said the company adjusted its targets based on the potential of battery electric vehicles, which are “spreading faster than expected.”

“Zero-emission vehicles are important in regions where renewable energy is widespread,” Maeda said, adding that Toyota is “preparing a full line of CO2 vehicles with reduced emissions’.

By 2030, Toyota plans to sell 8 million partially or fully electrified vehicles. According to the automaker, 2 million of those vehicles will be powered entirely by fuel cells or batteries, and the remaining 6 million will be hybrids or gasoline-electric hybrids.

Toyota, an early pioneer in electric vehicles, has since fallen behind rivals in the race to bring more electric cars to market and has faced criticism for being slow to adapt to a changing industry.

Earlier this year, the company unveiled a plan that calls for 15 new battery electric cars will be released by 2025.

Toyota’s new target is still 200 GWh does not reach targets of some rival automakers, notably Ford Motor Company and Volkswagen, both of which are aiming for 240 GWh of battery supply by 2030.

Lightyear takes audiences to infinity and beyond the average spinoff backstory

Christophe Doir was found beheaded in France in 1995. His widow had just...