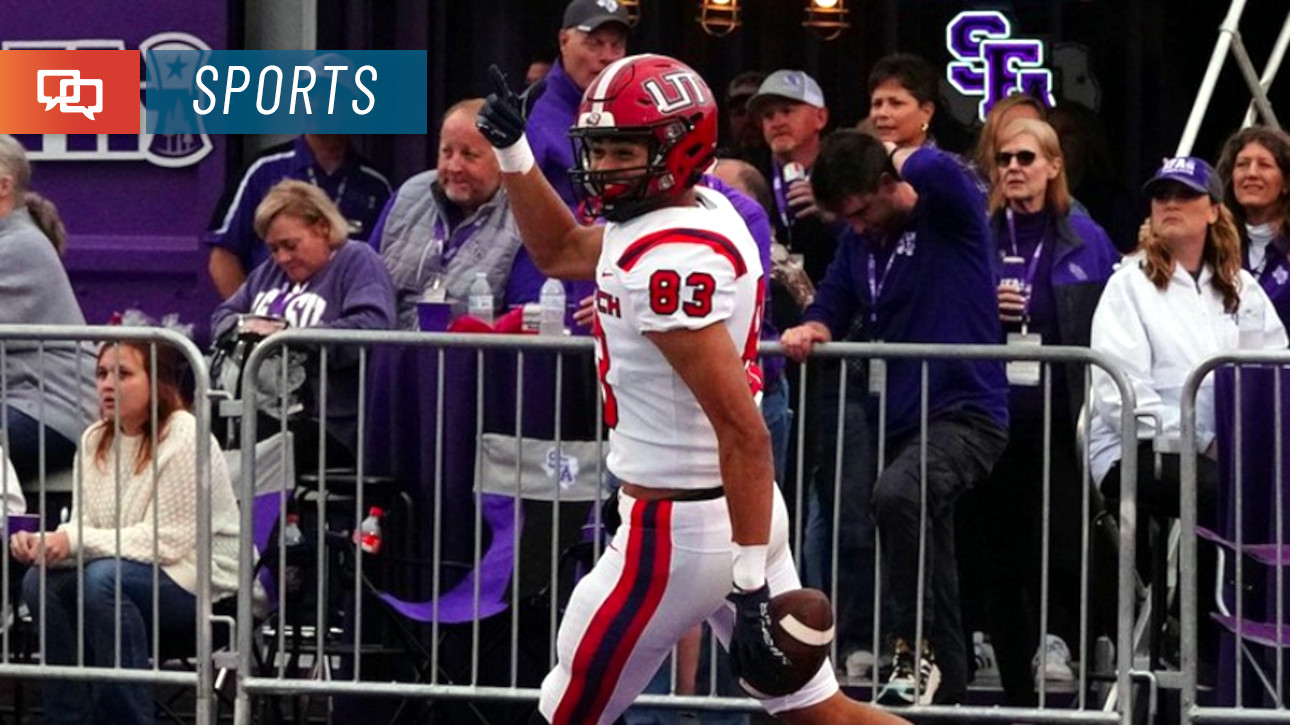 ST. GEORGE — Victor Gabalis tied a Utah Tech single game record with five touchdown passes and threw for a career-high 377 yards as the Trailblazers upset No. 19 Stephen F. Austin, 47-44, in a pre-Halloween thriller on Saturday afternoon at Homer Bryce Stadium.

UT, which punted on its first possession, turned the early turnover into points when Gabalis threw a 4-yard fade to Joey Hobert on third down. However the PAT was missed as the Blazers took a 6-0 lead.

SFA quickly answered on its next possession with a Chris Campos 45-yard field goal, then after a UT three-and-out, the Jacks took a 10-6 lead after a Jerrel Wimbley 4-yard touchdown run.

The Trailblazers counterpunched right back, needing only three plays to go 60 yards to jump back on top at 13-10. Sophomore running back Quali Conley rushed for 34 of his game-high 131 yards to open the drive. Then after a 2-yard Conley run, Gabalis lofted a 24-yard strike over two defenders to Hobert in the corner of the end zone.

Utah Tech’s special teams got into the act on SFA’s next possession, when after another Jacks three-and-out, freshman Jaxson Smith came around the right side and blocked the Max Quick punt, which set the Blazers up at the SFA 30.

UT once again cashed in the short field for points with a Conley 1-yard dive, his team-leading sixth rushing touchdown of the season, to extend the Blazer lead to 20-10 early in the second quarter.

SFA clawed back with 10-unanswered points thanks to another Wimbley TD run and a Campos 37-yard field goal to knot the score at 20-20 with 1:10 to play in the half.

Utah Tech then dodged a major bullet on the ensuing kick-off, which after a misplay left the Blazers at their own 1-yard line. Gabalis quickly gave UT some breathing room with consecutive completions to Hobert of six and eight yards. Then Conley carried the pile nearly 14 yards for another first down at the UT 29.

Gabalis followed that up with a 44-yard completion to Deven Osborne along the UT sideline to the SFA 27 with five seconds on the clock. Connor Brooksby would come on and nail and 44-yard field goal at the gun to give Utah Tech a 23-20 lead at the intermission.

UT’s defense got off to another strong start to open the second half, forcing a Lumberjack three-and-out, and the Blazer offense capitalized with another quick three-play scoring drive to push the advantage to 30-20.

Gabalis found David Fisher alone down the sideline for a 32-yard on the very next play and hit a wide-open Rickie Johnson over the middle for a 30-yard touchdown strike.

Trailing 33-23 at the start the fourth quarter, Self completed a pass out in the flat to Darryl Simmons. Simmons crossed the 10 to the 6-yard line, where Malaki forced his second fumble of the day, recovered by senior defensive back Darrius Nash.

UT came up empty in its ensuing possession and punted to preseason WAC player of the year Xavier Gipson, who fielded it at the SFA 15 and returned it all the way back 85 yards to pay dirt to trim the Blazer lead to 33-30 game 8:58 remaining.

The Trailblazers ripped the momentum right back two plays later when Gabalis hit a streaking Daniel Thomason for a 72-yard pitch-and-catch to again make it a two-possession game at 40-30. Thomason blew right by his defender and found himself all alone at midfield, where Gabalis hit him in stride and the freshman raced to the end zone for his first collegiate touchdown.

SFA later answered with two Miles Reed touchdowns in consecutive possessions wrestle the lead back at 44-40 with 2:19 to play. Reed’s first score came on a 13-yard completion from Self, then after a Blazer punt, the Lumberjack running back rambled 47 yards to give his side the lead.

Armed with two timeouts and just over two minutes to play, Gabalis led the Trailblazers on their eventual game-winning drive, which got kick-started by an SFA pass interference penalty. The sophomore quarterback then hit Johnson for a 6-yard completion before completing a 29-yarder to Hobert to the SFA 25.

Gabalis dumped a quick 4-yard pass to Hobert at the SFA 10, and the sophomore receiver turned up field and wrapped the ball around the pylon as he was hit at the goal line. The officials ruled touchdown, and after the Brooksby PAT the Blazers went back up three with 47 seconds left.

SFA mounted on last push and drove the ball all the way to the Blazer 1-yard line after Self completed a check down pass to Reed, who was upended short of the goal line when time had seemed to expire.

However after a video replay review, Reed was ruled down at the 1-yard line with one second on the clock. SFA called timeout and elected to play for the win.

Self took the snap, faked a run up the middle and tried a jump pass to his tight end Kesho Williams, but freshman defensive lineman Justin Kirkland swatted the pass away in the end zone and the Blazers escaped with the big road victory.

Conley carried the ball 23 times for his 131 yards, which was his fourth 100-yard game of the season.

Meanwhile Hobert recorded his fifth 100-yard receiving game of the year, catching nine passes for 109 yards and those three touchdowns. Hobert now has 10 touchdown receptions on the season, which leads the WAC.

Sophomore linebacker Will Leota led the Blazer defensive effort with a career-high 13 total tackles, while Malaki padded his all-time program career tackles record with 10 stops (287) to go along with his two forced fumbles.

Utah Tech will close out its 2022 home slate with a two-game homestand, beginning with a Homecoming non-conference showdown vs. in-state rival Southern Utah next Saturday night, Nov. 5. Kickoff inside Greater Zion Stadium is set for 6 p.m.

Arbitrator recommends $32.4M to victims of deadly 2021 crash in Westport