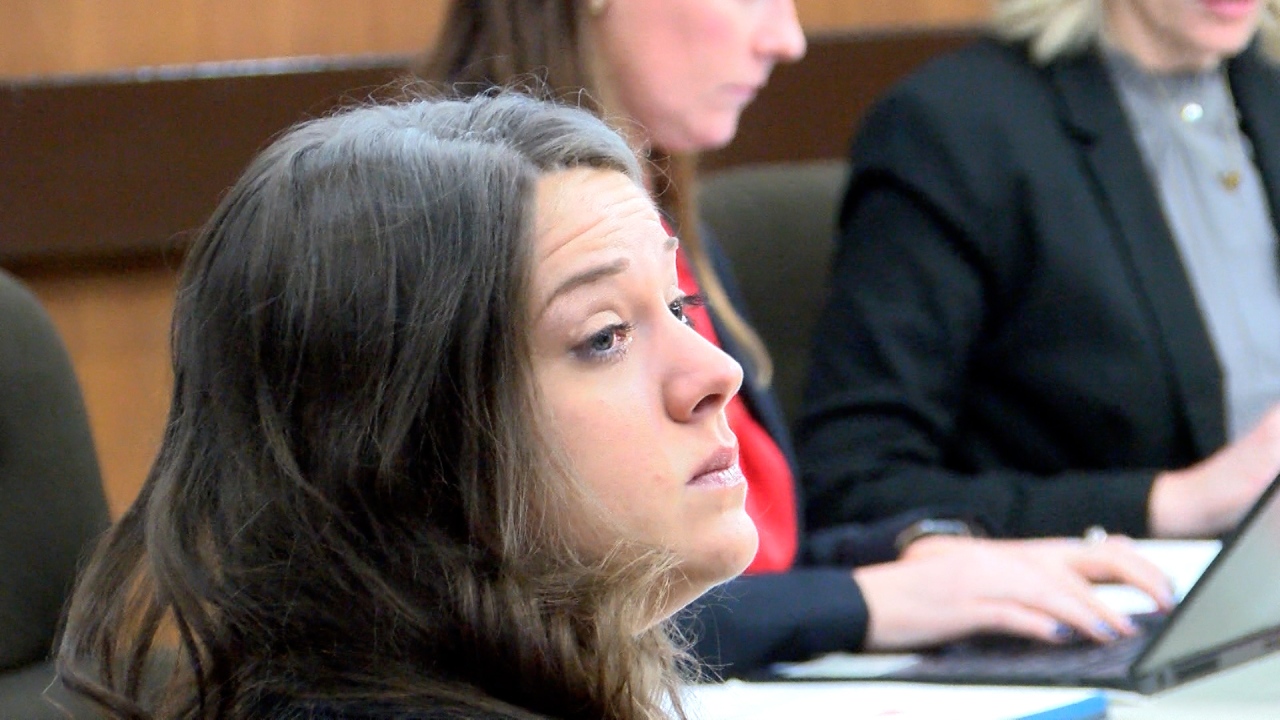 KTAL NBC 6 Digital Anchor Brittany Defran is sitting down Friday afternoon at 4 p.m. with Carolyn Roy, who has been in the courtroom since the trial began. Watch live in the player above or join the conversation on the KTAL NBC 6 Facebook page.

Prosecutors spent the first week of laying out the timeline leading up to the murder and establishing a motive: that Parker faked her pregnancy to keep her boyfriend from leaving her.

This week, they focused on presenting evidence to the jury that places Parker at the crime scene and proves she faked her pregnancy. On Thursday, jurors reviewed photos and video as former Bowie County Sheriff’s Office investigator Chad Ford walked them through the crime scene.

“It was probably the bloodiest crime scene I’ve ever been to,” said Ford.

Hancock’s right arm was under her forehead. Her left arm was outstretched over her head. Ford testified that he could see apparent puncture stab wounds and a cut in her side deep enough to expose layers of fat. It was clear her injuries were not survivable. There were no signs of life. Paramedics never entered the house, Ford said, because they wanted to preserve the crime scene.

“It was a very shocking crime scene,” Ford said on the stand. “I believe the statement was, ‘No one could have survived that.”

They didn’t realize immediately that the baby had been taken. But when someone told Ford that she was pregnant, he tried to crouch down to see if the baby was gone without disturbing the crime scene before evidence could be logged and collected. Her belly should have been rounded and firm. Instead, it was sunken in.

He went back outside to find out what trimester she was in. When he learned she was 36 weeks along, he called LifeNet back to the scene.

Video recorded at the scene and played in court Thursday showed LifeNet paramedic Jarrod Nall rolling Hancock’s body over and checking for a baby. Her belly was cut wide open, and there was no baby.

Ford says it all broke loose from there. He put out the call to alert every hospital, clinic, and women’s health facility within 100 miles. At the same time, 13.5 miles away in De Kalb, LifeNet EMT Paramedic Elton Crosswood was trying to get baby Braxlynn’s heart beating.

Nall says he heard that call on the police radio.

“I heard one of our units responded earlier to an infant cardiac arrest. I just kind of filed it away. We don’t have to deal with deceased babies that often, so it’s notable. It was all very suspicious to me,” Nall testified. “Several things that don’t happen that often in a short period of time were happening.”

So, Nall says, he says he reached out the crew that transported the baby.

“Our DOE was pregnant and had no baby,” Crosswood recalls Nall telling him.

Before he even had to ask, Crosswood told him something was not right about the woman claiming to be the baby’s mother. He did not believe she had just given birth. The placenta was down her pants, and she was refusing to let doctors examine her.

“It was more than enough for me to think, ‘Oh my God, this is all connected,” Nall testified.

Nall’s next call was to the New Boston Police Department. But someone else had already made the connection and investigators were on their way to the hospital in Idabel.

Crosswood told the doctors, who examined Parker and determined she had not just given birth.

The state is expected to wrap up its case next week. After that, it will be up to Parker‘s attorneys to present their case in her defense. So far, jurors have heard from 50 witnesses and more than 200 pieces of evidence.

Do you have a double? Scientists discover that fraternal twins are likely to...

Tunisia is voting on a new constitution that could strengthen the power of the...

The popularity of ETFs is reaching records

The British Fashion Council has appointed David Pemsel as its new...